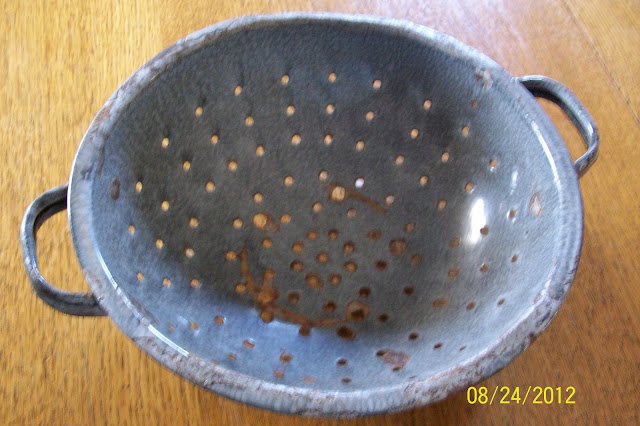 I know, I have been MIA from this blog for quite awhile First I was 'busy' watching the Olympics. But they have been over for awhile. Then I had a lot of catching up to do around the house, and everything else. I have thought about this blog but had not come up with any ideas, so I have been silent.
Today I had to run to the next town for an eye doctor appointment. On the way in I saw a rummage sale sign so thought I would check it out after my appointment, which I did. I have not been to a rummage sale for several years, mostly because I haven't had the energy to traipse around the area and get in and out of the car several times. This was the only sale so made a point to stop.
This is her second day for the sale so there wasn't much left. She did have the enamel strainer that is pictured - asking $1.50 for it. I asked if she would take $1 and she agreed. I told her I wasn't sure what I was going to do with it yet, and she suggested hanging on the wall and putting a bird nest inside toward the bottom. Good idea! I was thinking along the line of hanging on the wall or using it for part of a centerpiece. So I have added one more project to my long list.
She also had two old oak tables and one had a set of four chairs and the round table had two chairs. I don't need another table but do need some different chairs as mine are falling apart even though they have been reglued many times. She wants $75 for the square table with one leaf and 4 chairs. I asked if she would sell the chairs separately but she doesn't want to break up the set. Maybe I should have left my phone number in case she doesn't sell them and would later be willing to sell the chairs. They aren't as 'pretty' as the chairs I have but seem to be much sturdier, which is what I need.
Now I am in the mood to go rummaging. My town is having city wide sales next week, so if the weather cooperates, I may be making the rounds.﻿
Posted by Lorita at 12:42 PM 2 comments: