Around 1957 or 1958 my mother and her sister from southern Illinois flew to California together. I remember riding to Chicago with Mom and her brother-in-law, where we went to my cousin's home. She is the daughter of Mom's sister, who met as there. Then Mom and her sister got on a plane at O'Hare airport, and went to visit their parents in San Mateo, CA. I remember we ate over the many-laned freeway! Yes, there was a restaurant built above the highway.

I don't remember details, but I think Grandma might have been in the nursing home, the same one as Grandpa was in, by that time. So Mom and her sister were going to see them both for the last time, as Grandma died in 1959 and Grandpa in 1961. When they were there, they must have gone to their house and went through things before selling it, because Mom brought home a braided rug that Grandma had made. And that is probably when she got some of the old pictures. But you know, at that time I was busy in high school, and boys, and concerned about my own life, that I did not pay much attention to what was happening with adults.

One thing I do remember is that Dad and I had to 'batch' it while she was gone. I had never really cooked a meal before. I loved to bake and that was the extent of my cooking at the time. And Dad didn't really know how to cook either. He tried making pancakes one day, and he called them blow out tire patches. They were a bit, well a lot, rubbery. :o) I tried frying bacon and eggs. The eggs were crisp and the bacon soggy. I don't remember what else we cooked or ate, but I am sure it was not so great.

And speaking of food, below is the breakfast menu on the flight that Mom and Aunt Clara took. I know this was the first airplane ride Mom had, and probably the only one. The general public, unless rich, did not fly as much back then as we think nothing of doing today. So it was a big deal. Planes were a lot different then, too.

Can you remember not too many years ago when you got some fairly good meals on flights that were included in the price of the ticket? Now you are lucky if you get a meal at all, or else if you want to eat, you had to pay for it on the plane and it isn't cheap!

Back in the 1950's it looks like meals were quite a deal, even with a menu! 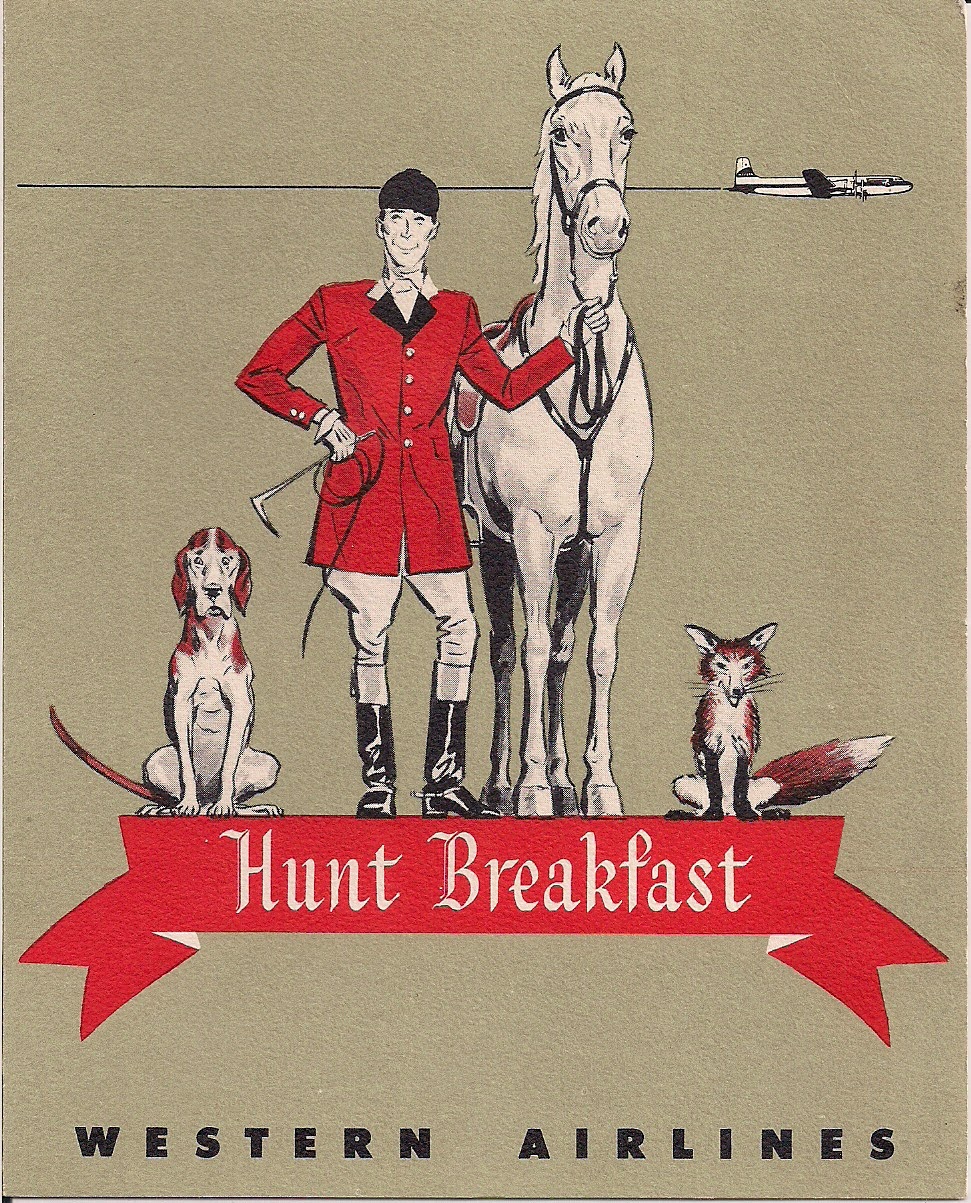 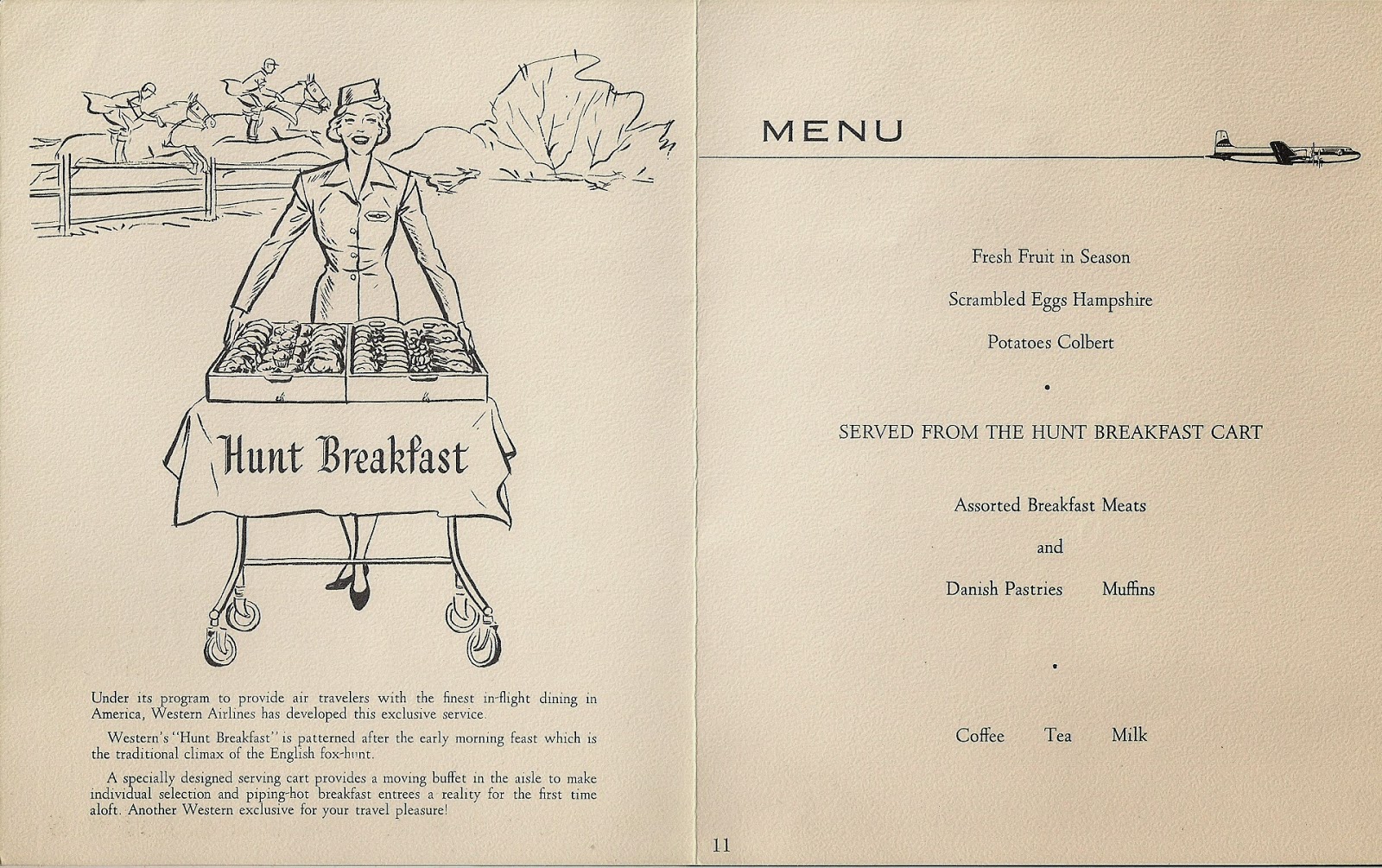 Interesting menu? I had no idea what Scrambled Eggs Hampshire or Potatoes Colbert were, do you? So I did a google search and did not find very much, but this is what I did find --

Eggs Hampshire is found on the menu of Benedict's Restaurants in Greenwood Village, Colorado, for $9.50. It is described as scrambled farm fresh eggs, diced ham, cream cheese and chives.

Interesting. I have never used cream cheese and chives in scrambled eggs, but it does sound good.

I couldn't find a recipe or description for Potatoes Colbert, but did find a Colbert sauce.  There is a recipe for Chateaubriand with clarified Colbert sauce. For that, small potatoes cut in olive shape are placed on each end of the meat. These potatoes are fried in butter. And then the Colbert sauce is poured over all.

The recipe for Colbert sauce is made with white wine, espagnole, lots of butter, and parsley and lemon juice. So what is espagnole, you ask? So did I! It seems to be one of the 5 important sauces used in French cooking. (la-de-dah). It is a brown sauce, and seems to be made similar to gravy using the pan drippings from browned meat. There are videos on how to make it, but they run well over 10 minutes and I am not going to take the time to wait for them to download and then sit and watch for another 10-15 minutes. I don't ever plan to make it so no reason to waste my time. But if that is something that interests you, please take a look.

Times have sure changed, haven't they?

This is the high school study hall I was in all four years of high school. This picture was taken in 1923. My mother used this room! She graduated in 1927 so this is just before she was there. At least she is not in this picture. Her younger brothers and sister also attended this school. It was built in 1903 and used until 1985. I graduated in 1961. It has since been torn down.

The desks are the same, and organized exactly the same, including the blackboards along the wall on the left.

Freshmen always sat in the row closest to the doors (left side here). Sophomores sat in the next row, juniors in the third, and the seniors in the last row on the right. Our little library was in the front of the room, on the right side. That is where I saw my first Good Housekeeping magazine and fell in love with it. I have been a continuous subscriber ever since!

We did not have lockers to keep books and stuff in. The only lockers were in the sports team dressing rooms. (I think, since I did not play sports) All our text books and notebooks, pencils, pens and ink, erasers, glue/paste were kept on the small shelf under the desk top. They didn't hold much. Our coats and jackets hung on hooks all along the wall outside the study hall, the wall behind the blackboards.

Oh, does this bring back memories! It seems odd, but when I was going to school, I never pictured my mother going there so many years ahead of me! After all these years it is finally dawning on me that my mother, aunt and uncles, all tread the same hallways and many stairs that I did many years later.