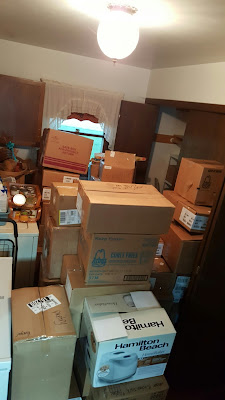 This is the back entry/laundry/closet/pantry room at the former house on moving day. It is jam packed with full boxes and this isn't quite all of them but couldn't get any more in here! 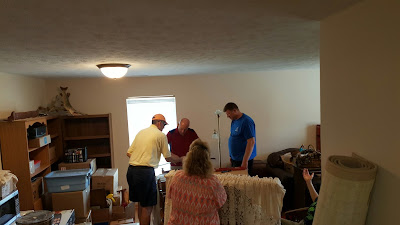 Here the men who moved me are trying to put up the drapes from the former house. These drapes have quite a history with this being the 3rd house they have decorated. They were custom made for my husband's house after we were married. When I moved 10 years ago, the lady who made them was able to make them over to fit the windows in the living room there. And praise the Lord, they fit the windows here in the new house! It was quite comical watching 4 guys trying to figure out how to put up the rods. They took them down at the other house, so you would think they knew how to put them back up, right?
This is a view of the dining area taken from the kitchen. 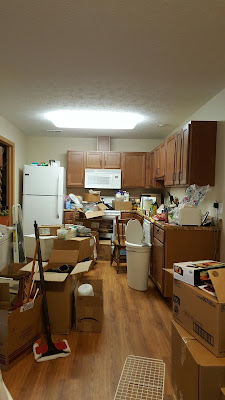 What a disaster! This is the kitchen right after unloading the trailers. 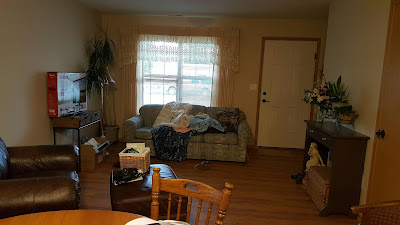 Here is the living room taken from the dining area and looking toward the front door. The furniture did not stay arranged like this for a couple of reasons but it does look quite nice this way. 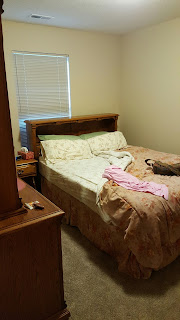 A small glimpse of the bedroom ready for the first night sleeping there. I do want new bedding but will have to make do with the old for the time being. 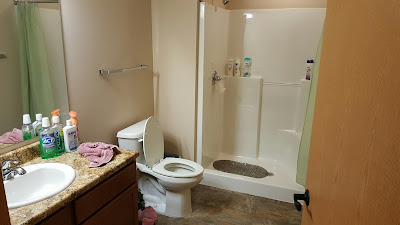 It is hard to see how big this bathroom is in this picture. Things look a little different now as I had management install grab bars on both sides of the shower. My daughter has also installed bars on each side of the toilet to make it easier getting up and down after my surgery. They have been a life saver, even though this is a higher than normal toilet. 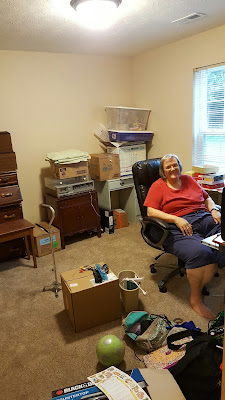 Here I am, totally worn out, in the 2nd bedroom/spare room, sitting in front of the computer desk and trying to get everything hooked up again. There are actually more unpacked boxes in this room right now because we moved some from other rooms that didn't need to be unpacked right away. 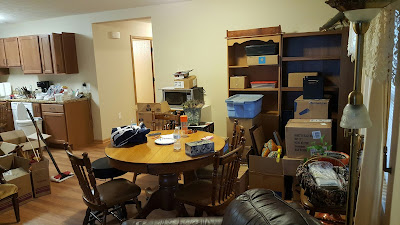 Another view of the dining area and kitchen taken from the living room.
I have since gotten the boxes of books unpacked and put on the book shelves and there are no more full boxes in there. I am anxious to get everything organized so I can take pictures again.

All these pictures were taken by my daughter on moving day.

I had told you before the move that I didn't know what was going to happen to the red swing on the front porch. It turns out my son has a spot for it on his front porch so he took it back to Virginia when he went home after helping me after my surgery. I am happy it is staying with family for now.

MOVED IN AND SURGERY IS OVER

The whirlwind move is over. I am so thankful for all the help from several men and women from the church. A couple of friends came and helped pack the day before moving, along with my daughter and her 11 year old twins. Even though I had already packed a lot of boxes, there was still a lot left, especially the last minute stuff in the kitchen and pantry, plus the garage.

I was able to declutter a lot in the garage since I don't need any garden tools at my new home. And there were a lot of things out there that I had not used in many years so out they went.

Thank goodness moving day was not too hot or humid like it was 10 years ago when I moved into the old place. The guys who moved things were very thankful as well!

I am loving my new home. Everything is new - all appliances included. I even have a dish washer now! I had one many, many years ago and like it but it got old and worn out and my ex didn't seem to want to have it fixed or buy a new one so I did without. When I married my second husband he was my dishwasher as he didn't mind doing them. And there was absolutely no room in his kitchen for a dishwasher anyway. It has been over 30 years since I had a dishwasher that worked. The one here is nice and quiet compared to the older ones too.

And the new washer and dryer is a matched set of new front loading machines. They work really well so far.

After the first night of sleeping in the new house I woke up and thought I was in a hotel room because it all looked so nice. The bedroom is not large and only has room for the queen size bed, long dresser with hutch/mirror top, and chest of drawers. No room for the computer desk like before, but that is a good thing. The computer and sewing desk are in the second bedroom along with several unpacked boxes and a few other odd pieces of furniture that used to be in the living room.

The bathroom is at least 3 times bigger than the old one. Previously I had to walk in and back out because it was so small. I could go on and on. I do have a few pictures of moving day but once I get everything in place I will take pictures again and share with you.

As for the knee surgery, that went very well. People, if you ever need joint replacement surgery, do the spinal if the doctors approve as it is so much easier than general anesthesia. You wake up feeling good, and have an appetite again as soon as they allow you a regular diet.

I had the surgery on a Tuesday afternoon and came home Thursday. I am so thankful that all three of my kids were able to each take a week to help me at home. They also did more unpacking for me, especially getting the kitchen done so that I didn't have to be concerned about boxes sitting around while using the walker.

Once home, that meant going to physical therapy here in town 3 times a week at first, then only twice a week for a couple of weeks. The therapists have been very pleased with my progress and further ahead than most knee replacement patients that they have worked with. So I only have two more session left and should be finished with that. Now I am ready for the second knee replacement, but that won't be for another 5 weeks.

I tried driving this afternoon for the first time and it went well, so I feel confident enough to drive myself to therapy and getting groceries when needed, even though it was my right knee that had the surgery. I was also able to walk to the mail box and back, with the walker, to get my own mail, which I have not been able to do for years. This mailbox is slightly closer than the previous house but I do have to go down a slight incline at the bottom of the driveway and was a bit leary about that, but it went okay, so I think I might be able to take my own garbage cans to the curb and back very soon. However, they are large and bit hard to maneuver while using a walker, so will see if it will work this week. If not, my friend will continue to stop by and do it for me for a while longer.

Besides not sleeping well at night, so take naps during the day and being just plain tired from the moving, unpacking and surgery all so close together, I have been watching most of the Olympics so I have not spent much time on the computer. As much as I enjoy the Olympics, I am happy that they will be over tomorrow so things can get back to regular schedule again.

This brings you up to date on everything happening here. I hope to get pictures taken soon and share them with you.