Did you get the story figured out?

Here is the story again, with the answers.

On a certain February day, a pair of SPOONERS started on their journey through life. He had given her enough compliments to TURNER head. He promised never to BEATER or WHIPPER and to keep her CUP of happiness full. Their home at the FORK of the road had a PANtry and all. As they approached she tried to open the door, but could not, and he said, "Dear, I CAN OPENER."

Their first dinner was not a grand success as she forgot to SIFTER flour into the biscuits and STRAINER tea. All this made her as hot as an OVEN. He wanted to SQUEEZER but was afraid to do so. He told her he was TEAKETTLEd (tickled) to death over the dinner but was glad he had not jumped from the FRYING PAN into the fire.

What's that? Did I hear a bunch of groans?
Tell me how many you guessed right in the comments.

If you do want to use this for a shower, it might be a good idea to list the kitchen items in random order to give them some ideas for answers.
Posted by Lorita at 12:30 AM 2 comments:

WHAT HAPPENS IN JUNE?

Spring is finally here, and it won't be long and it will be June. We all know what that means, don't we? Weddings! June has always been known as the wedding month, though I don't know why. It seems there are more weddings in September now.

I have a granddaughter getting married the end of August, so no a June bride, but there will some bridal showers coming up before long.

In case you are giving a bridal shower for someone, you might be interested in this little game that was played at a shower I attended decades ago. It is a little story about the bride and groom, but with some blank spaces. The ladies are to fill in those blanks with items from the kitchen to complete the story. I will admit that the younger generation might not know what some of these things are, but the older ladies should be able to get most of them.

I need a kick start to get going with blogging again. There are just too many ways to spend my time. I recently went through my pictures folder and deleted many of them. I ran across these, remembering I was going to blog about them. So here it is.

Several years ago, 1992 in fact, that I did the following two counted cross stitch projects. Reminder to self - always initial and date your projects. You can see how much this helps since I would have never remembered how long ago it was. 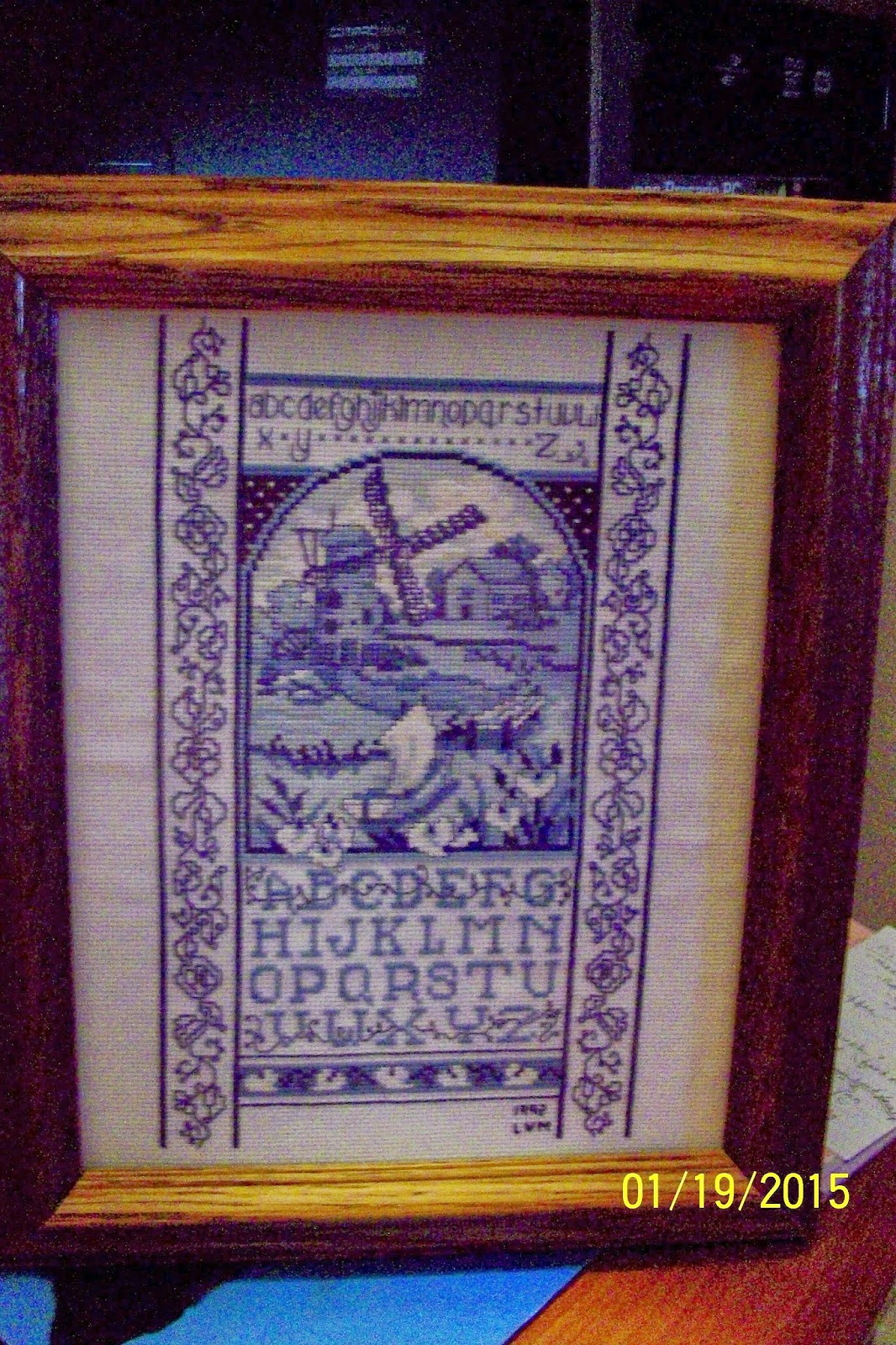 Since my husband was Dutch, and I live in a predominately Dutch community, I knew I had to make these two pictures. 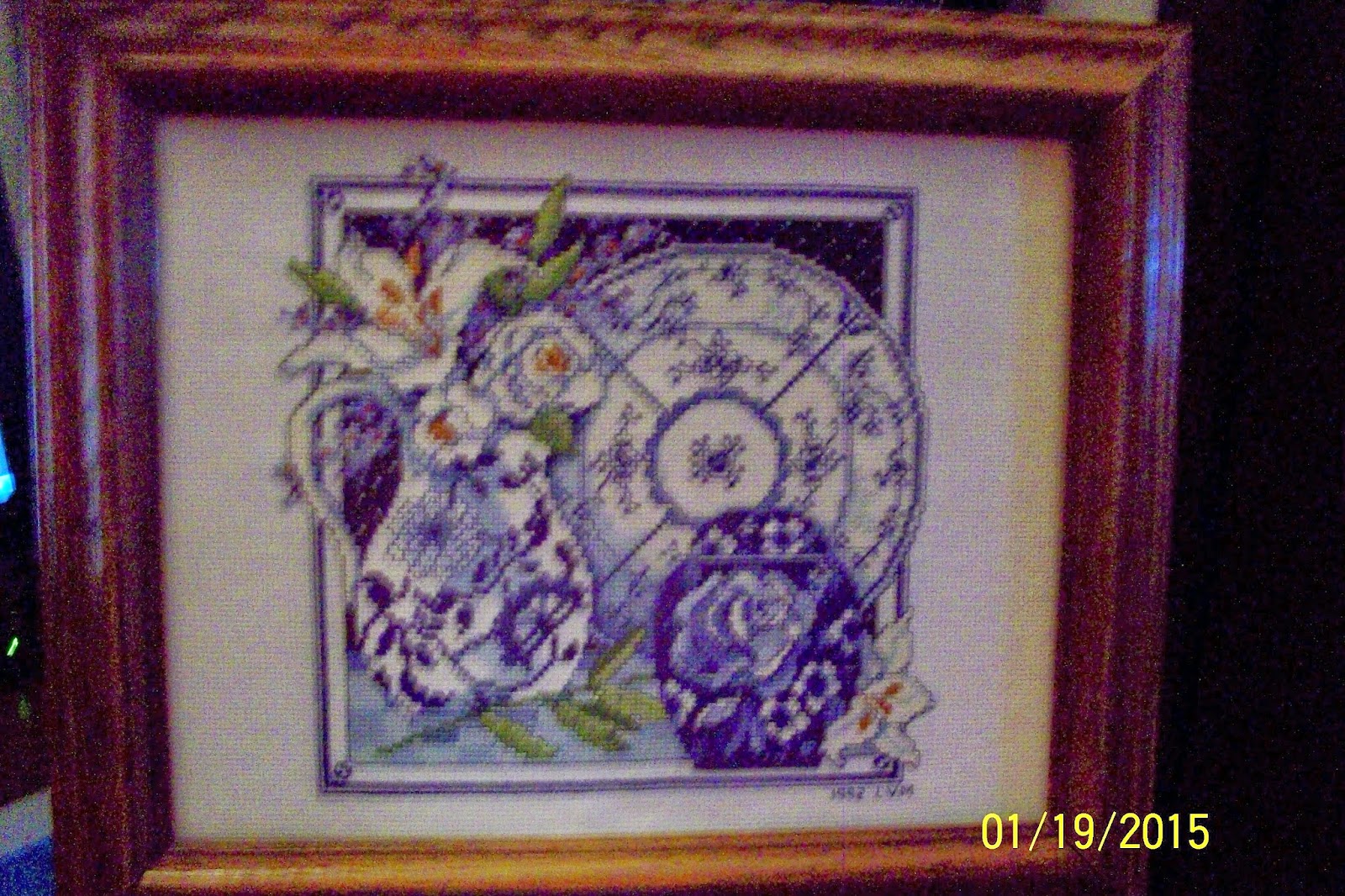 Blue Delft is also popular with the Dutch. I really like this one.

These two pictures always hung in our kitchen. But in this little house, I just can't find a place for them. I asked my kids if they were interested in having them, so they will go to my son later.
Posted by Lorita at 12:30 AM 2 comments:

I have a very crafty friend who enjoys making her own greeting cards. I don't know where she comes up with all the cute ideas. I know I could never come up with them.

Here is a card she made just for me after my cat, Felix, died. I am sorry the pictures aren't that great, but you get the idea. 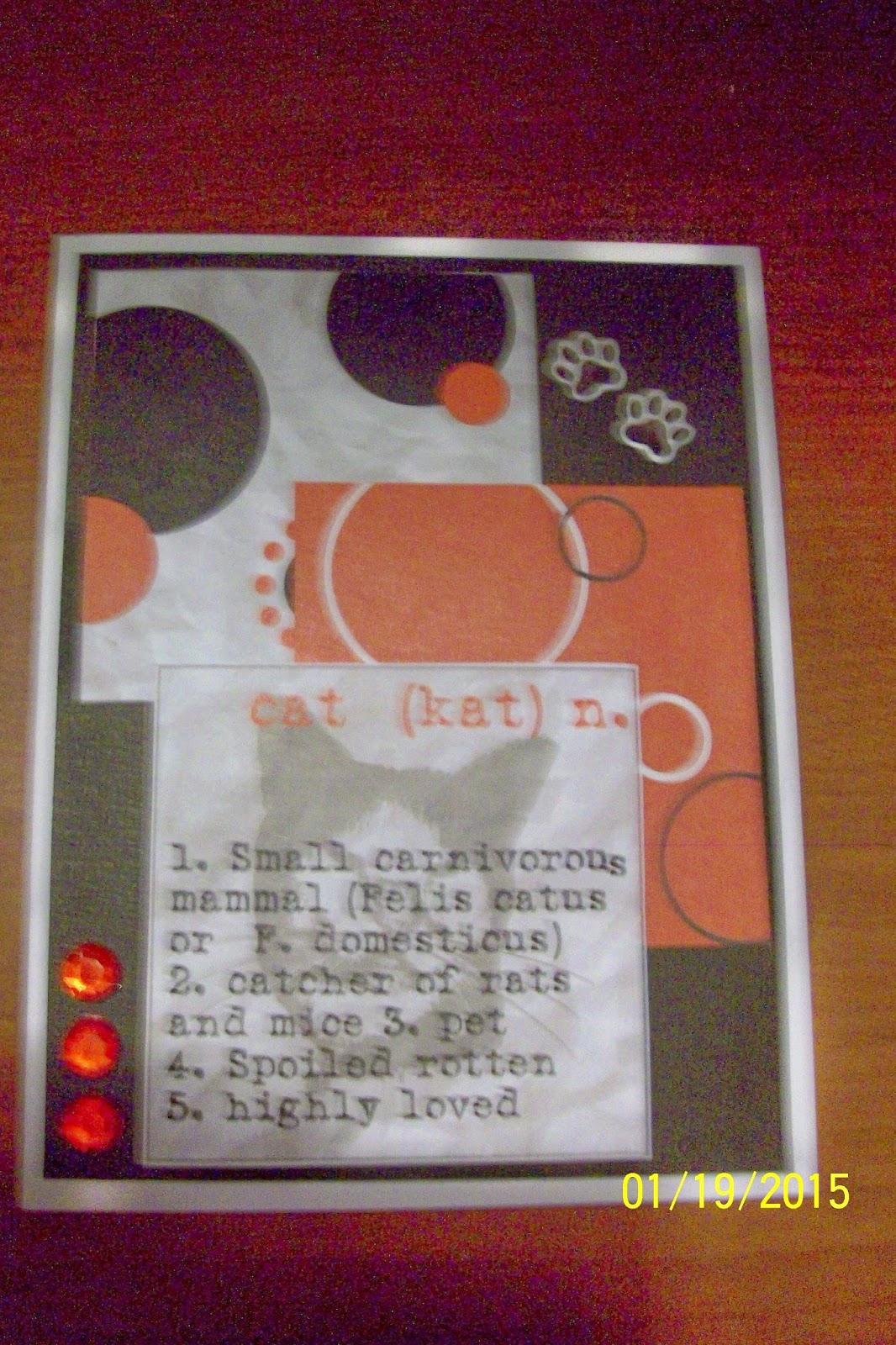 This is the front of the card. Those three red dots are actually 'gems' that are glued on. 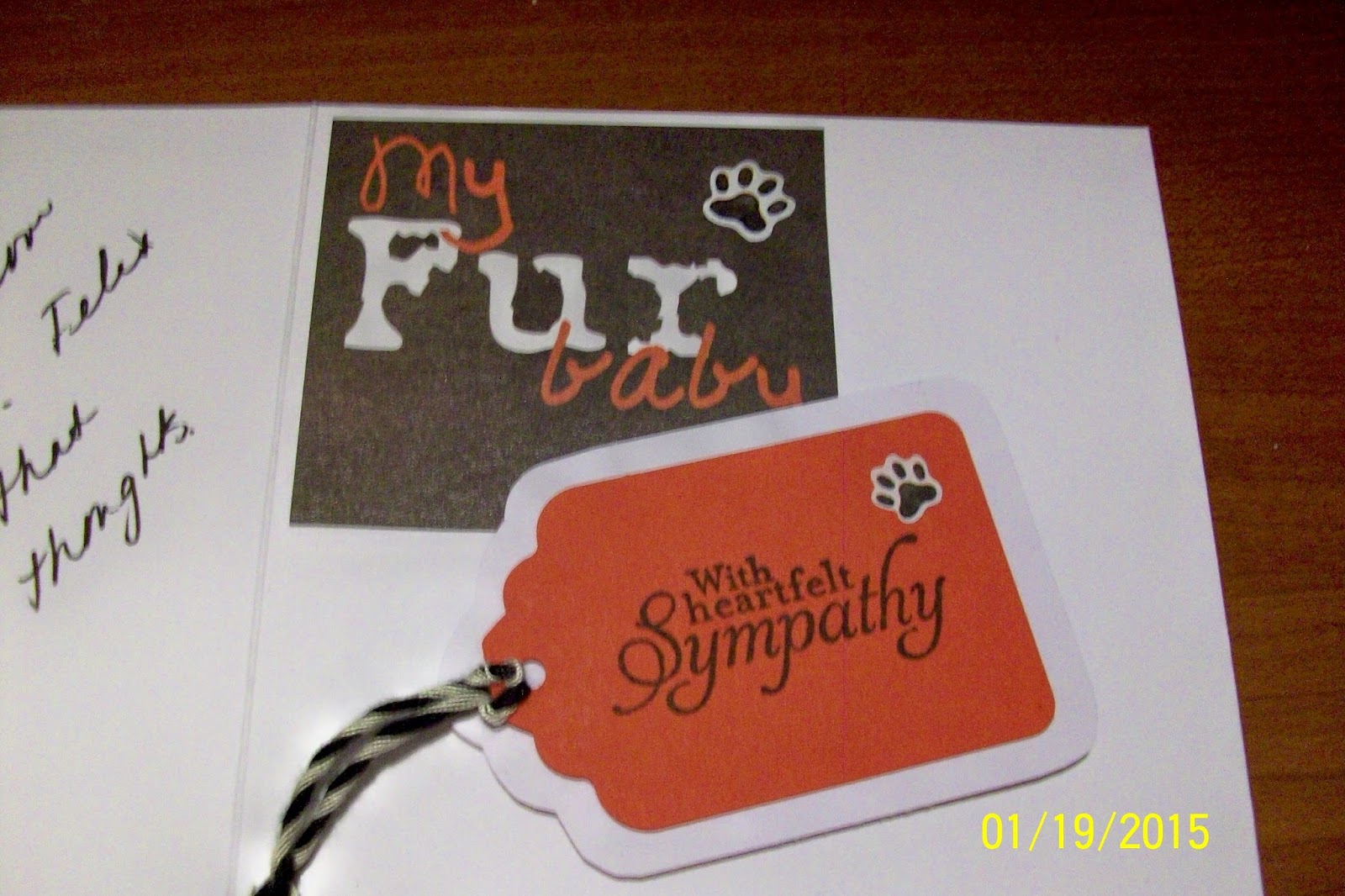 Inside the card is the cute tag that is also glued on. This card WILL go into my permanent collection for several reasons, among them is the artistry, because a friend made it especially for me, and in remembrance of my fur baby companion.
Posted by Lorita at 12:30 AM No comments:

HOW CAN I BE SO BUSY?

This is how I feel this week! I had not intended to take so long between posting again, and I have no excuse other than being busy with several other things that took priority with my time and energy.

We have been having some dark, dreary and damp days and that does not help with my energy either. I need sunshine! But we need rain, too.

I need to be working on studying two different Bible studies, and am not getting those all done. I have been working with a cousin as we try to get things organized for our family reunion coming up this summer. And I set up a Facebook group for the reunion as well. It doesn't seem like it should be much work but it all does eat up a lot of time. Since I do not sleep well at night, I need an afternoon nap almost every day. You may say that if I skip the nap I would sleep better at night. Nope. It doesn't work that way for me, so I need to catch sleep when I need it. All I can say is that it is a good thing I live alone!

I am still on post surgery restrictions so am limited to lifting no more than 10 pounds, and not do anything strenuous. Other than that and my knees, I am feeling quite well. And since I need to take it easy, it should be a good time to do some blogging, but I also should be working on getting the genealogy binder put together so it is ready for the family reunion. I know the days will go faster than I would like as far as getting that done, so I am starting to get a little tense. Not panicking yet, but it won't take long. I feel like I am on a treadmill and it keeps going faster and faster, and I can't keep up.

I also have two letters I need to write to some high school classmates. I had intended to write one of them shortly after Christmas when I got a nice letter from her, and now we are 10 days into April already. My unwritten to-do list keeps getting longer and longer.

Right now my tummy says it is past time for breakfast, and I haven't had my first cup of coffee yet. So I am off to take care of the physical needs for now, and hope to write some more posts today, but I also must work on a Bible study today, so we will see how far I get.
Posted by Lorita at 8:25 AM No comments:

When my daughters were here, they were going through some of my old photo albums. I showed them a recently found picture of my mom when she was a teenager, and I said I thought the oldest daughter looked a little like her and the youngest daughter couldn't see it. We always say the oldest looks like their dad's sister, and she does, including some mannerisms.

Later the younest daughter sent these pictures as you see them, side by side. The girl on the left is my oldest daughter and on right is my mother. My youngest was totally shocked! I didn't realize it was this close either. What do you think? 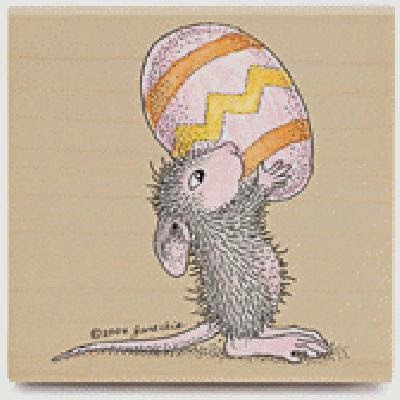 It is a little hard to believe that it has been 10 days since surgery. One daughter and the twins left for home Saturday afternoon, and the other daughter left on the Tuesday after surgery.

The daughter that stayed shampooed some of my carpets as well as my van, and giving the van a good cleaning inside. Now the house and van smell so much fresher. Those were both much needed jobs to be done and I was not able to do either because of my knees. And now I can't do too much and can only carry 10 lbs, which the doctor said was a gallon of milk. I really do appreciate all the help from the girls while they were here.

I have received several lovely cards, and some of the church members have brought meals over. I appreciated the food but the visiting meant even more. Today is Sunday as I write, and after church a couple from church dropped off the bulletin and the things in my church mailbox, plus something large in a plastic grocery bag. It turned out be a gift basket from a church committee called the ARC Angels, and this is what they do. Anyone who has been ill and/or in hospital will usually receive one made up especially for them, and the people who are doing this is kept secret. As I type this I realize I need to get a picture of it. If it isn't in this post it will be in the next one. 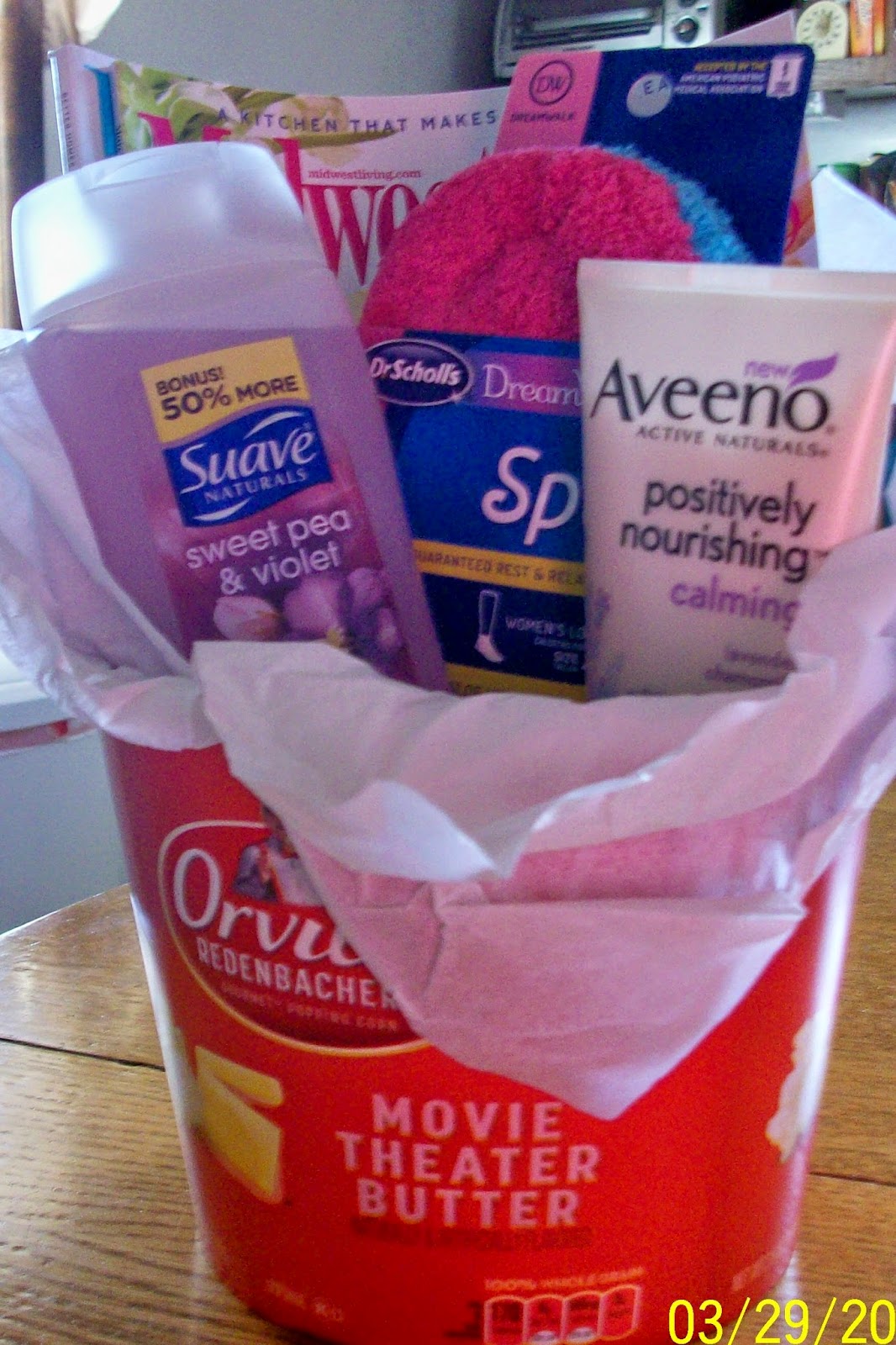 This is the gift basket from my church. There is a current issue of Better Homes and Gardens, and one of Midwest Living. These are two magazines I really enjoy but no longer subscribe. Also 2 pair of fuzzy, soft slipper socks, Aveeno body lotion, Suave Sweet Pea & Violet body wash, and a Skinny Cow candy bar. 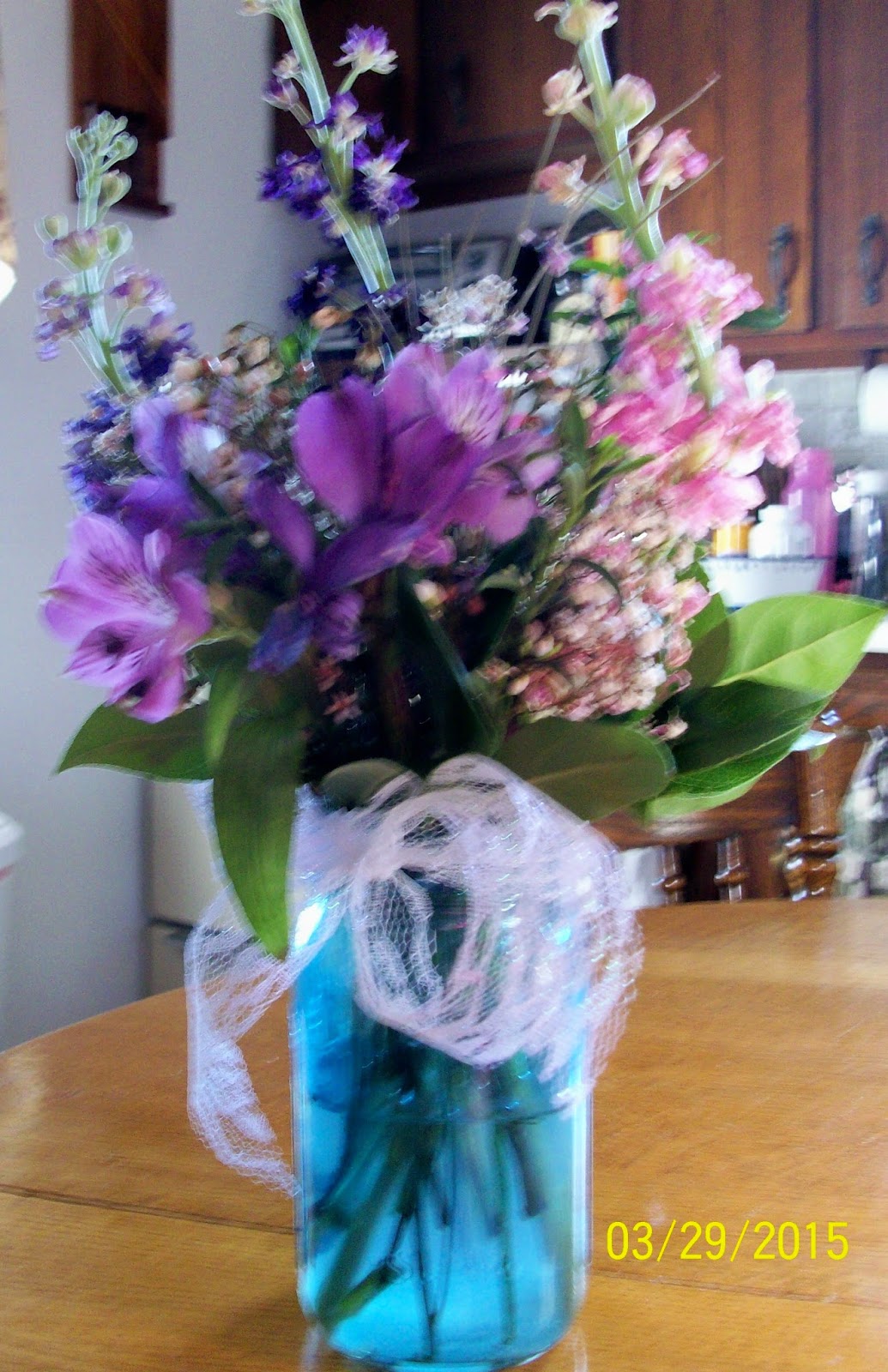 This is the bouquet my daughters gave me at the hospital. I should have taken this earlier when it was still fresh. This is after 10 days. The vase is a blue canning jar. That was chosen because I have a few antique green jars.
Posted by Lorita at 12:30 AM No comments: