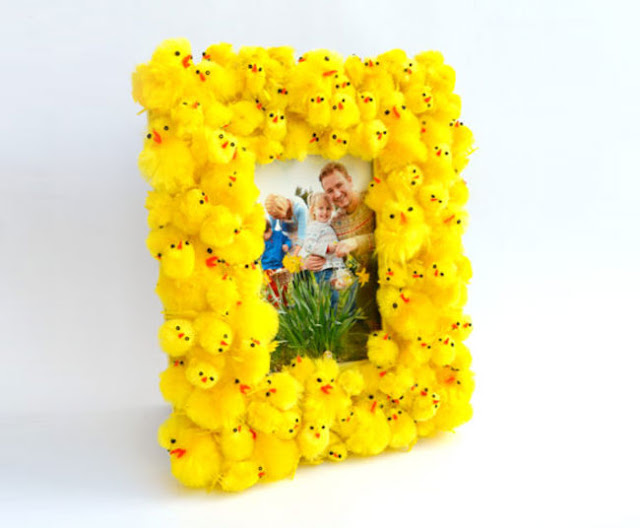 Would you make this? This is a DIY project that showed up in my inbox today. Just glue on all these little chicks that look like Peeps on a frame to display a spring picture for Easter.

It is cute in a way, but I am not sure I like it enough to make one. I guess it would be a good project for kids. I don't know where they got those little chicks, maybe Hobby Lobby, or a dollar store. 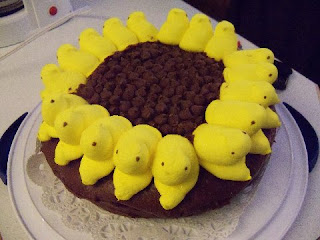 I think I would be more apt to make this with real Peeps. I like Peeps, but I know many do not. How about you? Anyway, I think this cake is cute for Easter, and if you don't like Peeps, they are easy to remove from your piece of cake. Instead of chocolate frosting, I think a pretty spring pastel frosting would look very nice. Also, Peeps come in different colors. The bunny Peeps would be cute around the sides of the cake for a different look.

Either project is quick and easy to make now with Easter just a few days away.

Happy Easter to you all!
Posted by Lorita at 9:39 AM 4 comments:

Yes, that old man insists on hanging around awhile longer. Most of South Dakota, Minnesota, Iowa and Nebraska are having a slow moving blizzard.

So far the snow has missed us and have been getting a lot of rain. But then, during the night I heard the rain turn to sleet as the strong winds slammed it against the house. So this morning things are icy, and then later today and tonight we are supposed to get snow; not as much as in the blizzard areas, but at least 2" or more.

While I was making a \middle of the night bathroom run, sitting on the throne, the power went out! There is no window in the bathroom, so it was totally dark. Now, I keep a flashlight next to the bed and one in the kitchen for such emergencies, but none in the bathroom! For some reason the night light in the bathroom and the one in the hall next to the bathroom still had a little dim light so that I could make out the door to the bedroom. I just got in the bedroom when those dim lights went out as well. Amazing that there was enough light outside that I could see the window to get to the bed. Actually, I have made that trip so many times that I am sure I would have made it in total darkness using auto pilot.

I had no idea what time the power went off until I got up this morning and checked the electric clock in the living room. It was 2:30 am. The power came back on at 4:55 am. It is a good thing that the temperature was not as cold as it would be in the middle of winter, so that the house did not get uncomfortably cold without heat for that long.

When I checked my emails this morning, I had several messages from the county sheriff telling about several power lines that were across the roads in the county and warning to avoid those areas, so the ice and strong winds were evident.

I had two medical appointments for today. One was at 10:00 am at the dentist for my 6-month checkup and cleaning. I rescheduled that one yesterday and so glad I did as the dentist is in the next town ten miles away and it is still icy. I have an appointment at the local clinic at 2:00 pm and am going to call and reschedule that for next week. I am taking no chances when weather is like this, even if it is only 6 blocks away. I am not going to walk with the walker on surfaces that may be icy. That appointment is just for the lab and not to see a doctor, so that can wait until Monday.

One good thing about getting ice/snow/blizzard in April is that it won't last long. The weekend is supposed to be in the mid 40's and 50's and melt it all. Meanwhile we wait for the boing boing of spring to bounce back very soon.

Uh-oh, I just saw the lights flicker. I better get that call to the clinic made now in case the power goes out again and I don't have a working phone.
Posted by Lorita at 10:12 AM 2 comments:


Spring has sprung, finally! At least for now. There is a slight chance of a little snow tonight but highs in the mid to upper 40's for tomorrow so it won't last long. Hopefully we won't get any snowstorms this month, but there are no guarantees in this part of the country.

I have been keeping busy crocheting again. I had a special order to make an afghan using the jumbo bulky yarn. I had never worked with that before so it was a little bit of trial and error to begin with. The hook is huge, about the thickness of a broom handle. I finally got the hang of it, even though the stitches are still not as uniform as I would like. I usually hold the hook like a pencil when I crochet, but with the huge hook I had to palm it. I know many use hooks that way but that is not the way I learned it. 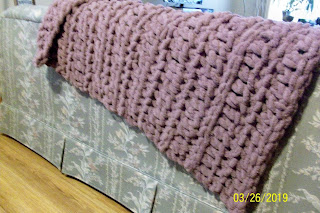 This yarn is like chenille so it is fuzzy and warm. 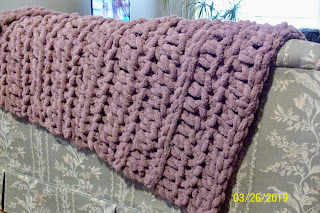 Now I am finished with that project I am crocheting winter hats with the yarn I was given at my 75th birthday party.

Some of the yarn is shown in the bushel basket above, but when we got back home there was a whole lot more. It will keep me busy for a long time.

I am also hooked on working jig saw puzzles on the computer as I watch tv. That is very addictive! It is also a time stealer, so I don't get other things done. I should be "good" and not do those things until I have my other work done, but what is the fun in that?!

'They say' that when you get older you go into your second childhood. I guess I am there. I only want to play. ☺
Posted by Lorita at 3:17 PM 2 comments: