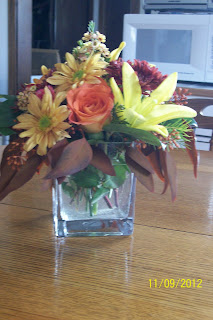 Aren't these pretty flowers?
They are a birthday surprise from my youngest daughter and her family. They look pretty and different from each angle as you will see throughout this post. 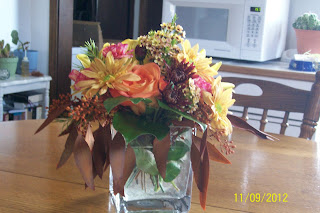 The day started quite early with the first surprise. I was up at 5:00 am for our weekly Bible study which starts at 5:45. The gals were a few minutes late, which happens once in awhile, but usually are on time. They come in, say good morning, and "Happy Birthday", then tell me we aren't having Bible study today. Instead, "We are taking you out for breakfast, get your shoes on." (I am always running around without shoes. At least I had my socks on.) 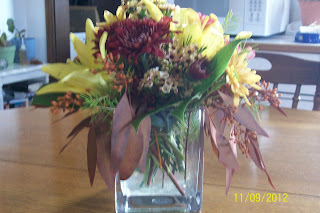 Since there is no place in town that is open for breakfast at that hour, we drove to the next town 10 miles away and went to a really nice coffee shop. They had 3 kinds of muffins in the case and just put freshly made, huge and still warm, cappuccino scones in as well. Plus they serve one kind of breakfast sandwich either on English muffin or bagel. We decided to get one scone, one apple streusel muffin and one cranberry/pecan muffin and share some of each, and we each ordered the breakfast sandwich. Everything was so delicious. The sandwich was a round egg exactly the size of the English muffin, but not scrambled, a sausage patty, white cheese - maybe Swiss? - and some kind of dressing with bits of red in it that made it very interesting. Whatever it was it was very good. We just had a great time talking. Then they gave me a gift and when I opened the box there was a $25 Amazon gift card! These gals are just the best, and keep in mind that one is just a few years older than my oldest daughter, and the other is younger than my youngest daughter. They are so special! They are both public school teachers so they had to go to school and we made it back in time, in spite of the dense fog we had that morning (Friday). 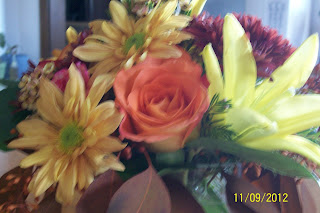 Once I got home, I unpacked the birthday present I bought for myself - a new, small freezer. It was delivered late in the day on Thursday, and they didn't take it out of the box for me. I guess they are just a delivery service for Sears, plus they still had 4 deliveries to make that night so were in a hurry. It turned to be a simple thing to unpack it which made me very happy. I have not plugged it in yet as I need to get it leveled first and I need to find the level! I am almost certain it is in the garage, so that is where I am going as soon as I finish this. The freezer fits very nicely in the area I cleared out for it. And the shelf unit I had there fits nicely in the laundry closet now that the treadmill is sold and no longer standing in front of it. The money I got from selling treadmill, the money from selling the dehumidifier last spring, and money I received already for making the afghan I am currently working on, I have the freezer paid for plus a little toward the shipping charges. I guess I could add the $25 from the gift card, too. 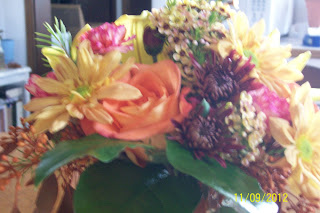 Then the flowers were delivered shortly after 10:30, and at 11 other friends picked me up and we went to that same town and had lunch at a good Mexican restaurant. More fun and more food! I couldn't eat it all so brought enough home for another meal, probably lunch today. They gave me three $10 gas cards for a local station!
From there we stopped at Walmart and I found some Sterlite baskets that fit in the freezer - with handles. They stack, two on two. So I can put meat in one, veggies in another, fruit in one, etc. That way I don't have to fall into the freezer to get what is on the bottom since it is a chest freezer. It isn't really that deep so I don't think it would be a problem anyway, but the baskets will keep things sorted for me, and I can see when I get low on something. This freezer is only 7.2 cu ft so it is not very big but should be plenty of room for me.
I had the rest of the afternoon and evening to relax, work on cross stitching and the afghan, play on the computer a bit, get the mail, etc. A long time friend later called for my birthday and we had a good chat for about an hour and had a few good laughs too, so that was another day brightener. My daughter had also called in the morning to see if the flowers she sent were nice. I think so, don't you?
My other daughter had called on Wednesday evening to wish me an early happy birthday, but I have yet to hear from my son. He usually calls on Sundays so I expect that call tomorrow.
All in all, it was a lovely birthday. It took me 70 years to get to this point.
I have some other things to write about and have loaded the pictures, but haven't been able to get them written this week since it was so busy and wore me out. Maybe I can to them later today or tomorrow. . . or not, but they will get done.