(I just realized I never published this post which I meant to do a couple weeks ago, so here it is now.)

I am borrowing one of the titles for the theme of the day used in my favorite internet group. I hope that is okay. If not, one of you please let me know. And I enjoy Terri's blog with the various topics for each dayj, which is sort of like reading a newspaper or magazine with the same features that are in every issue. Since I like that format I hope to do something similar, though my topics will be different. And they may even change as the mood hits me.

For today, my mind is on my needlework projects of the past. It has to be the past projects as I am not working on any needlework at this time, not even the knit caps I am almost always working on and which are donated to Goodwill Industries for their annual Christmas Shoe Parties. Every year I also make an afghan or two to donate to my church's annual fund-raiser auction with the proceeds going to help pay off our debt of building a new handicap accessible fellowship hall. For the 2012 auction that took place February 1, I ended up making three. One was a knit baby blanket, one a variegated blue/lavendar crocheted afghan, and then I had a special order by a member that wanted an off white afghan to use when she was sitting on her new window seat, either reading or watching the birds and squirrels outside. She intended to bid on that until it was hers, no matter how much she had to pay for it. Below are the pictures of those three. They are not such good pictures because I had forgotten to take the pictures before I took them to church, so had to run down there with the camera later to get them taken before the auction started. 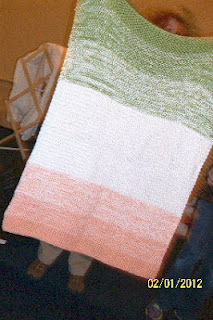 Above is the knit baby blanket. This is a quick and easy pattern using just 3 colors. To get the shaded stripes 3 strands of yarn are used throughout, then doing a number of rows with all peach, changing to 2 peach and one white, to 1 peach and 2 white, then all 3 white, then 2 white and 1 green, etc. It is done on large needles and simple knitting of each row. Very easy and quick. If memory serves correctly, I think the high bid was $45. Not an exceptional amount for this type of auction, but not a bad price either. I am sure whoever got it had to love it as I used a very soft yarn, and knit is always softer than crocheted in my opinion. I have to apologize to Julie who is holding the blanket since all you can see of her are her feet and the top of her head from the eyes up. LOL 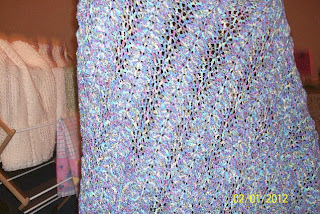 The details of the blue/lavendar afghan can be seen a little in this picture. This is regular Red Heart yarn and crocheted. I think it brought around $60. I have seen them go much higher, but another woman donated 10-12 afghans this year, all the same pattern, just different color combinations. That was too much of a good thing for one year, and so none sold as well as they should. 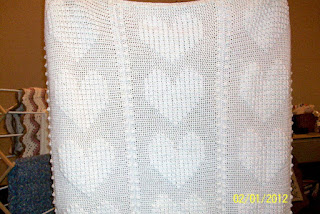 This off-white heart crocheted afghan is the special order, though she only specified the color and not the pattern. It was done in 3 strips and then sewn together. It was fun to make and I love the way it turned out. This was the big money maker. The lady that got it paid around $275. But the auctioneer always picks one handmade item each year to have the bidders donate $25 per 'bid' and there were a lot of those bids. It ended up bringing in $1,000!! It totally floored me and thrilled me! It is the only one they announced who made it. Most years at least one of my afghans brings in some good money but never anything like that! And each year after the auction I wonder what pattern I can use to try to top the one from the year before. That is the hardest part! A few weeks later on a Sunday morning, the lady that bought it showed me a picture of the afghan on her window seat, and it fit in very well. She is thrilled with it, and says it is nice and warm while she is curled up there to read. I am pleased and very thankful that she is happy with it and that it raised that money for the church. Anyone have some ideas on what to do for next year?

Here is a needlework project that is my pride and joy.﻿ 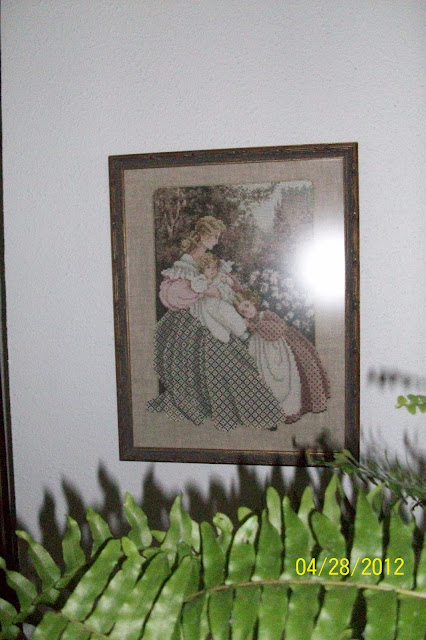 This is a counted cross-stitch project I did several years ago, and probably my best work of this type. So I thought it needed to be professionally framed. I couldn't get a good picture without the flash glare so try to ignore it. My lovely Boston fern is in the foreground - the one I almost killed off a couple winters ago. It is flourishing now, thank goodness. Last summer I hung it outside where it really took off, and I managed to keep it going this winter by putting it in a different spot in the house, and taking it to the bathtub and giving it a good shower and soaking quite often. 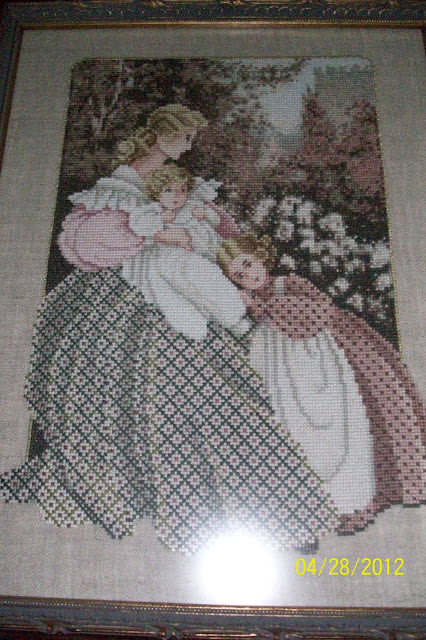 Here is one close-up that shows the details better, and the one below is just a little closer but the flash glare covers up a bit more of the stitching. I tried taking without the flash but the picture came out fuzzy, even though the light was good. 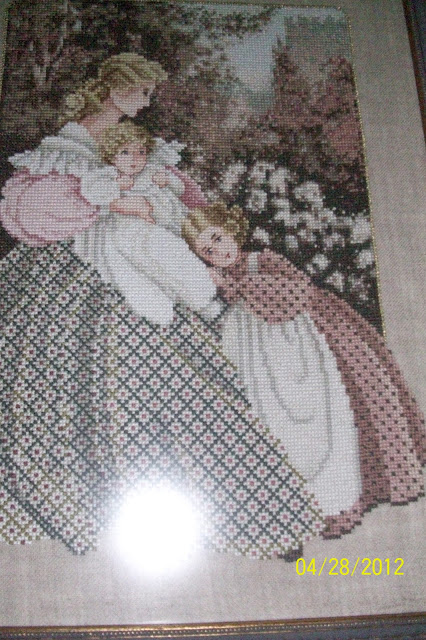 I have given away many of my projects as gifts but this one I am keeping! I hope my kids will keep this as a family heirloom. I should take pictures of the other ones I have and post those later.


These are some older projects that I did several years ago. This was back in the day when we used the wooden embroidery hoops to frame many things, then glue lace around the edges. It is really hard to tell in the pictures but I had painted the hoops country blue to match the room they were in. These three hung as a group - large in the middle, with smaller ones on each side - above the blue desk that I used for my sewing machine and all that went with it. In this house I am not able to do that, so I have the large one above the chest in the bedroom and the small ones on an adjacent wall. 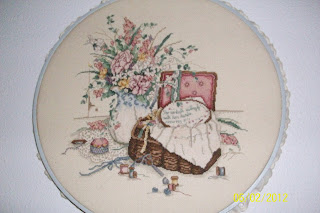 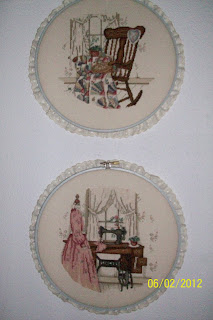 These are about 8" I think. I don't feel like getting up to measure so that is as close as I am going to get. LOL This is the type of counted cross stitch that I enjoy doing the most. I love the intricate work. I really should dig through my patterns and find a project to work on now.
﻿ 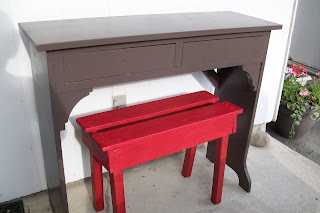 When I painted that porch swing red I also painted these two items. This is on my back patio, but you only get to see a tiny bit of it. The back door is just outside the picture to the left. The summer I did this turned out to be very hot and very humid/muggy, and one could work up a sweat just by sitting outside. So it was not fun painting then. I tried to only work on them early in the mornings before it got too hot. Now I am thinking about painting multi-tiered plant stand a light, but bright green to use outside. That doesn't quite fit into the patriotic theme, tho, does it. I am hoping it will be a nice accent anyway. I also have an old cream can that was painted black back in the 60's when it was popular. It really needs to be painted again as it is looking pretty tough. I was thinking navy blue. What do you think? The rest of the blue on the house - shutters and door trim - is a lighter country blue, which is now very faded. The whole house and shutters need painting so badly, but that doesn't seem to be high on the landlord's priority list either. It actually needs new siding as some of it is getting rotten and warped. I feel like I am living in a slum area by the looks of the outside of the house, but the area actually is very nice and very neat. It is just my house that looks so shabby. I so hope people don't think I own this house! But if I did, it would not look this bad.

The small bench still sits there but a little closer to the door. It is really handy to set shopping bags on while unlocking the door, but during the summer I have 3 cactus plants on it. It was formerly yellow with white legs. It has a long history as it was on the family farm where I grew up for as long as I can remember, so it must be at least 70 years old and probably older. I would like to know if my dad made it. It is very simply made with 1x4's and 2x2 legs, but quite sturdy for all those years.

The brown table was in my husband's basement for years. It was black and at one time someone had put black and white marble contact paper on the top and the fronts of the small drawers. It is hard to see those drawers in the picture as the glass knobs are off for painting, and the drawers are flush with the spaces they fit into. I washed up the glass knobs and they practically look new. The screws that old them on were very rusty so I did buy new ones.

At first I put this behind the couch which sits midway in the room and divides the room, so is not against the wall. Later I decided the blue sewing desk would look better behind the blue couch, and I could sort of hide any sewing project there. And so moved the brown table to the kitchen where the desk had been. It is so much handier there as I keep mailing supplies like envelopes, return address labels, postage stamps in one drawer. The other seems to have collected all the other things one doesn't know where to put them. I originally thought it would be for decks of cards, spare batteries, some pens and notepads, paper clips, etc. But a whole bunch of other things have been shoved in there as well and so now is stuffed beyond full most of the time.

I should apologize for making the landlord sound so bad. They are really very nice people, and live right next door. But it is a puzzle to me why things are being let go for so long.