WHO IS SADIE HAWKINS?

I didn't realize we had a Sadie Hawkins Day this year until the middle of February. A big deal was always made of this day in school when I was a kid. Do young people even know what that is? That is what we called February 29 since it only comes around every four years. In the three years in between February only has 28 days. No matter what year it is, February is always the shortest month of the year, and most of us living in cold and snowy winter country always look forward to the last day of February. That means temperatures are warming up and often feels like the beginning of spring.

Back to Sadie Hawkins. That is a "holiday" when the tables are turned and women and girls get to ask the guys out, and even propose marriage, especially if the guy is dragging his feet. In today's society and women's lib, women are more apt to do the asking anyway. Some places would have Sadie Hawkins dances and only the girls could ask a boy for a date. Girls looked forward to that day unless they were shy like me. The shy girls feared asking a boy so often stayed home.

I couldn't remember why this day was called that so I had to google it. And I found several sites that talked about Sadie Hawkins Day is November 13, 2016, or some say it is November 1, 2016. WHAT?

It all started with Al Capp and his comic strip Li'l Abner, and talk of Sadie Hawkins Day was first published in November 1937. The comic strip ended in 1978 so there must be a whole generation  who have never even heard of Li'l Abner. Li'l Abner lived in Dogpatch, USA, a hillbilly community.  Sadie Hawkins was 'the homeliest gal in the hills' and nobody wanted to date her, so the only way she could get a date was to have one day a year when gals got to do the asking.

Okay, I have finished teaching for today. I even learned something!
Posted by Lorita at 12:30 AM No comments:

Now backing up to end of August and my granddaughter's wedding. It all went well, was very pretty and fun.

I went down to Omaha the day before so I could get situated in a hotel room with my oldest daughter. Then we went to the rehearsal and supper. I am so thankful my other daughter (mother of the bride) was able to get a wheelchair for me. My oldest daughter had the 'privilege' of being my driver, both to and from venues as well as pushing the wheelchair wherever I needed to be.  That wheelchair was a lifesaver for me because I would not have made it with all the walking and standing around. The morning after the wedding we went to the bridal couple's new home to watch them opening their gifts with some of the rest of the family and their close friends.

I so enjoyed getting to know my new 'grandson-in-law' (?) much better over the weekend. Even though they had dated for many years, and I saw him a few times, he was pretty quiet and I really didn't know his true personality. My granddaughter found a great guy!

Here are a few pictures of the big event. 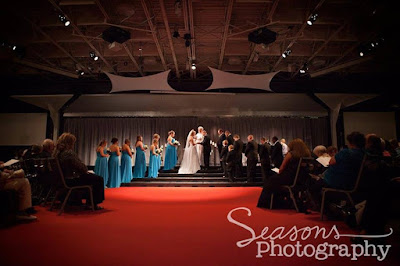 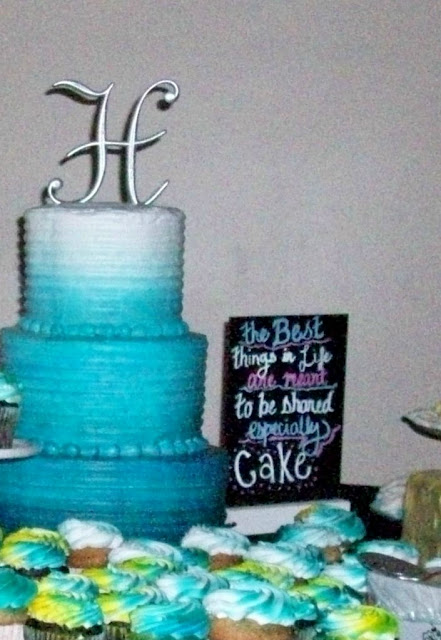 Can you read the sign next to the cake?
"The best things in life are meant to be shared, especially cake." 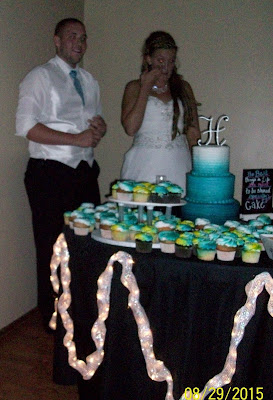 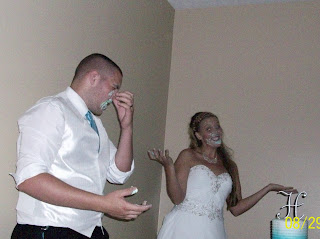 What is a wedding without cake face smashing?!
They were nice about it, not like some that you see on Facebook where they can get a bit nasty. 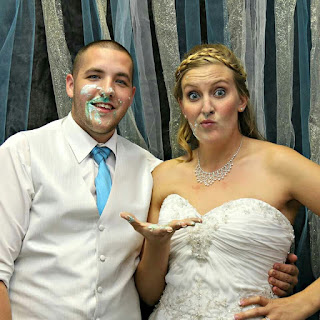 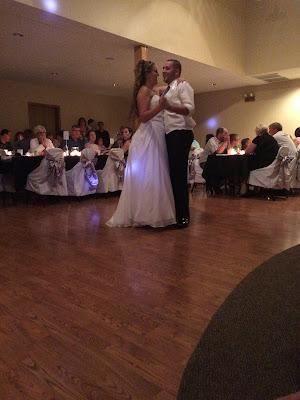 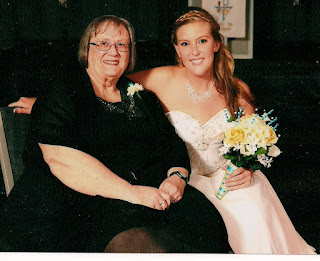 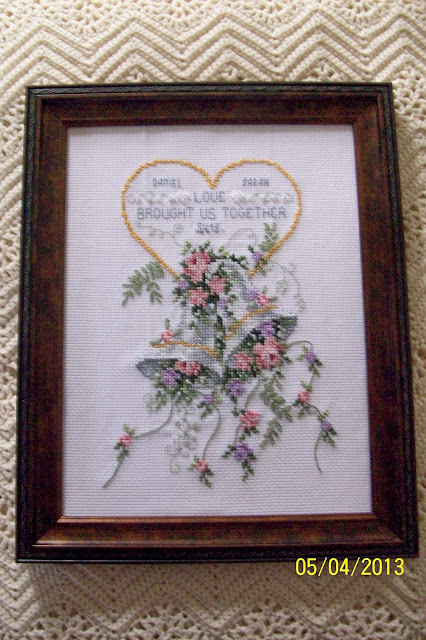 I guess I forgot to take a picture of the cross stitch I did as part of their gift. This one is the same design I did for someone else. Granddaughter teared up when she opened the box.

While it is true that we have not had as much snow as the eastern part of the country did last year, we have had a lot more in my area this year than in many years past. We have had at least 2 big snowstorms receiving a foot or more of snow each. They have also been called blizzards because we had some very strong winds a couple of times. They were strong enough to blow some semi trucks off the road.

One of the prettiest snowfall we received was on November 20. We did not have wind with this storm which is very rare here on the prairie. I cannot remember ever seeing the views like in the pictures below, below, taken from my kitchen window and back door, at least since I moved to this house 10 years ago. 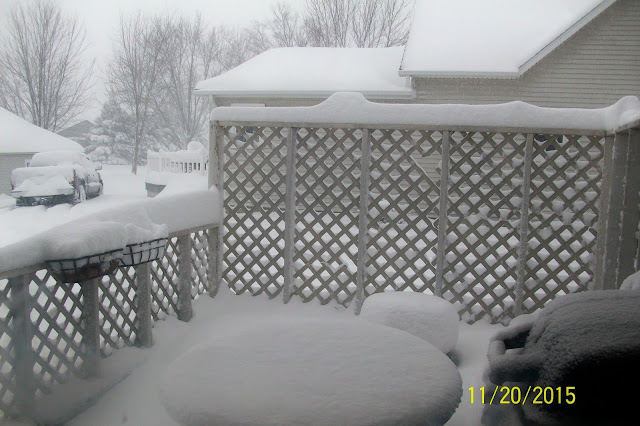 I thought the higher bumps on the high fence rail are interesting, and wonder why it formed that way. The rail is flat. The snow on the lower rail gives a better picture of how much snow we got, as well as the high, round top of the tub behind the table. 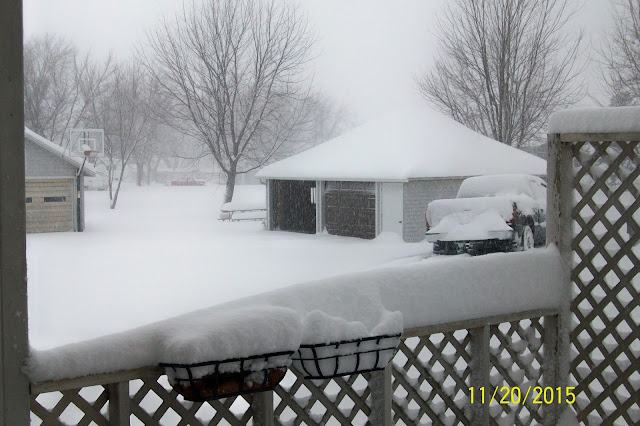 I love the 'loaf of bread' in the wire planter. This was a 'wet' snow as you can see how it sticks to the pickup. See the piles of snow on top of the bumper? 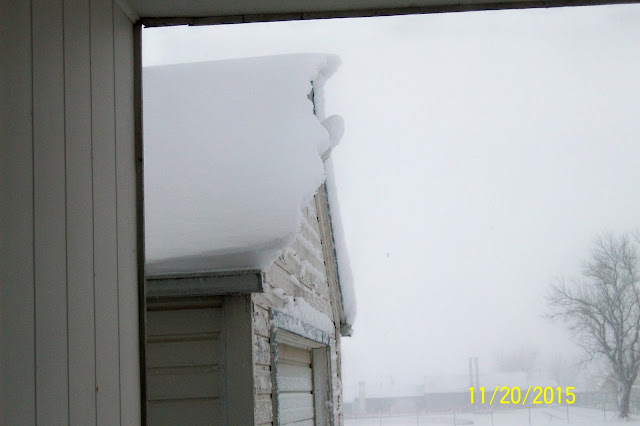 I took this photo because of the amazing snow sculpture that extends from the edge of the garage roof. 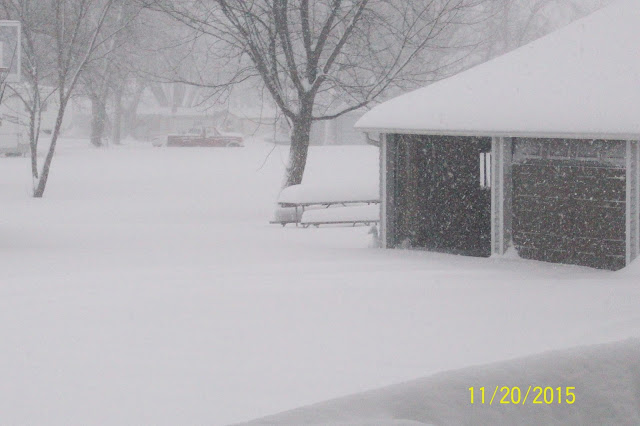 You can really see the big snowflakes falling here, as well as the lower visibility in town. It would be much worse in the open country. The main reason I took this picture was trying to get the snow piled up on the neighbor's picnic table and benches, but it is a little hard to see distinct lines.

Since it was still snowing when I took these pictures, we did get about 2" more snow by the time the storm was over.

The most recent storm we had did not leave much snow but the wind was 30-50 mph all night long and just blew what snow we did get into drifts. The highway that runs through town was blocked between here and the next town to the east. Snow plows were pulled off the roads around 10 pm so no travel advised.

We are told we can thank El Nino for all this snow, plus all the dense foggy nights and mornings. One day last week it was so dense that I could not see the end of my block so visibility was less than a quarter mile to zero, and that was in daylight. I am so thankful I did not have to go anywhere, and feel sorry for those that did. 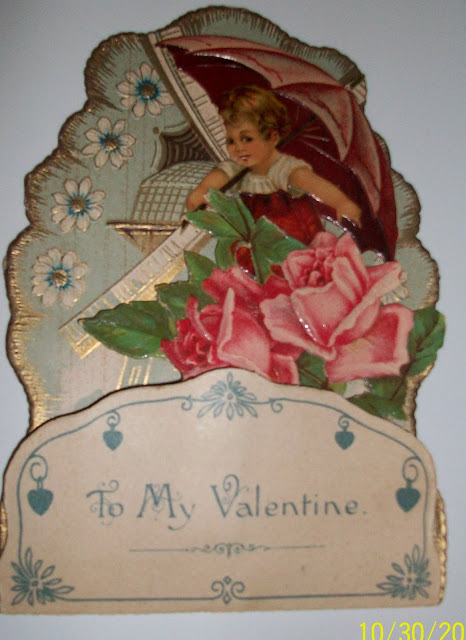 I found these two old valentines among my mothers things. Unfortunately, I do not know what year these were made, but would guess from the 1920's to 1930's.

These are 3-D cards. I am holding this one open below. It is hard to tell in the picture but you can get some idea with the shadows and how different parts are in different places on the card.. 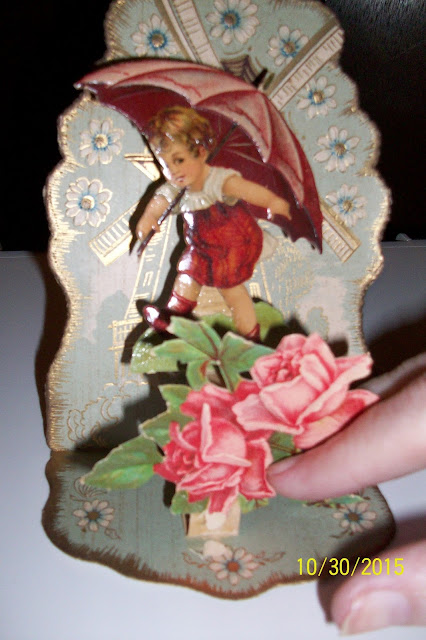 The second card is sweet romance. 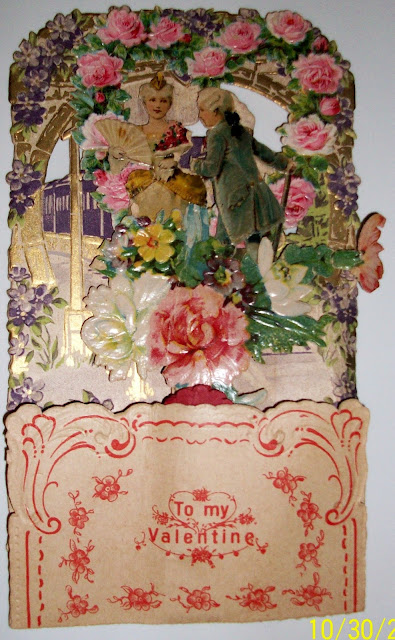 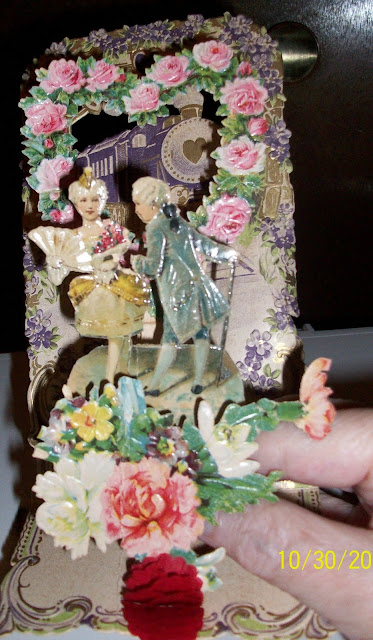 I wonder what the significance is of the train behind the floral heart. Does that seem odd? Maybe it represents the train of love? It does have a heart on the front of the engine. 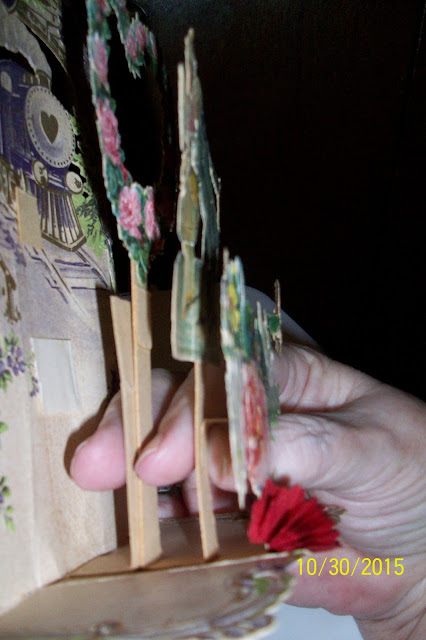 This picture is to show the placement of each part of the picture when opened. I had to hold each part as the glue has disappeared from several parts. This also shows the accordion folds of the flower at the front.

WISHING YOU ALL A HAPPY VALENTINE'S DAY

Remember to tell your loved ones that they ARE loved, not only on Valentine's Day, but every day.
Posted by Lorita at 2:30 AM No comments:

WHERE DOES TIME GO?

Where does time go? How many times to we say that in a year? The older you get, the more you say it.

I have a lot of catching up to do here since I see I have not posted since July. My granddaughter's wedding has taken place and we are already 1 1/2 months into a new year. I had no idea it would take me this long to even feel up to posting again, and then my procrastination set in as well.

After the wedding in August 29 (will post more on that later), I had a couple of doctor appointments the first few days of September. After that, my calendar was clear and I was more than ready for a good rest after the very busy summer.

I basically just shut down, both physically and emotionally, for over two weeks. Then I gradually began to work back to normal. I don't think I am completely there yet, but very close or you would not be seeing this post!

All I wanted to do is sleep and read romance books on my Kindle, or watch my favorite tv shows. The first few days I mostly slept. I ate when I got really hungry but did not cook. It was either frozen meals and the occasional meals brought in by friends, or just sandwiches or peanut butter toast and canned soups. I did not go out to get groceries, so had to do with what I had in the house, or ordered online and delivered to the door. Obviously, I survived quite well.

I will try to get a post or two done every week, and hopefully more than that, but will see how things go. We are back to our early Friday morning Bible studies again, so must work on that as well.
Posted by Lorita at 1:11 PM 3 comments: