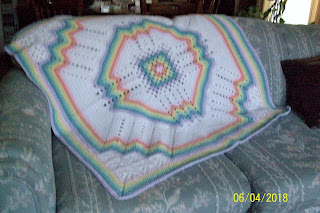 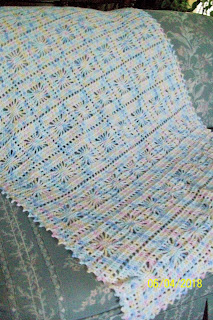 Two baby afghans. My son requested one for a niece, and we decided on the rainbow one at the top. Since my Walmart does not carry much for baby yarns, I had to order online. While I waited for the ordered yarn I decided to start the second one in the other pattern as I had a large skein of that yarn on hand. I did have to buy another skein to finish and Walmart does have that one on hand. So now when they come this weekend, they have a choice to pick from. And I will have a spare in case of another order, or it will go to the church auction next year.

Now I am off to get the house ready for company in a few days. I hope to post again after company leaves. In any case, I hope you all have a great summer.
Posted by Lorita at 2:30 AM 5 comments:

The process of putting a used car in my mouth has begun. Had 2 teeth pulled, but the tooth fairy didn't show up.

It took awhile and some hard work for the dentist to get those teeth out, since one of them had the crown broken off at the gum line. Then he inserted the posts for the implants. Now I wait until things are healed up, and then the dentist will take impressions and have the crowns made, then installation.

I am very pleased with my dentist. I was comfortable the whole 1 1/2 hours in the chair, even though he kept telling me there would be pressure, etc. It was all painless. He warned me of swelling and bruising, but there was no bruising, and only a little swelling that first afternoon. And I only had to take tylenol right after the numbness was gone that evening. I was sure my jaw would be stiff and sore from having my mouth open so far and for so long, but that didn't happen either.

So the worst part is over, except for paying the bill, which will be the most painful!
Posted by Lorita at 2:30 AM 2 comments:

Two county fairs were a big part of my life. One was the local county fair, and the other is called the largest (and best) county fair in the country, which is the Clay County Fair at Spencer, IA. When we talked about that fair we always called it the Spencer fair. It was large when I was a kid, but is even larger now, and brings people from all over the state and nearby states. Many say it is better than the state fairs.

The Clay County Fair is the one I remember as a young kid. It is always in September, and in order to go there during the daytime, we had to get out of school. In those days it was a little easier to get out of classes just to go to a fair. My parents would go alone once or twice during the week-long fair, and I got to go one day with them, and that was usually the day of the stock car races. Then we would go one night for the grandstand shows. There were always popular singers there, and still draws big names today.

I can't remember any that I saw as a kid, but as an adult I saw Oak Ridge Boys, Statler Brothers, Reba McEntire, Barbara Mandrell, Roger Miller, Conway Twitty, and others that don't come to mind right now. Those grandstand shows were much cheaper than the usual concerts.

There was one building that had a large model train setup, with several trains running around the tracks in a small model countryside. In that same building the local radio station was on air at times and you could sit in the room  to listen, or watch through the windows.

It was always fun to visit all the commercial booths set up to grab their free handouts. We would see many people walking around with the free yard sticks and a bag full of brochures and other items. And of course, there was the midway. My favorite ride was the Tilt-a-whirl and the mini roller coaster. I never dared to go on a full size roller coaster. Oh, and can't forget the pony rides, even if all we did was go around the circle. I wanted a pony or horse so bad, but never got one. It was always necessary to have cotton candy, the Tom Thumb donuts, a bag of salt water taffy, caramel corn and snow cones.

I spent a lot of time at the small local county fair while I was in 4-H. I usually had several entries in various divisions, and got quite a few blue ribbons over the years. One year I had a skirt I made that qualified for district fair, which was the Clay County Fair. I only got a red there, but still an honor to qualify. I never did get anything to qualify to go to the state fair. State fair was top honor and Clay County Fair was second. Once I got into high school I had to work in the 4-H building every day of the fair.

One year a friend and I gave a demonstration making jelly filled biscuits at the local fair, which also qualified for the Clay County Fair, so that was exciting. We didn't do so well there but it was a great experience.
Posted by Lorita at 2:30 AM 2 comments: 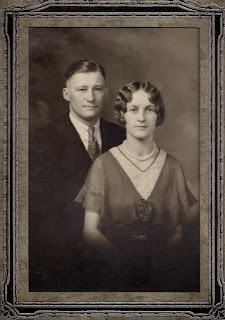 One hundred and twelve years ago today, My dad was born. That is so hard for me to comprehend. He passed away at age 60, so he has been gone almost as long as he lived.

(I wrote a couple of posts almost a week ago, but got distracted and didn't get them sent right away.)

As I am sitting here watching the Indy 500 race, it has me thinking about how I first began enjoying car races, which leads me to think about other things.

It all started with county fairs. Dad would take me along to the stock car races at a fair almost every year when I was a kid. Even though we didn't know any of the drivers, it was exciting. After we got a TV in the 1950's, we watched televised races, leading to watching NASCAR races today, and always the Indy 500. After awhile you get to recognize many of the drivers and have some favorites.

When I met my second husband, stock car races became an every Friday night date at a race track 30 miles away. He and his brothers always had to bet 25 cents on each race. They would each pick a car to win and often those cars would end up not finishing the race, but it made things interesting. We always sat between the 4th turn and the finish line, and saw many spectacular accidents there. Thankfully no one was ever seriously hurt, though a few had to make a trip to the hospital to be checked out.

Part of one race night there was a 2-driver race. That meant there were two drivers in one car; one did the steering and the other did the accelerator and brake. That made things interesting! Neither man had complete control, making it difficult. I wonder how much time they had to practice doing that.

Always a part of those Friday night races was sprint car racing. That was new to me and not my favorite as those cars are so loud and had a high pitched whine. Ear plugs were necessary for me as I wanted to keep my hearing! They were exciting though, and the drivers were very competitive. It always amazes me that those drivers survive some of those crashes, when the car is totally demolished.

That was a dirt track so it got quite dusty and we were covered in dust by the time we got home. If it was wet, we often got hit by small pieces of mud that got spun up by the racer's tires. That was not fun. We always sat close to the top of the bleachers, which was as far away from track level as you could get, so those mud clumps traveled quite a distance.

Enough of racing. I will talk about county fairs in another post.
Posted by Lorita at 7:07 PM 2 comments: