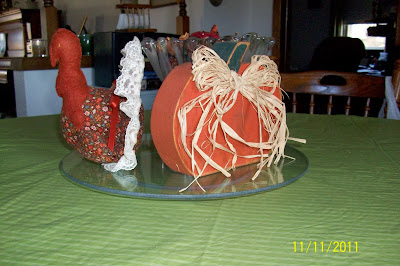 Yes, I am still here, wallowing in clutter and undone work. After working many, many hours for 2 weeks on genealogy, everywhere I look I see things that need to be done, and have a long list in my mind of things that must be done and things I want to do. There just are not enough hours for me to do them all. . . . at least not for me since I don't move very fast. I wish I could make my body move as quickly as my fingers when I type.

My trip down Ancestor Lane proved to be quite interesting. I went much further back on some branches of my tree than I ever expected to. My dad's side bore the most fruit and was able to go back to the 1600's before coming to a dead end. There I discovered that I am not 99.9% pure German! First I found Dutch ancestors on both of my dad's side, and since I married a true Dutchman almost 25 years ago, and moved into a very Dutch county here in Iowa, I was tickled pink! No wonder I have always felt at home here and have enjoyed learning more of the Dutch-American culture (especially their foods).

Then, as I worked further back, I discovered I also had some ancestors that came from Switzerland. And the last ones really floored me. I have ancestors that came from Norway and Denmark!! I was even lucky to find a couple of short biographies of two many-times great grandfathers and one stated that he had been a wagon maker. I think these two men came from Norway, but will have to check back on that. There are so many facts and dates that I covered that I have not absorbed them all yet.

Now, back to the list of things that need to be done. Am I the only one who looks at all the work to be done and am rendered useless? I feel overwhelmed, and then just shut down. I end up sitting at the computer and playing games and/or checking Facebook. I haven't even dared to check Pinterest for a long time. I get so many delicious looking and sounding recipes shared on Facebook these days, along with craft ideas and quilting, etc. I believe Facebook has become the new Pinterest!

I have also been preoccupied with the state volleyball tournament and state football tournament games this week. I don't know who thought they had to schedule both tourneys during the same week! Some schools end up with teams at both events. How are the fans supposed to support their teams? They can't be in two places at once. For instance, yesterday afternoon two local schools played the championship games. One was a town 16 miles from here, in our conference, who played and won their championship game. And after that game, the other team was one of the Christian high schools in my town that played, but lost the championship game. An hour after the volleyball game started, a football game started with a good team from another town 20 miles away, and also in our conference. That was a semi-final game so they will be playing in the championship game next week. Another team in our conference, from a town 10 miles away, will be playing their semi-final football game later this afternoon. The football games are televised so I watch them. I think the volleyball games were on TV last year too, but for some reason were not this year. At least I was unable to find them, so listened to them on the radio. It just isn't the same as seeing them. Now, none of these games involved the same school but it was quite possible that it would happen since all of these schools have sent teams to state at one time or another for every sport, and some years the girl's basketball team and the boy's team from one school, plus their football team all make it to state the same year. Add in the volleyball team, speech team, and any other contest and chances are good that things will overlap.

I never had an interest in volleyball until my granddaughter played in high school. Then I attended most of her games and got to love it. We didn't have volleyball in the school I attended so many years ago. Those games can get really intense! I also love to watch them at the Olympics, both regular volleyball and beach volleyball.

This was going to be just a short post, but you know how the words keep coming for me even when I try to be short. I do have some other things to write about for other posts so keep checking back. They may be sporadic for awhile until I get things a little more back to normal around here. Normal. Just what is normal? I think inactivity is the normal for me, to be honest! But now I really do have to try and get some cleaning and putting away done before that football games starts, because I know I won't feel like doing much after that is done.