This is embarrassing!! No judging, please. Unless you are a super clean, cleaning freak (like a late sister-in-law of mine), I can bet you have a spot or two that gets ignored, too. I have been looking at this shelf in the kitchen for quite awhile, intending to get to it soon, but it just didn't seem to happen . . . . until today. 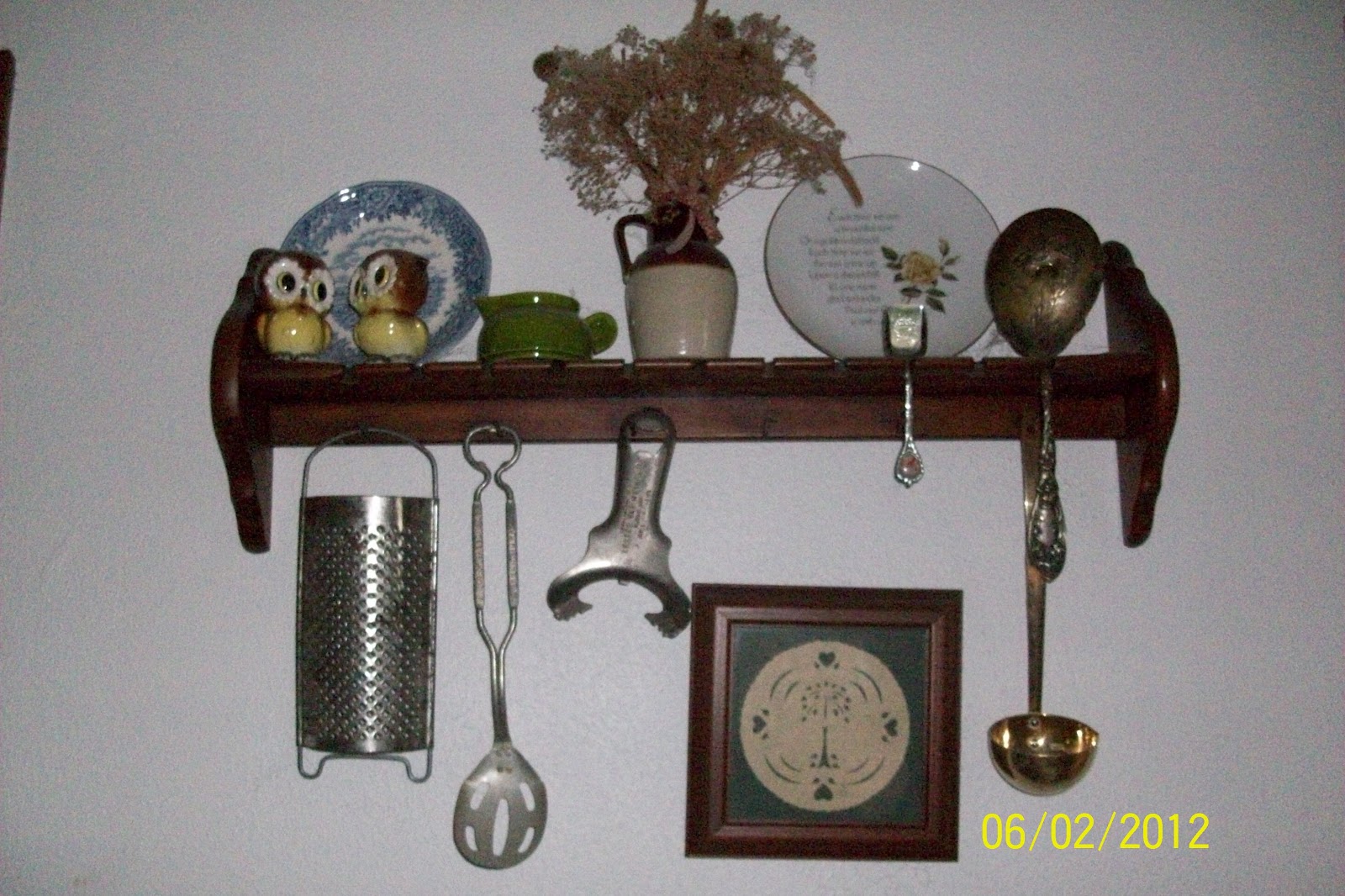 I show two pictures as the top one is a better picture, but later I had taken the frame down and put up the old enamel strainer in it's place, and that is how it looks today. 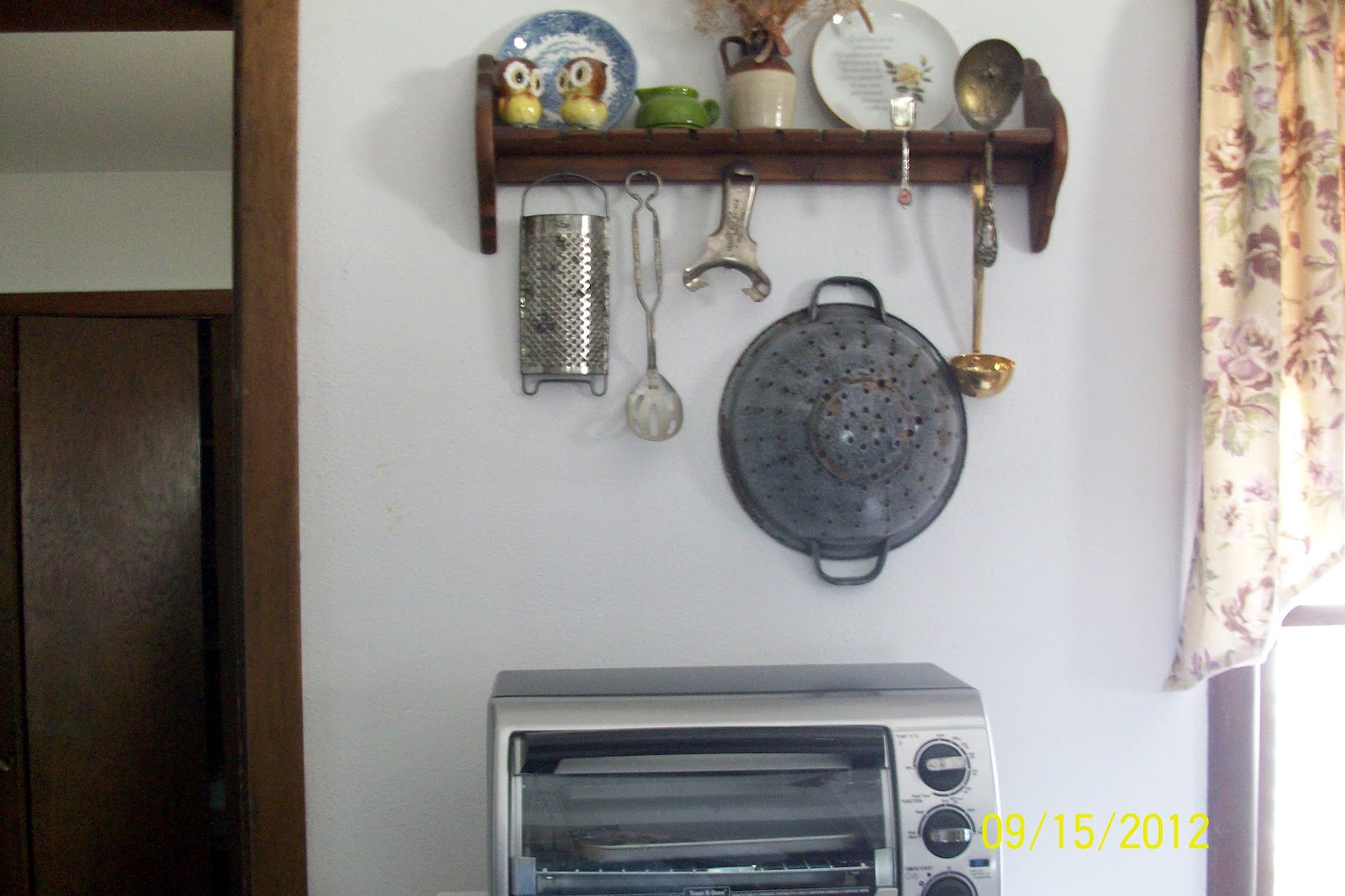 I decided to somewhat get back on the Flylady schedule, at least for zone cleaning, and this week it is the kitchen. Usually when I get myself psyched up for cleaning, I start in the bedroom, and that doesn't make sense since others don't really see my bedroom except when they walk by the door to get to the living room. But, the kitchen is as good as any place to start. Therefore, the first thing I knew I HAD to do is that shelf. Here are some before pictures, and if you look closely you will see the fringes of 'hair' on the edges, as well as the thick dust that settled on things. I did not take a picture of the empty shelf and how dirty that was, because I would have had to get the step stool out, and my knees won't let me get up on that anymore. Look at this gold ladle. The inside of the cup part is supposed to be shiny! 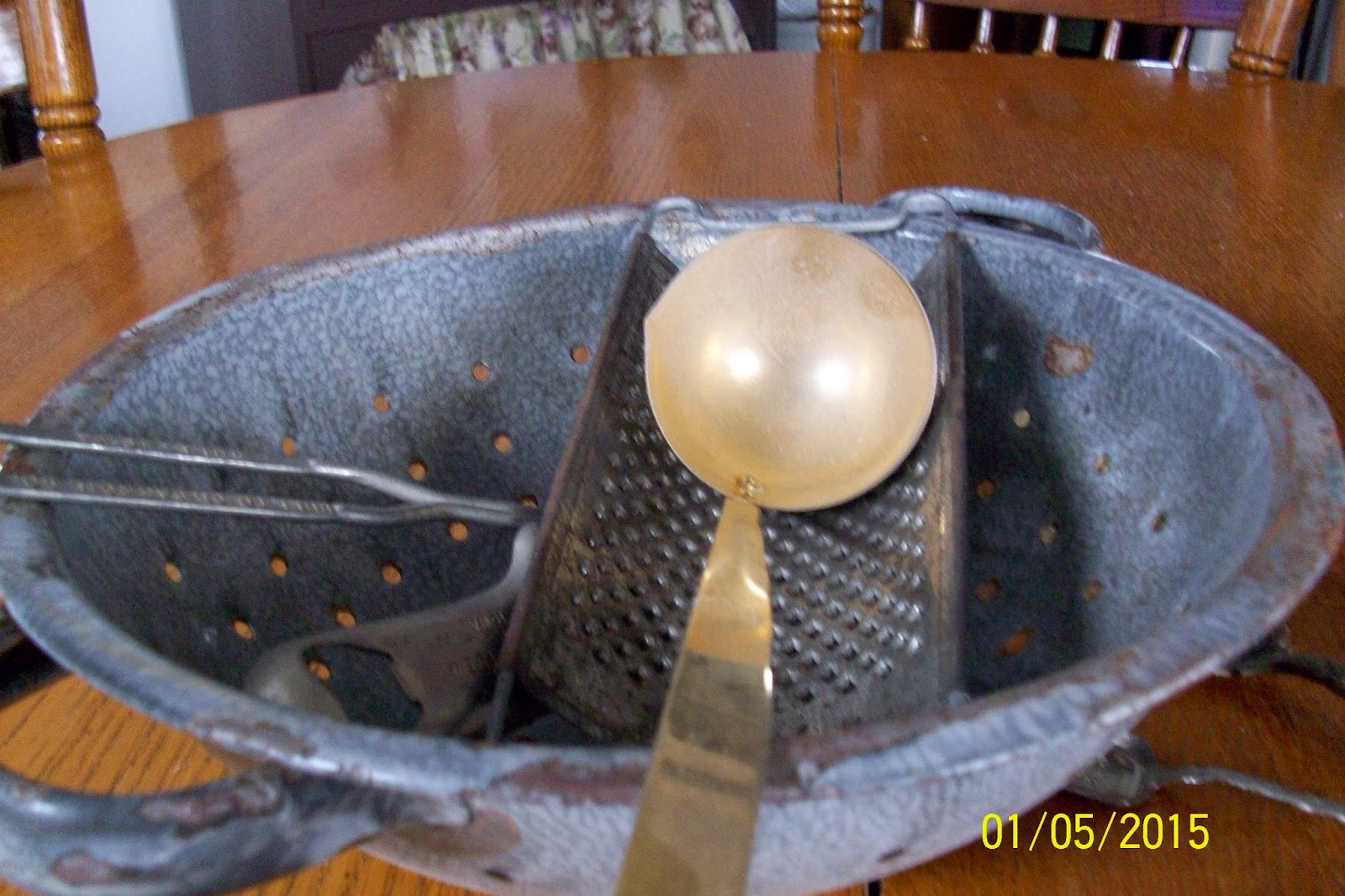 Look at the 'hair' fringe on this little pitcher, not to mention the thick dust on the rest! 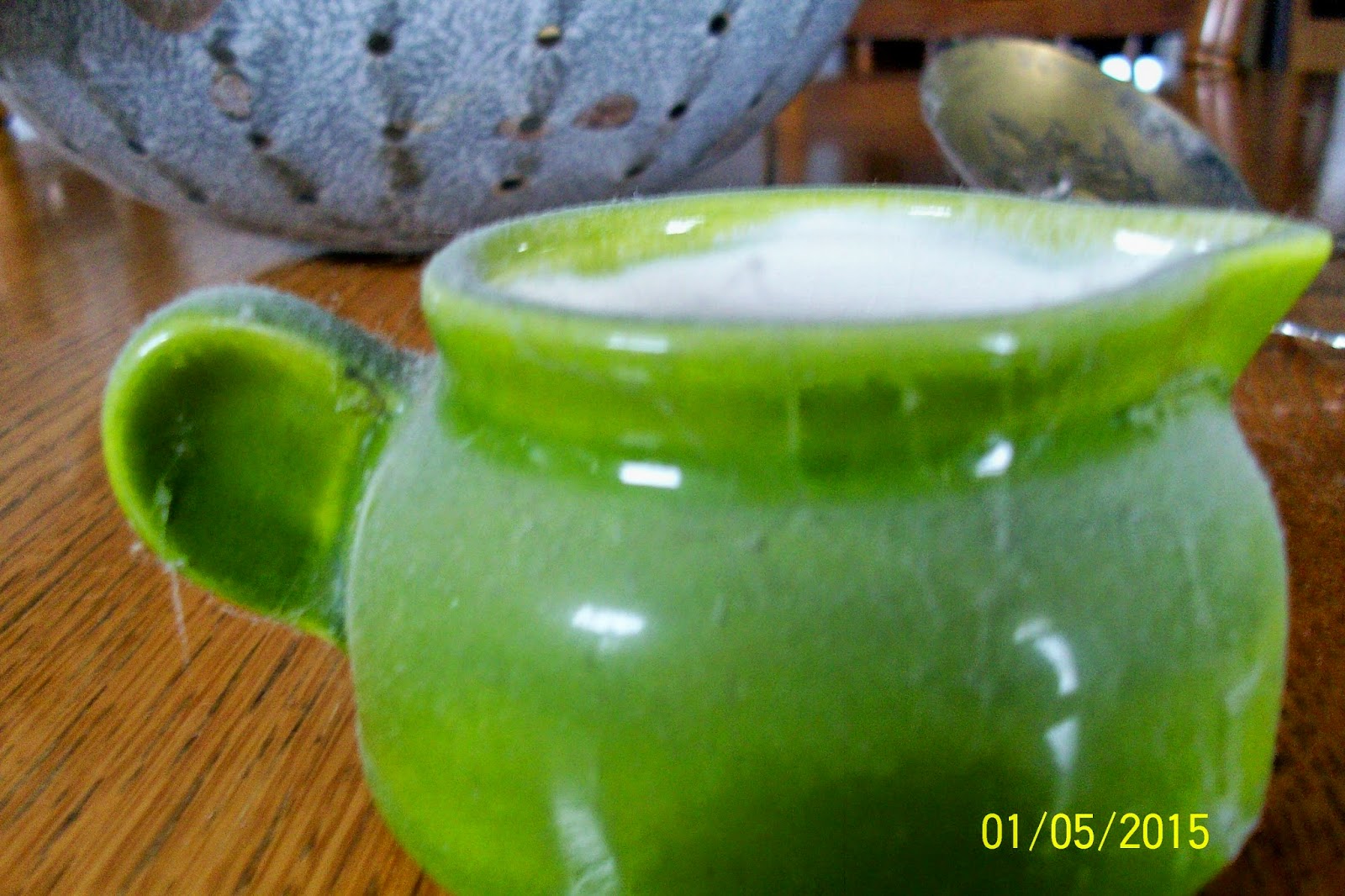 Lots of hair on this large spoon, and the poor little owls have turned 'grey' and almost blinded by the dust over the eyes. 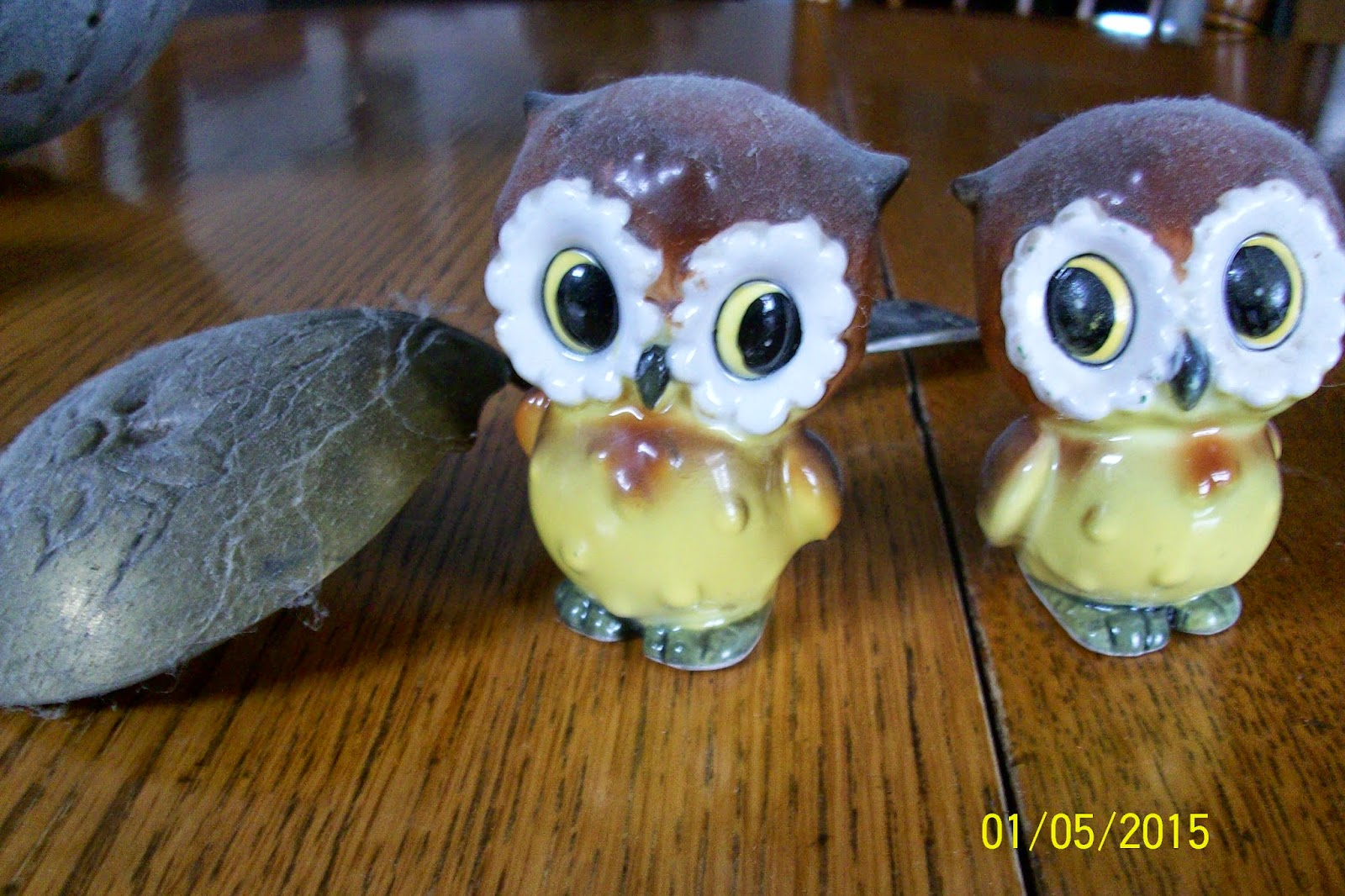 Easy to see the hair on the left side of this place, and if you look close, it is there at the front as well. 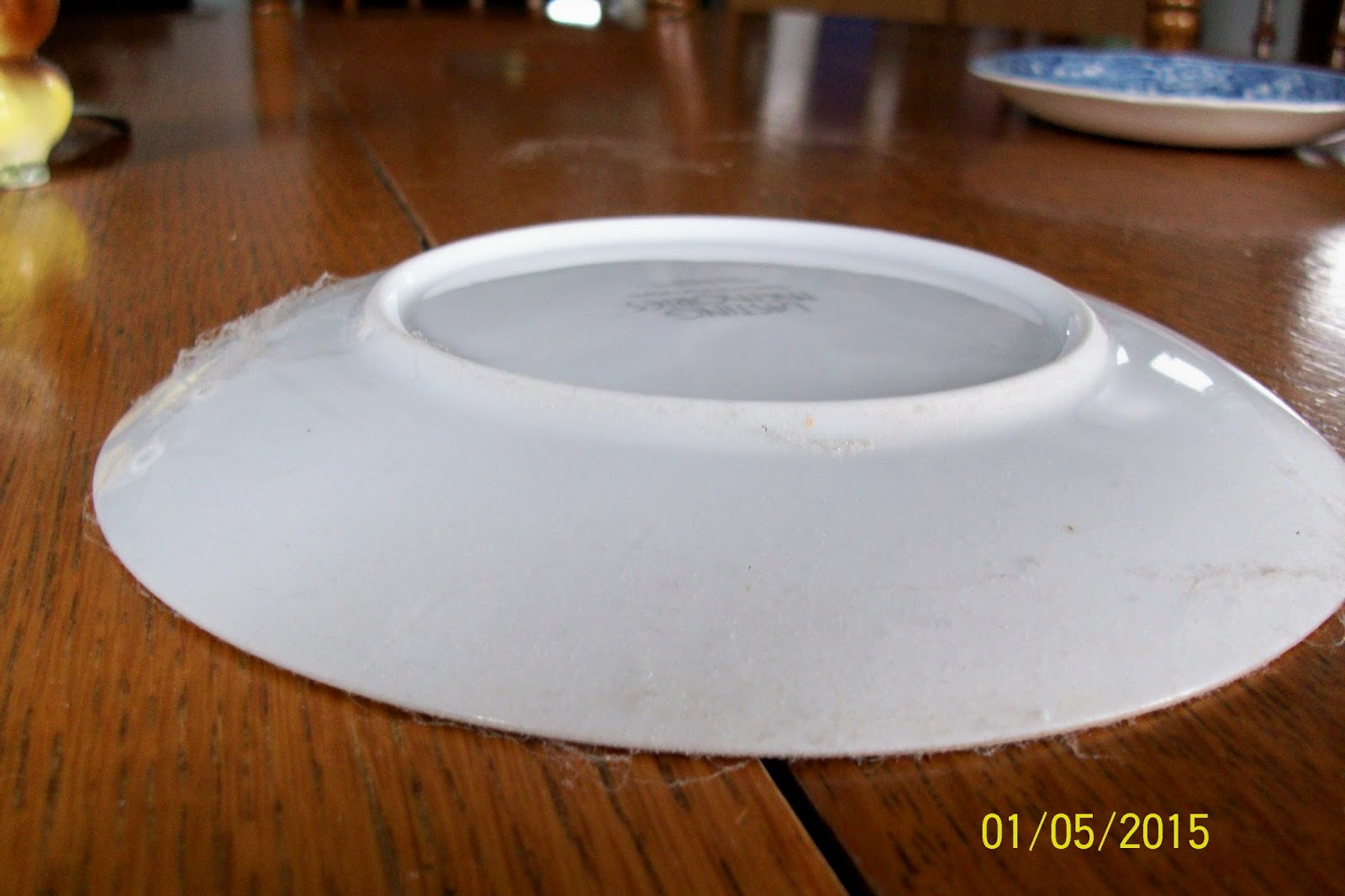 Yes, more hair around the edges of this plate. The other dust isn't so visible on the pictures. 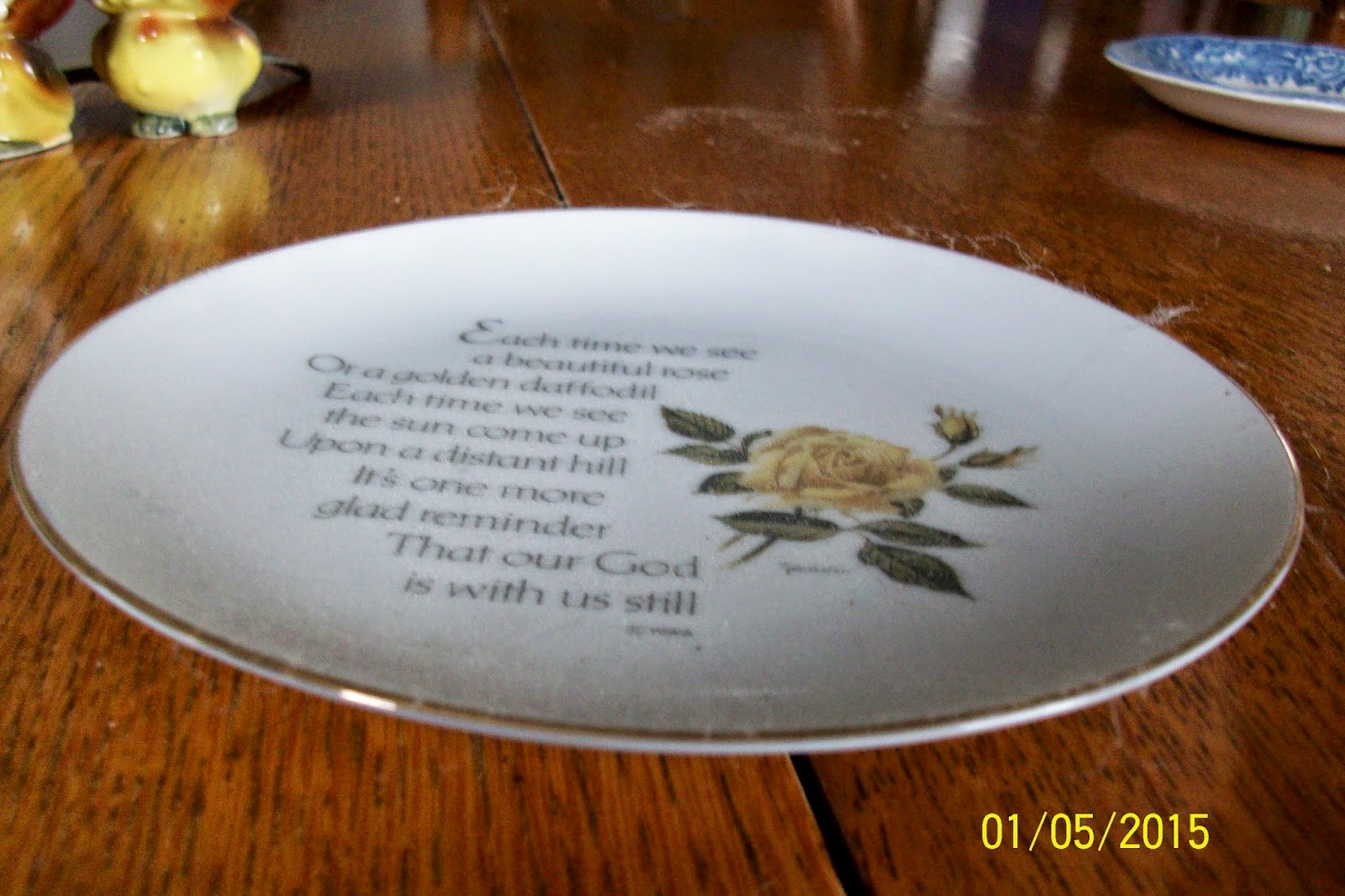 And this poor dried arrangment is just totally covered with the fuzz. 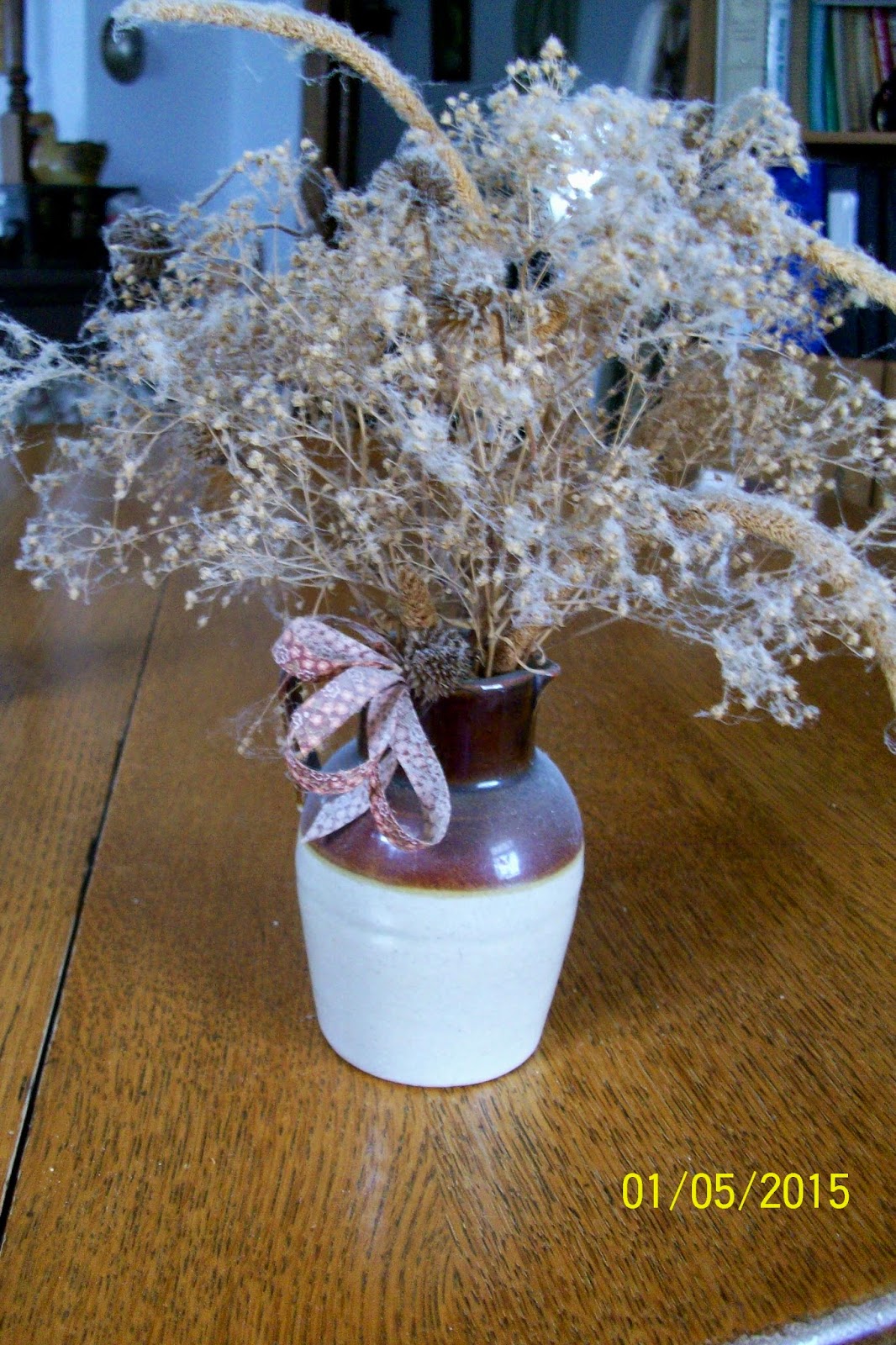 I am not sure if I can even get this to look half way decent. The dried stuff is very fragile. I happen to like this and can't replicate it as some of the stuff I picked outside several years ago, so I really hate to dump it and put something new in the jug. I know, it isn't the most beautiful arrangement, but I still like it.

I pulled as much of the fuzz off as I could without causing too much damage. Then I tried a tweezers to pull some more out of the smaller spaces. But there is still quite a bit left. I will try tweezing a little more, then put it back up on the shelf for now. If, or when, I find something I like for a replacement, then this will go out.

Everything else is washed, including the shelf, and put back up. At least I know it is clean and hopefully smells a little fresher.

Now to decide what I will work on tomorrow.
Posted by Lorita at 2:35 PM