A GEM WITH NO STONE 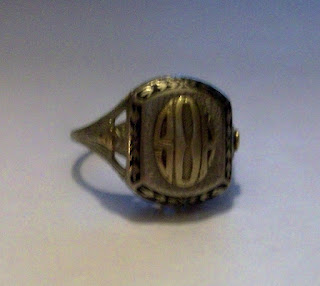 My hometown is having its 125th celebration this summer and a Facebook group page was set up. People are posting old picture and telling stories of what they remember growing up there. Someone started a discussion on class rings and I remembered that I have my mother's class ring from 1927!

So I got busy and took a few pictures of this pretty ring. In the top picture I realized I had set the ring down upside down for the picture. The design on the top of the ring are supposed to be the initials of the school - OHS. 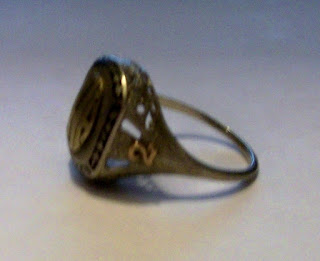 These two pictures show the year - the 2 on one side and the 7 on the opposite side. 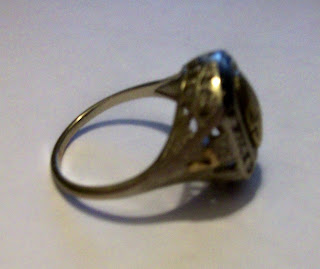 The next picture shows off the filigree a little better. It is really quite a delicate ring compared to later years. 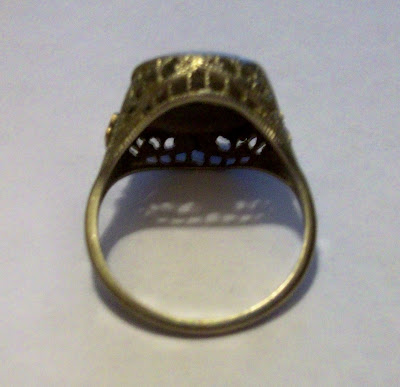 My mom had really small fingers compared to mine! I will admit that mine are bigger now than when I was in high school. As shown in the picture below, I could barely get it over the knuckle of my pinkie finger. And only that hand as it would not go over the knuckle on my left hand at all. 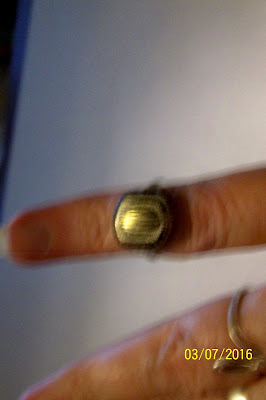 I apologize for the blurry pictures. I had an awful time holding the camera with one hand and be able to push the button to get the picture and keep the camera perfectly still at the same time. (That can't be age!)
Posted by Lorita at 12:30 AM