STAR OF THE SHOW


If you a fan of modern country music, and know who Thomas Rhett is, his current hit is "Start of the Show".

When I started working on this post I titled it CHURCH AUCTION, but "Star of the Show" was playing on the radio at the same time, and it fits. 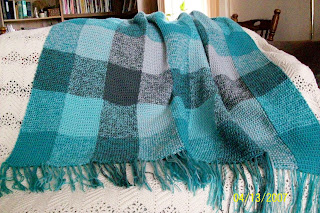 This afghan/blanket was the star of the show at the church auction. It was again chosen as the featured item where the auctioneer asks for $20 bid donations from those who are not bidding to buy the item. They have chosen mine almost every year, which always amazes me. This one sold for $200 and made $600 in donations. It always makes me feel my time was well spent in making this.

This was not hard to make but did take a little bit of time in getting the squares to meet up 'perfectly' while sewing the strips together. And fringe always takes time, and I don't always add fringe even though the pattern calls for it. But I feel it adds a lot to this one.


The one other project I managed to finish in time for the auction are the children's bear scarves. 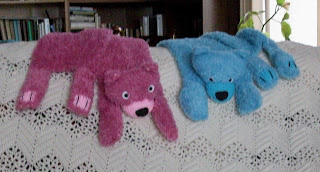 These came as kits with head and paws already made. All I had to do was knit the scarf and attached the head and paws to each end. The yarn is 'fur' or 'eyelash' type and worked up to a very soft and cuddly scarf.

They sold for $50 each, which made me happy as each kit cost almost $20 just for materials. 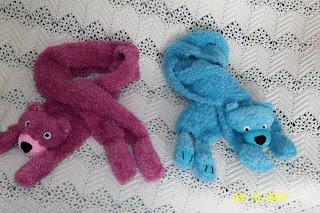 In this picture I tried to pose them as they would be worn to give you an idea what they should look like, but that didn't work out very well. I wish I had a child here to model them!

If you are wondering about the white afghan used as the backdrop, that is one I made about 30 years ago, or longer. It has been an all time favorite over the years and I have made a lot of them from this pattern.

I have already started on some projects for next year's auction, though there is some talk about only have one every other year. But we do need some kind of fund raiser every year to help pay off our new building loan.