VIEW FROM MY FRONT DOOR

Here are some pictures for a glimpse of the results of a big snow storm we had earlier. We got somewhere between 8 to 10" of new snow. Don't pay attention to the dates on the pictures. Somehow that got screwed up and I didn't realize it until now. I can never remember dates and didn't write down the date of the storm, but was toward the end of January, 2017. 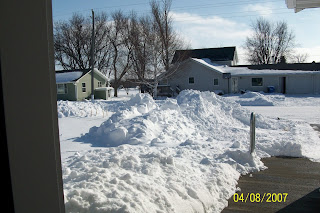 I tried to get different angles to show the depth of the piles of snow after the scooping was done. I am standing in the front doorway as I did not have shoes or coat on, and it was COLD out there. 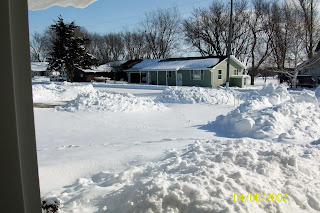 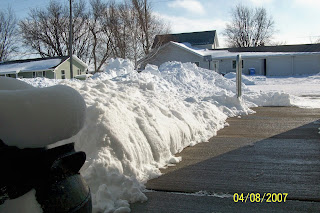 This one probably gives the best angle for the depth. Notice the white 'cap' on top of my old cream can that sits right next to the front door. The wall of the garage goes all along the right edge of the sidewalk. I think it 'helps' some deeper drifts to form right on the sidewalk when the wind is just right. I am so thankful I do not have to get out there and scoop it myself. One of the perks of living in a managed unit. 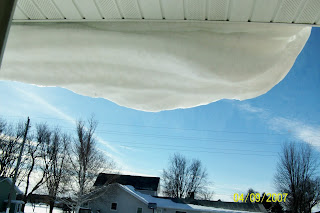 Now this picture is actually taken from my front window. Notice the drift overhang that formed on roof edge. The roof extends out a few feet from the house which is nice, especially in the summer as it keeps the hot sun out of the windows in the afternoon. 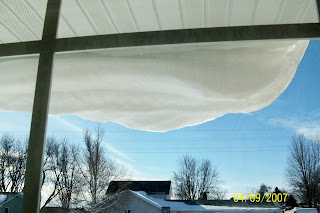 Another view of that roof drift. You can see the strips that make the windows look like smaller panes. I cannot remember what they are called right now. Brain fog again? 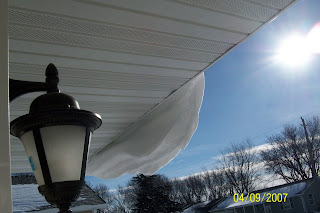 I took the pictures at the right time because it was not very long afterward that the whole thing dropped off the roof!

Just another normal winter in Iowa.
Posted by Lorita at 2:30 AM