My View This Morning 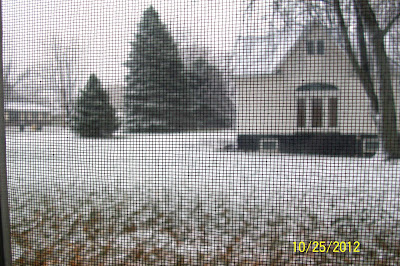 Yes, winter is here! Thankfully, it isn't here to stay this time. 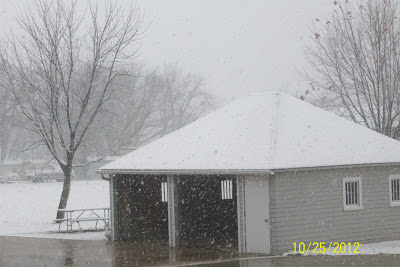 See the large snowflakes in front of the garage openings? This was taken 1/2 hour later than that first picture. Strong north winds, but just now the wind stopped a couple of seconds and it was like the flakes didn't know where they were supposed to go. They were floundering around. . . until the wind started up again.
Aren't we sometimes like that? We go wherever the wind blows us, without any plans or self direction. And when that wind stops, we have no idea what to do next, which direction we need to go, or even where we are headed.
Even though I hate the idea that winter is here, even briefly, I am mesmerized by the large flakes as they come down. Everything, even though not pretty as a whole, has its own beauty, if we only look for it. (one beauty of this snow. . it doesn't need to be scooped!)