God has been giving me little gifts recently. These are things He knows I take delight in and am so very thankful for them.

The past few days I have been hearing a beautiful bird song very close to the front of the house. It has many pretty notes and phrases. I had heard it before and didn't know what kind of bird was doing the singing since I could never see it when it was singing. Since I keep hearing it close to the house I happened to think that maybe it is building a nest atop the front door porch light since robins have built there in the past. I very quietly opened the front door and looked through the storm door, looking to the right of the door where the light is, and there was a purple finch! I am about 2 feet away from it. It didn't notice me and kept right on singing for a bit. I hear it usually first thing in the morning and again in the early evening so I am almost sure there is a nest there but I have not gone outside yet. It has been too cold! Such a pretty bird with a pretty song. 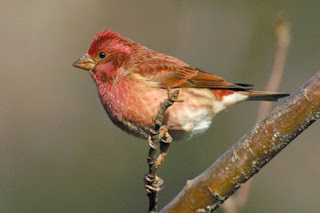 Yesterday I kept seeing another bird that I had not seen before. It was hanging around my patio quite a bit so am wondering if it is or has built a nest nearby. At first I thought it was a slate junco but we usually only see them in the winter here, although with all the snow we have been getting this month, it is still winter. Since it was around so much and so close I got a better look at it and decided it was not a slate junco but had no idea what it was. Out comes my bird book. The junco has a yellow beak, this one had a black one. The junco has a black throat, this one had white. The only thing I could find in my book that looked similar was an Eastern phoebe. That is it! I didn't know they were in this area at all. 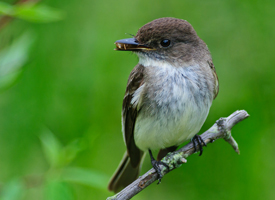 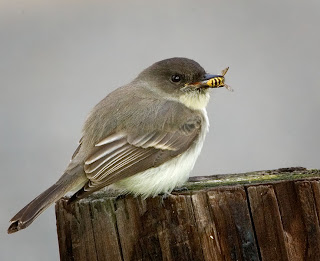 In this second picture you can see it looks a little like a slate junco only the gray isn't quite as dark.

I the last week or so I have seen another bird that I had never seen before, and as far as I can tell by my book it is a brown creeper. It kept climbing up the trunk of the tree right outside my living room window so I got to watch it for awhile, too. It is a small bird, and luckily I was able to get a good look at its beak. I found it on the same page as woodpeckers, but acts similar to nuthatches. I have also seen nuthatches on my trees recently, and they are another pretty bird. 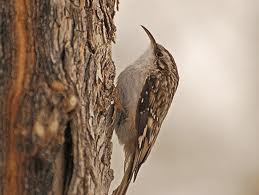 About 2 years ago God showed me three birds that I rarely get to see here, all in one day! There was a pair of goldfinch first. I know they are around here but rarely get to see them. I should put a feeder out for them, then I would see them more regularly. Then a cardinal landed in a tree very close to me. It didn't stick around very long, but I was able to watch it for a minute or two. And then. . . . a bird that I had no idea was in this area at all . . . an Eastern bluebird!! So in one day I saw red, yellow and blue beautiful birds. PTL

I have seen some other very small brown birds that I have not been able to find in my book. They are very quick birds and I have not seen them up close, and only for a few seconds at a time. They don't stay in one spot long. Maybe some day I will be able to find out what they are. I could look online but I have no idea what they might be so would be looking at lots of bird pictures.

I do so enjoy watching the birds in their natural habitat, but don't really want any in cages, though I have had parakeets in the past. I am hearing the purple finch right this minute! I wish I could record the song.

When I lived at the other house with my husband, we did feed the birds there. We mostly saw house sparrows by the dozens, which I barely see here. And we had turtle  doves, starlings, blackbirds, robins, bluejays and the squirrel that liked to climb up on the feeder and break it. I did see a nuthatch when we still had the big pine tree on the yard. And there was a nighthawk that nested on the top of the business next door. They are cool to watch in the evenings and hear their cry. And we did sometimes see purple finches and chipping sparrows. What is odd about the last two. . . the finch is the size of a sparrow and the chipping sparrows are the size of other finches like you find in cages for pets.

Almost forgot but there is another bird I saw up close for the first time. A chicken hawk! It flew right past my bedroom window as I sat here at the computer. I just saw this brown blob zip by right next to the window and had no idea what I saw. So got up from the chair and looked out and this hawk was chasing a rabbit in and around my big maple tree! I don't know if the hawk was successful or not as the squirrel finally left the tree and ran toward the garage and out of my sight. I suspect he was heading for the evergreen tree several feet from the garage. That might have been his downfall as it left him wide open to the hawk.

I know God is giving me these little glimpses of different birds as gifts and reminders that  He loves me. We just need to sit still, watch and listen for them.