Views from my Window 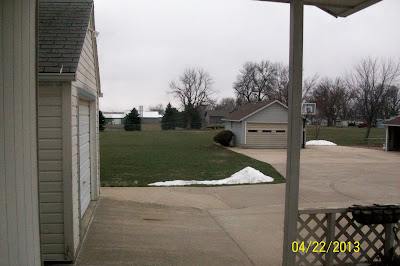 I am late in getting this posted. My intention was to write this a couple days ago but for whatever reason I was not able to upload these pictures. I kept getting a message telling my the upload failed and the the server rejected it. Then life got busy and so here we are a few days later.
The first picture was taken at 8:30 am on April 22, 2013. That was all that was left of the 4 to 5" of snow we had gotten on April 18. The grass is greening but you can see the sky is gray. 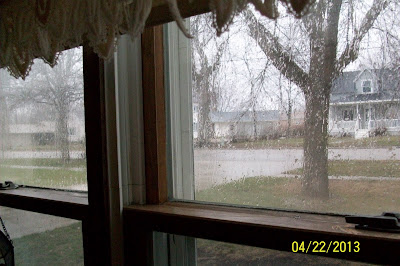 This picture was taken at 10:00 am the same day. See the rain on the windows and the wet street? Later there was some sleet mixed with the rain and was beginning to collect in some places. 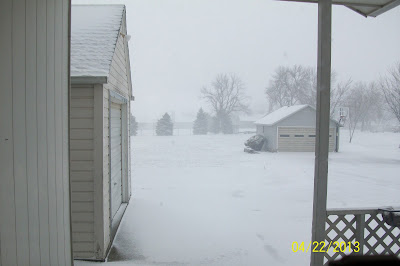 And by 5:00 pm that day it looked like this! Ground is white with snow again and it is still snowing here. One more week and it will be May! There is not supposed to be snow on the ground anymore, and the temps should be in the 60's, not low 30's.
Schools were let out by 12:30 as the roads were getting slushy and freezing. The next morning schools announced a 2 hour delayed start, and later was cancelled for the day, even though the sun was out and snow was melting. Our streets and driveways were clear by mid morning and dry by noon. But I hear the country roads were a mess and almost impossible to navigate. The  Christian school did have classes but I heard they only had about 50% of the students there. As I write this today, four days later, there is barely any evidence of snow. I know these Iowa farmers are anxious to get into the fields to prep for planting. But rain is in the forecast for next week. It is best not to complain as we still badly need to moisture. We are already on water restrictions and it isn't even summer yet. Last year our spring  came a month early, as did summer. We had temps that were way above average and spring flowers bloomed a month earlier than normal. What a difference a year makes. This year spring is about a month late. I think 'abnormal' has become the normal today. 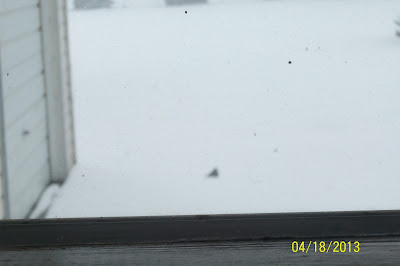 This picture is not very good but the best I could get with my cheap camera. It doesn't look like much. It was taken after we got the 4 to 5 inches of snow on April 18. The dark blob toward the bottom of the picture is actually a robin sitting in the deep snow. It looked so bewildered, and probably was wondering where all this snow came from, and how he was going to find something to eat that day. I am sure you have all seen pictures of deer, dogs, and other animals trying to wade through deep snow. If the robin had been able to walk, he would have been trudging through deep snow up to his waist. He sat there for quite some time before flying off. I felt sorry for the poor thing but I had no worms or bugs to feed him. This is northwest Iowa.
Posted by Lorita at 10:04 AM