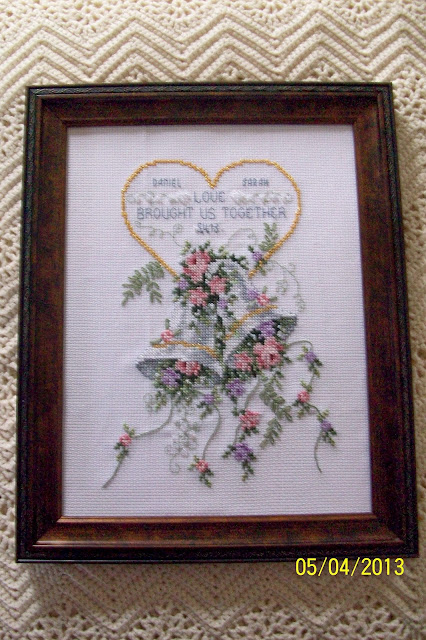 I attended the wedding of a grand-nephew Saturday. This is the counted cross stitch picture that I made as their gift. It is hard to tell in the picture but there are several crystal clear beads scattered all over, including what look like white blobs on either side of the word 'love'. I am disappointed they don't really show up that much even when seeing it in person. The blobs are in heart shapes and the smaller blobs represent grape clusters on the vine. There are gold filament threads mixed with regular floss in the heart and bands of the bells. And there are other kinds of glittery filaments in the bell outlines. That filament thread is a pain to work with! I finally got used to it about the time I was done with that part. I most certainly would not advise beginners to attempt that.
I wasn't sure I would be able to find a ready made frame for it as it is not the usual size. It is 10x13. But I did find a limited selection in Walmart. The first one I settled on was a bit more expensive than I wanted to spend, but after leaving the frame aisle, and as I was heading for the grocery department, there was a display of inexpensive frames - all the same price no matter what size. And there were at least 2 styles in the size I needed! I thought this one was the nicest one of them all, even the more expensive one.
In my procrastination mode, I did not get it framed until the morning of the wedding, which was at 3 pm. So after I had finished with the framing I very neatly wrapped it, and went about getting myself ready for the day. Then . . . I realized I forgot to take a picture of it! Oh, no! I was able to carefully reopen one end and pull it out, then barely getting it back in the wrapping and retaped. It really takes a lot of effort for me to remember to get pictures for this blog! Of course, procrastination does not help. Can old people change old habits? I hope so, but so far it hasn't happened.
At the reception gift table I noticed there were quite a few gifts about the same size as mine, and just as thin, so probably pictures. I hope there weren't others that found the same stitch kit that I did!
The wedding itself was simple and nice and had a western theme. That seems to be most popular right now. The guest 'book' was like an unpainted old barn door and people wrote their names on it with Sharpies. It is a cute idea, but where is it going to go? They will need a large wall to hang it on, and after you get tired of looking at it, it can't be put on a shelf or in a drawer. But that is this old lady's opinion. All in all it was a pleasant and fun day, and may the bride and groom have a peaceful and happy life forever.