Last week my kids hosted an open house for my 75th birthday. They used a theme of sewing and buttons since I have always done a lot of sewing and needlework. I am sure they remember me sitting at the sewing machine a lot, and sitting in my chair in front of the TV at night knitting or crocheting some project for all their lives.

It may be a little hard to tell  in this picture but these mints look like buttons. My oldest daughter made them from the old standby recipe of cream cheese and powdered sugar and made the holes in the buttons with the prongs of a sweet corn holder. I had to ask her how she did it as I noticed the holes were so evenly spaced on every mint. She used a small lid to make the little button mints. She says she got ideas from Pinterest.

The circles on the cake represent buttons as well. And notice the spool of thread with a needle at the end of the thread in the center. 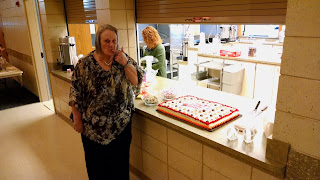 Here I am, testing the frosting and it was yummy cream cheese frosting. (I didn't really stick my finger in the frosting😃) The cake and frosting were yummilicious. 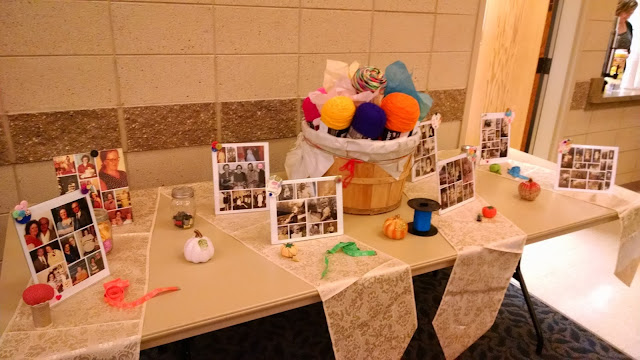 This is the photo table my family set up. You can see several of the sewing notions, and that huge basket of yarn that my son gave me later! He specified that the yarn be used for making hats and mittens for mission, which I did for several years.

My younger daughter made the photo collages and put in transparent frames, then put a variety of buttons and papers with sewing/button themes at the top corners.

Every time she came here she went through all the old photo albums and took pictures with her phone camera of the pictures she wanted. Then each collage is made up by my age or period in my life. She did an amazing job of arranging to fit the pictures together and have them turn out so evenly. I will post about those later. 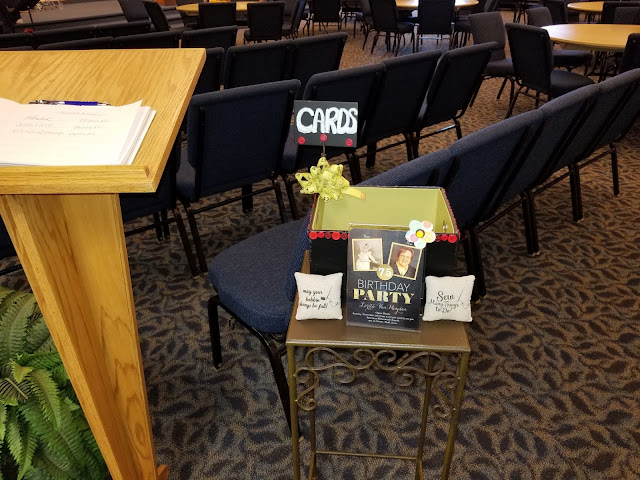 This is the box for cards my oldest daughter came up with, and the invitation is center front.

The party was a lot of fun as I saw some long time friends from high school and family friends that I had not seen for a long time. There were also a lot of church friends who stopped in as well. I have not been able to get to church for a long time so it was wonderful to see them too.

The whole weekend was very busy with all three of my kids and their spouses, and three of my five grandkids, with one grand son-in-law. All stayed overnight except for my son and his wife so it was a houseful! There were 5 people sleeping on the floor with air mattresses that they brought along. Just the 13 year old twins that had to sleep on the floor without mattresses. I would have never been able to do this at my former house.

That was Saturday night. Sunday morning I got up and put 2 pans of Grands cinnamon rolls in the oven for a quick breakfast before church. They were a huge hit and so easy.

Check back for more of the events.