Look what I found

As I was going through these, still in their original envelopes, I found another treasure. My mom had the foresight to insert a lovely letter from my grandmother - her mother - that she sent me for my confirmation! I did not remember it being there, or even receiving it. Isn't that sad? But that was way back in 1956.

I did not know my grandmother Ada very well. I had only seen her 3 times in my life since she lived in California and we lived here in Iowa. I went with my parents shortly after Christmas when I was 4 years old, driving of course. Flying was not done very much by the general public back then, probably because it was too expensive for the average person. And there were 3 of us. So we drove out there. I don't remember the actual trip, but I do remember Grandma and her house, and that she made me drink coconut water because I didn't feel very good. I had never seen a coconut before, other than shredded in a bag.

My second trip was with my mom and her sister from Illinois, and we rode the train. That was exciting and I loved the whole trip, and getting to eat in the dining car. I remember I ordered cold cereal for breakfast one morning and they brought rich cream to pour over it instead of milk! No, I did not like it. I grew up drinking whole milk but not straight cream. The next time we knew we had to order a glass of milk that we could pour over the cereal. It the cereal had been hot - like oatmeal or cream of wheat - the cream would have been okay. I think. I know it would be today but not sure if I would have liked it then.

And the last trip was with my parents and Mom's sister and her husband (from Illinois) in the summer of 1957. That was also a driving trip and I remember some of the towns where we spent the night in a motel along the way. I even found some pictures taken of those motels and I might share them in a later post. They looked a little different than the chain motels now.

But, back to that letter from Grandma. Here are the pictures of it. I am not sure you will be able to read it, but will try to make it large enough to read. She mentions sending some gifts. She loved to sew and would often send me some clothes she had made for me, and often sent doll clothes she made and a pieced doll quilt that my daughter now has. I gave it to her when she had her first daughter. 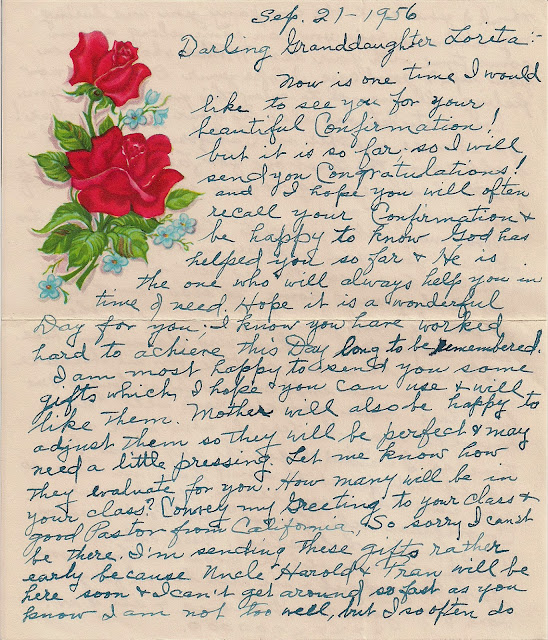 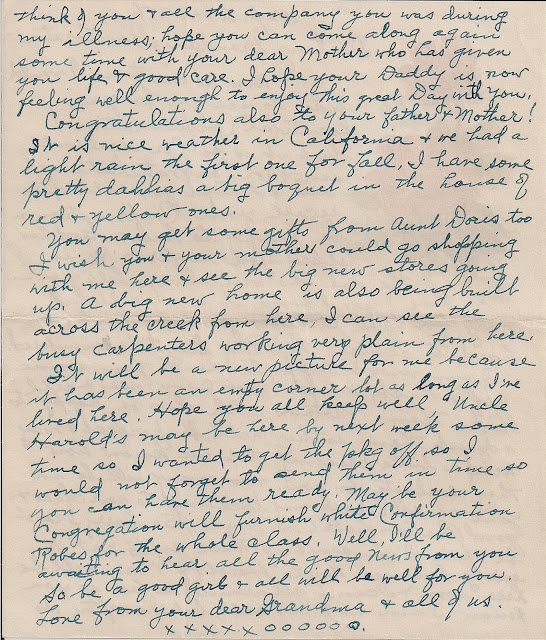 The letter means more to me now than I think it did at the time I got it. I was only 13 years old and barely knew 'this woman'. After I have learned more about her in doing the genealogy, I realize how awesome this woman was. I just wish I had the chance to know her much better.

I don't remember what gifts she sent me, and wish I did. Maybe I will run across a picture taken with them some day. Part of it must have been some clothing she made. I also think she sent me a hat - the kind that all proper ladies and young women wore to church on Sunday mornings - and wouldn't be seen dead in them today. LOL I don't know if there was one in the confirmation gift box though.

This has been a fun day of reminiscing for me. I hope you enjoyed it as well.