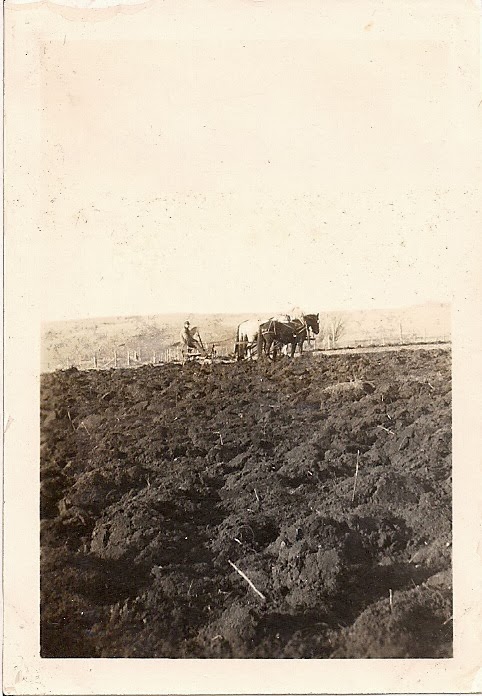 This is how it was done in 1924 - a pair of horses pulling a plow, with the man sitting on the plow seat, holding the horse reins. You can't get a very good idea what the plow looks like here, but I am guessing it is probably what was called a two-bottom plow. That means it had 2 blades that turned over the soil. You can get a little bit of an idea how deep they went.

What is interesting about this picture is that the plowing was taking place on December 22! That is really late in the year for this area of the country as the ground is usually covered in snow by this time, as it is this year. And there is a good possibility that the ground is frozen and impossible to plow, especially without the big machinery of today. 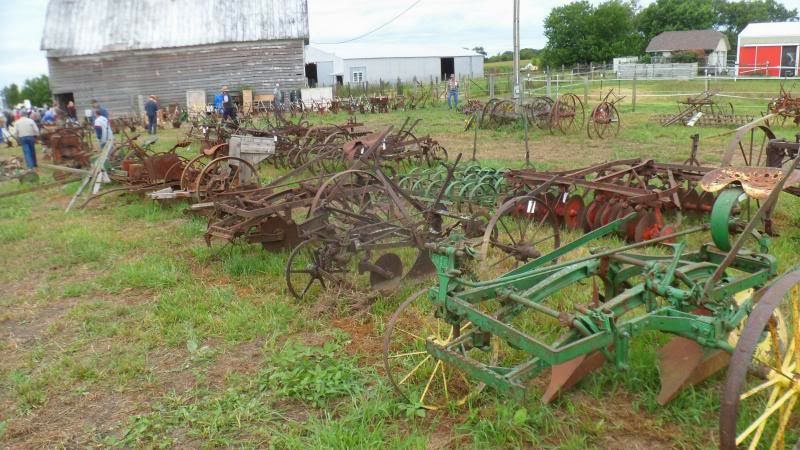 I found this picture of antique plows on the internet. I think the green one in the front row, right side is much like the one the man was using in the first picture. Also the next one to the left of the green one is close. Unfortunately, the seat is just out of the picture. They used the long lever to raise and lower the blades.

I don't think there is much plowing done today, unless they are breaking up new ground. Today most farmers do what is called minimum tillage which helps keep erosion from wind and water to a minimum. They use an implement called a disc. That is what it is made up with - big round, sharp discs that cut into the soil and cuts up the roots of the previous crop, preparing it for the next crop. This will often be done both after harvest in the fall and again in the spring to loosen the soil for planting the seeds. If the man in the picture were alive today, he would marvel at the huge farms and gigantic machinery that is being used today! You can see that the reason farms were small back then. The labor was intensive and slow, and there just wasn't the time or energy to work larger farms.

As farmers started buying more and more land to farm, the machinery had to get bigger and bigger. My dad picked corn with  a two or four-row picker. Today, corn is seldom picked in that way, even with a 10-row picker. Now it is done with a combine that has a corn head on it. I don't know how many rows that handles in one round. The combine not only 'picks' the corn but also shells it at the same time, which would also amaze the farmer in the picture.

I could go on and on about farming, even with my limited knowledge. These are just my observations over the years, of seeing what farmers are doing as I drive by. My basic knowledge comes from growing up on a small farm where my dad used both horses and a tractor for many of my younger years. He quit farming in 1959-60, if my memory serves right.

This is a small glimpse of the actual history of our land.
Posted by Lorita at 11:46 AM