In that box I showed in the previous post, there were three letters. Two of them Mom wrote to Dad, and one was from Dad to Mom, all written about 4 years before they were married. Mom attended what was called Normal School after she graduated from high school, in a town about 35 miles from home. She was home for Christmas and wrote Dad this letter: 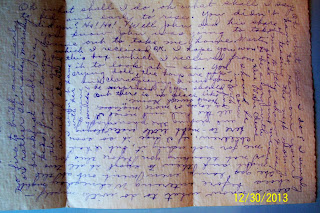 Do you see how it is written? She dated it at the top of the paper, but started the letter on the side, then wrote around each side and continued around to the center! On the back she said, "I hope you don't think I have lost my -- my mind but I'm just full of such foolishness so don't think anything of it." Then closed with:

This has given me a glimpse of what she must have been like as a teenager and young woman. Since she was 34 when I was born, by the time I could remember anything about her, she was close to 40 years old and was 'old' in my young eyes. So by then she had settled down and had been a wife for 10 years, and I don't recall seeing her being anything like this letter.

There was something else in that box that showed me more of what she was like back then. But you will have to wait until next time. . . . .