I made some things for Christmas gifts for the 9 year old twin grandkids - Joseph and Joelle. I didn't want to post them before they got to open the gifts, and since they had a delayed Christmas at home, they just recently opened them.

Joseph had asked me this summer why I never made him an afghan, since I had made one for each of his sisters in other years. I told him he never asked for one, but also, when I had asked my daughter if she thought he would like one, she didn't think he cared about it. He was more into toy cars at the time. I then asked him what color he would like and his most favorite color for everything is orange, and that is what he said. So he got this one for Christmas this year. . . 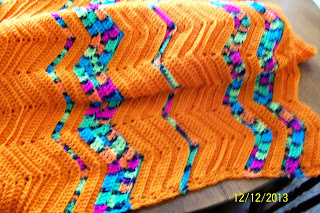 When I bought the orange yarn, I thought an afghan that was totally orange would really be boring, so I found the neon brights/black variegated with the orange almost the exact same shade, and thought that was perfect for a kid. I started with a general ripple pattern done in double crochet, but decided to change it up a little and did some rows in single crochet at random, as well as inserting the variegated colors in random stripes - both random placement and random widths, just to make it a little more interesting. Joseph was tickled pink (no. . orange) when he opened his present. He said, "I told Grandma to make me one, and she did!!"

Early in December my daughter said Joelle would really like a Minion hat and showed me a picture of one, which is a good thing because this old gramma had no idea what a Minion was! But when I saw the picture I realized it was from the movie Despicable Me. I just didn't know they were called Minions as I had not watched the movie.

I was able to find a free pattern online of the very picture she sent me at damnitjanetletscrochet.blogspot.com. There are lots of other cute caps and beanies there. 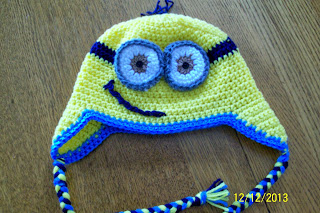 My daughter sent a picture of Joelle wearing the beanie and a huge smile, so she is really happy with it as well. It sure makes grandmas happy to know they made something the kids wanted and then really like them. They are so hard to buy gifts for otherwise, as they have far too many toys and electronics. They really don't need any more but their parents and other grandparents keep buying more for them. Now, what do I do for gifts next year?
Posted by Lorita at 12:30 AM