When I posted the previous story about cat ear notching, I was reminded of a story about one of the stray tomcats that adopted us several years ago.

One Sunday evening as my husband and I walked home from church we saw a beautiful grey point Siamese looking cat walking down the sidewalk, and he followed us to our front door. My husband was an animal lover, as I am, but he was the one that took a saucer of milk out to him because he was hanging out by our door. Naturally, that cat decided this was a good place to stay! Eventually, you guessed it, he came into the house and became our pet (or did we become his?)

He was a really good cat, behaved well inside the house, never clawing furniture, and took immediately to the litter box. He staying in the house quite a bit during the day, but demanded to be let out to roam all night long. This cat was  a very beautiful cat, and I am partial to Siamese. I would doubt that he was purebred, or he would have had a collar and tags, and if he were purebred or not, must have had a family that was missing him. I did advertise he was here since, if he had been my pet, I would want him back. He was just too beautiful and well-behaved to not be someones pet. But no one came forth to claim him, and he became ours. 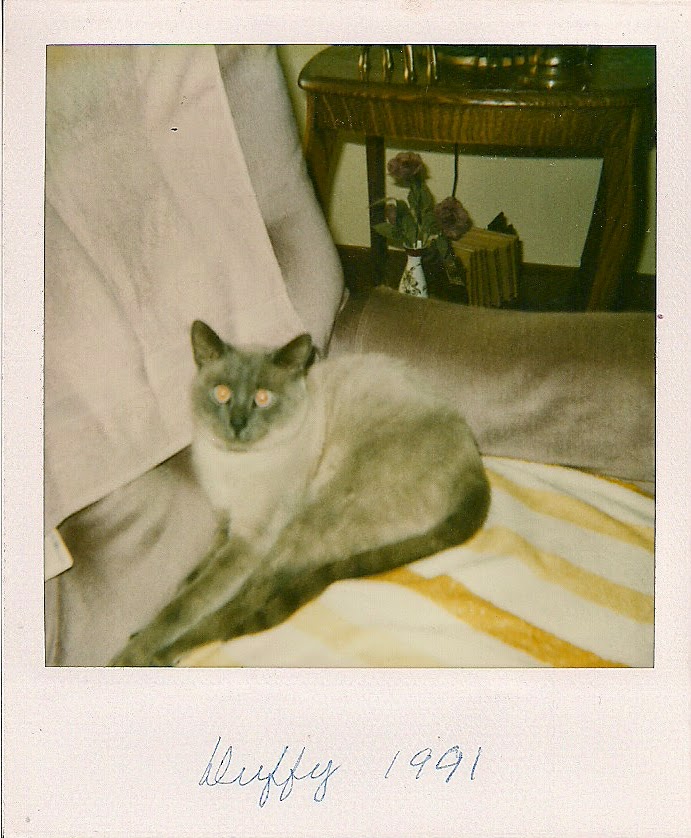 Now, I wanted to take him to be neutered, as males make better house cats if neutered. But my husband refused to let me. I guess that is a male thing? (grin)

Soon there was a white/black spotted female walking through the yard, and sometimes stopping by. Then she had some kittens with her. I would see her around now and then, and with a litter every year. She was semi-friendly and would come up on the back porch and take food from us. She would allow us to pet her, but she refused to be picked up. And her kittens were also very wary and not let us get close enough to touch them, but they knew where there could be food.

It didn't take too long and our Duffy and this female became friendly, and soon she had a litter of kittens again. There were two charcoal grey twins, and some white/black ones. The mama cat and her babies often came to our yard, and they would sit between the house and garage and wait, looking at our back door the whole time. Pretty soon, Duffy would demand to go outside. When he came out the door the little ones would rush to greet him, as if to say, "Hi, Daddy!" He would barely acknowledge them (I know a few men who do the same) and they would all walk off as a family! It was so cute, the aloof father and the adoring wife and kids. I am fairly certain these were his children.

Unfortunately, since my husband would not have him neutered, he would get into fights and come home with some wounds in the morning. As bad as they were a time or two, I am wondering if he grappled with an animal other than another cat, but we will never know. And some time later, he went out one night and never returned. We will never know what happened to him, if he was lying dead along a road or curb somewhere, or been so injured in a fight that he couldn't get back home and never recovered. We were both very sad that he was gone. 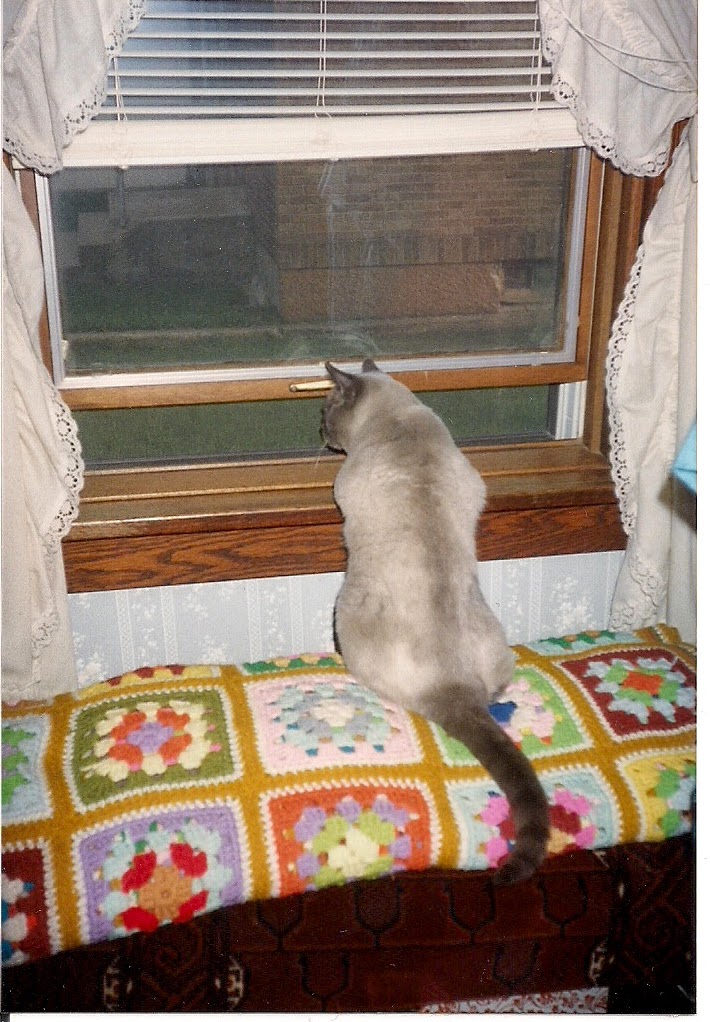 One of Duffy's favorite spots to keep an eye on who and what came through the yard. I wish I had more and better pictures of him.

As the kittens became adults, some quit coming to our yard, but the mother would still come around and want a little attention. I guess she missed him too. But she never fully 'adopted' us. The two charcoal grey ones were here more often, especially one of them. That one was such a Mommy's boy! He kept wanting to nurse even though he was long past being weaned. And he would tag along with her most of the time. He was more affectionate with us as well. His twin brother would come and eat but he kept his distance. The affectionate one eventually became our house cat because that winter he developed pneumonia from the cold weather and I ended up taking him to the vet. And of course, you can't allow a cat with pneumonia go back out into the frigid weather, so it was back to having a litter box in the basement, which he took to immediately. He was ours for awhile, and eventually he did not come home again. After that my husband said no more cats. I think he had a harder time letting go when they didn't come home than I did. But I agreed.
Posted by Lorita at 12:30 AM