Not long ago daughter Lisa saw an afghan on Pinterest and suggested she would like one. I had her order the yarn which was shipped to me and I recently finished it. 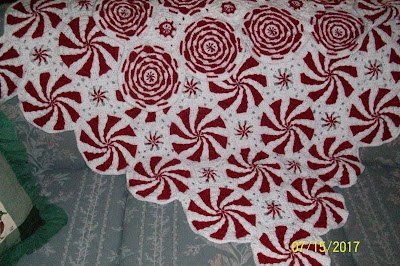 This was an interesting pattern to make and something I had never done before. The written instructions were not making sense to me, and I can usually follow any complex pattern, but I was able to find a YouTube tutorial showing how to do it. After watching that, I found the instructions simple and I don't think they could have been explained any better. It seems there were a lot of other crocheters who did not understand them either so I am not alone.

The back side of the afghan is also interesting and looks totally different from the front. The back side is shown at the top of the picture - the motifs that sort of look like spiderwebs or electric stove top coils in red.

The pattern also has instructions for a pillow that looks like a giant peppermint. I don't have that finished yet as I need to get a pillow form first. That is also done in a very different way than I have done before and I have done a lot of different things in over 60 years. You are never too old to learn new things.

I found the free pattern on the Red Heart website here -- http://www.redheart.com/free-patterns/peppermint-throw-and-pillow if you would like to try it. Once I got that pattern figured out it was quite simple so don't be afraid to try it.

Here is a picture of the sample I made with yarn I had on hand before the ordered yarn arrived. I think this pretty as well. There are many color combinations if you don't want a Christmas blanket. 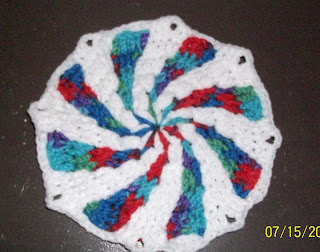 A single motif like this could be used as a potholder or a table pad to set a hot dish on, don't you think? But then I think I would put two together to make it thicker. 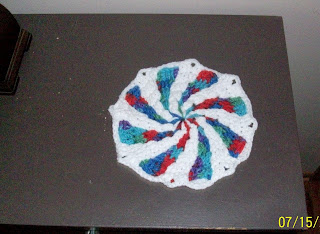