FAITH FRIDAY -- ITS THAT TIME AGAIN 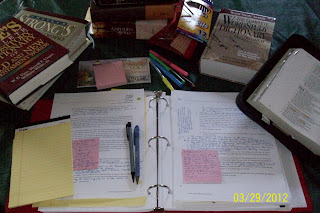 It is time to start working on Bible study for our Friday morning class. We always take the summer off because of vacation schedules, and because we really do need a break.

We will start again some time after Labor Day weekend so it is time for this 'teacher' to get the first lesson ready. I have worked on it for two afternoons this week and still don't have the first lesson finished.

We have been doing a study of the book of Daniel, and finished chapter 6 before our break. Chapter 7 starts to be more difficult to understand because of all the prophetic visions that are in 'code'. Say some prayers for me!

In chapter 6 we find the story of Daniel in the lion's den. This may be familiar to many of you from Sunday School lessons. Recently I ran across a short devotion about this, written by Jennifer Benson Schuldt. At the bottom of the page she writes:


FAITHFULNESS TO GOD INSPIRES OTHERS.

May Daniel's faithfulness inspire you when you feel like you are dealing with the 'lions' in your life.

When I visited a museum in Chicago, I saw one of the original Striding Lions of Babylon. It was a large mural-type image of a winged lion with a ferocious expression. Symbolizing Ishtar, the Babylonian goddess of love and war, the lion was an example of 120 similar lions that would have lined a Babylonian pathway during the years of 605-562 BC.

Historians say that after the Babylonians defeated Jerusalem, the Hebrew captives would have seen these lions during their time in Nebuchadnezzar's kingdom. Historians also say it's likely that some of the Israelites would have believed Ishtar had defeated the God of Israel.

Daniel, one of the Hebrew captives, did not share the doubts that might have troubled some of his fellow Israelites. His view of God and his commitment to God stayed steady. He prayed three times a day -- with his windows open -- even when he knew it would mean entering a den of lions. After God rescued Daniel from the hungry animals, King Darius said, "[Daniel's God] is the living God and he endures forever. . . He rescues and he saves"  (Dan. 6:26-27). Daniel's faithfulness allowed him to influence Babylonian leaders.

Staying faithful to God despite pressure and discouragement can inspire other people to give Him glory. 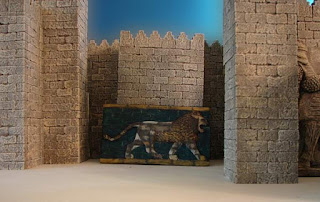 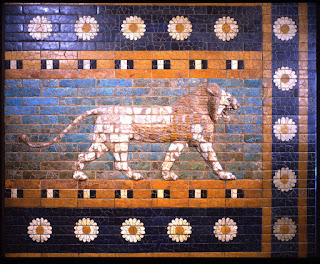 It seems what you see in these pictures are the ones found in Babylon, and were seen by everyone that passed by, including Daniel. I had not heard about these before reading this devotion, so I did a search to find a picture. There is more information about them online if you would like to do a search.