I have been looking through photos trying to find some pictures of the house my husband and I lived in, before I had to move to the small rental I am in now. I am not finding very many so far, but here a couple of the living room. 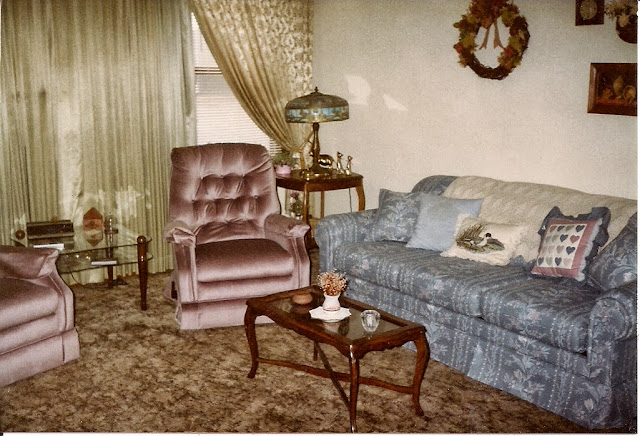 Yes, that is the same couch as I have now. . . still. I love the old Tiffany style lamp in the corner, and the lovely old table it is on. His daughter now has those. I know the lamp is worth quite a bit. I don't know that it is actually Tiffany as it has solid pieces of curved glass behind the metal filigree. But it is old.

I also love the curves of the coffee table. It is one I found years ago at a rummage sale for $5. A one-time friend who collected antiques really wanted that table! I don't remember what she offered me anymore, but I didn't want to get rid of it. It was not real sturdy, and the original glass on the top had been replaced with cheap window glass, but that didn't matter to me. I didn't buy it for the antique factor, but just because I liked it.

The square glass table is one of a set of three tables of different shapes that my husband and his first wife had received as a wedding present over 40 years before I met my husband. A smaller one shaped like a half circle was just to the right of the couch. The third one was taken apart and the pieces wrapped in a blanket in the basement. One of the shelves was broken and they never replaced it, but they kept the parts. I like it because it made the room look bigger since you could see through it. 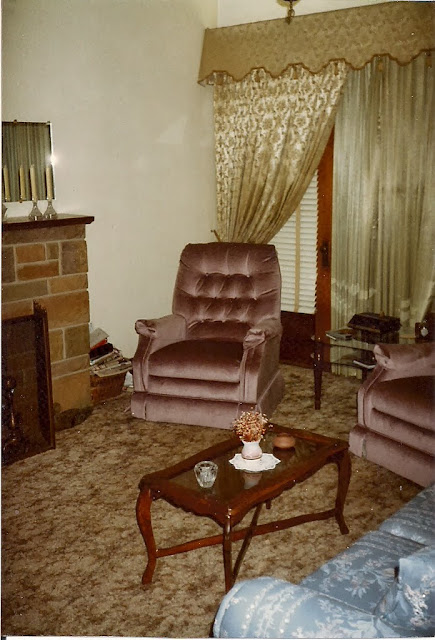 This is the other corner. The custom drapes are quite old but were in pretty good shape except for the valance, which was fabric glued to window shade material and it was starting to curl at the bottom. My husband finally agreed to put new drapes in a few years after we were married. That ended up being the most I have ever paid for curtains/drapes! I will try to find a later picture with the new ones up. When I moved here I had them remade to fit the two windows in the living room here, so I still have them.

That was an interesting way to do the drapes as they covered the whole wall. On the left in this picture is an exterior door with 8 small square windows that go to the bottom of those blinds. The only time it was ever used while I lived there was to move the upright piano in and out again. On the far right was a tall window, and just solid wall in between the two.

Above, the valance is nailed to a plain board shelf which had fluorescent lights shining upward through long holes in that board. It really looked nice when they were lit. It was a dark room with just that door and one window in it, and the opposite wall was dark paneling.

On the left side of the picture is a fireplace. Unfortunately it was fake. It looked real except at the bottom was the carpet.  A real fire doesn't work very well on top of carpet. :) They had a real grate with fake logs and a flickering light behind them so it looked sort of real. My husband said some people would come and sit in the chair beside it and say that it felt nice and warm, as they assumed it was real. I wanted to get a piece of vinyl flooring that looks like stone or brick to put there so that it would look more real but that never got done.

I wish I had aimed the camera just a little higher to show the antique light pendant. You can barely see the bottom of it above the drapes in the bottom picture. There were two hanging from the ceiling.

This house didn't look like much from the outside but it had lots of old charm on the inside. That house was built to stay. As old as it was, there was not a single crack in the plaster walls, and all the real oak woodwork door frames were screwed together, not nailed. They still all hung straight and true. It was really a shame when the building was demolished a few years ago.
Posted by Lorita at 12:30 AM