I saw this recipe on Pinterest recently and actually tried it! This was posted by Lisa at http://thecuttingedgeofordinary.blogspot.com in this post,  She titled it "Cowboy Casserole-that-looks-like-dog-food"! She adapted this recipe from Taste of Home. 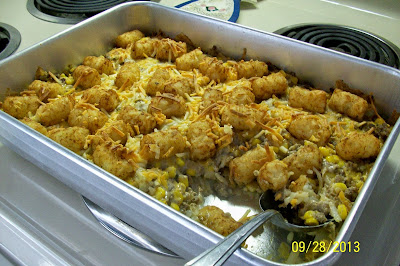 This is how mine looked. Does it look like dog food?

I also adapted mine to fit what I had on hand. I added the changes below the recipe, as well as my comments on the result. It is a hearty dish and good for chilly days. I think it would also go well at pot-lucks. Men and boys always seem to like anything with potatoes and corn in it.

In a large skillet cook the onion until tender and translucent. Add the chopped garlic and cook for 1 minute more. Add the beef and cook over medium heat until no longer pink. Drain the mixture and place into a large bowl and set side.
In a small bowl combine the soup, milk and sour cream. Whisk until smooth. Add to hamburger mixture and stir to combine. Add corn and 1 cup of cheddar cheese. Gently mix to combine.

Notes: I only had 1/2 a bag of tater tots in the freezer, but I also had a bag of shredded hash browns, so I used about 1/2 of the hash browns on the bottom layer. Since I had browned hamburger in 1 pound packages in the freezer, that is all I put in, and I thought it was enough. That also makes the dish a little cheaper to make. Lisa used 80/20 mix and I think mine was 85/15, so I had less fat to drain off which was done before freezing) and more meat.

I don't always stock canned corn but always have bags of frozen corn on hand, so that is what I used, just poured some in, guessing about equal to a can, maybe more. I like corn! I had chopped garlic in a jar that had just enough to equal 3 cloves. Since I was out of fresh milk, I used some powdered milk in 1/2 cup of water. The rest of the ingredients were the same.

Lisa said she allowed the potatoes to thaw first. I did not, plus the corn was still frozen. I did add the frozen hamburger to the pan when I had cooked the onions and garlic so that it was warm. The directions say to bake 25-30 minutes, but it took mine closer to an hour to get the top tater tots browned and crispy. She did mention that the second time she made this she assembled it the night before and put in fridge, then took it out an hour before she baked it so it could come to room temperature a bit. She thought it was better than the first one. In my mind, I am thinking why not have it baking and finished in that hour instead of taking another 1/2 hour or more to bake it? But then, I am the one that always forgets to take things out ahead of time!

I thought this was a little dry and not as creamy as I expected it to be. Using the hash browns might be the reason for that. I also thought it could use more cheese even though it already has 2 cups in it. And the hash browns needed some seasoning, especially salt, and the frozen corn is also salt free. I added seasoned salt and seasoned pepper to my dish and that helped. The tater tots maybe come seasoned? I did not check the bag for that.

All in all, I thought it was good enough to make again, only next time I will use all tater tots. 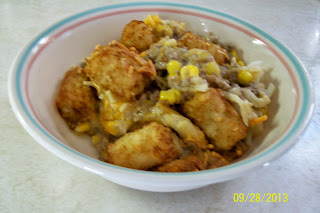