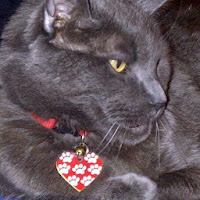 No, not this kind of pet.

My pet peeves have changed over the years, maybe because I have more patience now that I am older. I do have a few currently, however.

I hear so many people, especially celebrities being interviewed on TV. If you do this, please do not be offended. When I hear someone say, 'yahyahyah' when answering a question or replying to what someone else has said, it grates on me like fingers on a blackboard! One 'yah' is enough. In fact, in interviews I would rather hear 'yes'. I do say yah a lot myself because I am lazy, and it is so common. But only one at a time! My husband would tell me there is no such word as yah as he did not seem to like it when I said it. But. . . . in German, Dutch and Norwegian languages, and maybe more, yah or jah is the correct word for yes. He was Dutch and spoke some Dutch, so I don't know why he didn't like to hear it from me. I guess that was his pet peeve.

When my youngest daughter was here the last time, I heard her say yahyahyah severel times as well and I did call her on it in a joking manner, and I told her the reason it bothers me. Of course she said she does that to show her excitement about something. Is this the verbal use of more than one explanation mark? It seems so!!!! 😀

More language that bothers me and I hear from my older daughter is 'and whatnot'. Also grating to my ears. It seems to be used quite often by a lot of people, including celebrities.

One more. I heard the current Bachelorette say this so often during the show and she is not the only one with this habit either. Saying 'I mean' in every other phrase, even when not explaining anything previously stated, is such a bad habit.

Do these phrases bother anyone else?

Do young people even know what fingers on a blackboard means? It seems blackboards have gone out of style in schools. Now they use whiteboards and markers and they all use laptops for everything. One advantage of no blackboards and chalk is that the erasers don't have to be banged together to get rid of the chalk dust. When I was in grade school it was a privilege to be chosen to take the erasers outside to clean them at the end of the school day.

I am also peeved with drivers that pass me in no-pass zones, even when I am going the speed limit, actually 5 mph over speed limit as most people do since they won't issue tickets for that. They are not only risking having a head-on collision, but that will involve me as well. I do not appreciate being put in danger of my life or limb because of their stupidity and lack of patience! People often also pass me just before they make a right turn off the highway, making me brake and take the cruise control off. And if they don't turn off I will pull up right behind them at the next stop sign or stop light. So we both got to the same point at the same time and passing me did not accomplish anything other than irritate me.

I think I am done ranting for today. Thanks for letting me get this off of my chest.
Posted by Lorita at 9:26 AM