A Show of Patriotism

I thought you might like to see this mural along with an explanation as to what it means for me. The wall is the side of the local American Legion building. The right maybe 1/3 of the wall is where our double garage used to stand. Our house and yard was where the new building with the two garage doors is now located. That new building is now an insurance office. I don't know who had the mural painted, but I am guessing it was the insurance company rather than the Legion, but I don't know. I was really surprised when I happened to drive by there awhile back and saw that. I kept forgetting to bring my camera along when I went downtown so it has been there for awhile. 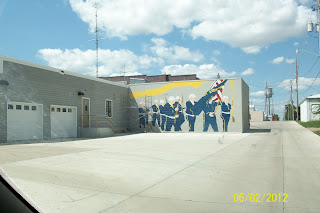 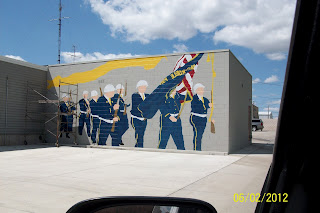 This is so fitting for the wall of the American Legion, first of all. But it is also special in another way for me. Not only did we live next to the Legion, but my husband was a long time member there. And he loved it, and was very proud of his service during WWII. And while we were married he became the custodian when the older vet who had been doing it retired. It was a natural fit since we lived next door. Didn't have to go far! He also made sure the coffee pot was set up in the evenings so that there would be coffee ready for the vets early in the mornings. There were quite a few that went there for coffee before they went on to work for the day. I am really surprised that the local newspaper didn't print a picture and story about it, and disappointed as well. I don't know that whoever commissioned the painting considered it as a special honor specifically to my husband, but I think of it in that way. I know he would be very proud to see it there.

I might mention that the alley is now paved. It was gravel the whole time we lived there, I was there for 16 years and my husband had lived there ever since he got out of the Army, and that was around 60 years at the time of his death I think. It would have been really nice if it had been paved all those years we were there, as that alley got a lot of traffic so was always raising the dust.
Posted by Lorita at 6:34 PM