Skeletons in the Closet!

Yes, I am baring my hidden secrets! This is embarrassing!
I am trying to make my pantry better organized and easier to use. I have been thinking about this for awhile but couldn't seem to get started. For some reason the 'bug' bit me this morning, and I opened those doors and started pulling things off the shelves. I actually forgot to take pictures before I started, which I had planned to do. So these pictures were taken in the middle of the operation. 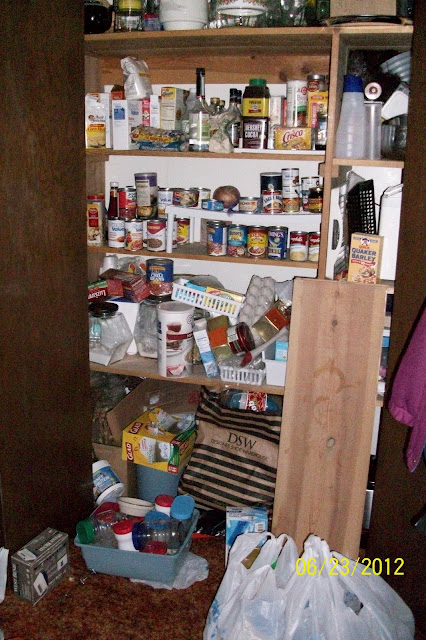 This is the long shot to show all the stuff sitting on the floor. What is in the bags are the cans of food that I recently bought and never put on the shelf as there was no room. In the blue tub are most of the empty plastic containers that I have been saving to store things that come in bags and boxes so that critters don't get into them, though I have not had any problems with that as yet. But those containers have just been tossed in wherever I find a spot, and when I need one I can't find one I want. My plan is to put them all in a box on the floor so that they don't take up valuable space needed for canned goods. The boards to the right are the front part of the shelves that I have already removed. Peeking out from the right of those boards is the other half of the pantry, and that is where all the small appliances and large pans plus all the other stuff that does not fit in the kitchen has to be stored. And that is full too. I had done some decluttering in there not long ago, but I am not satisfied with it yet. So will have to work on that again soon. Right now, the food pantry is taking awhile since my body is still hurting from lawn mowing two days ago, and I have to sit quite often.
﻿ Remember, I had already started when these pictures were taken so things are even more jumbled than they were to begin with. I really did have it somewhat organized before. I don't have the canned goods organized as to category yet, but had just moved them so that I could get the front of the shelf removed.
Look how that plastic shelf sags! I think it was originally bought for shoes in the bedroom closet before I moved here. Not really sturdy enough for heavy cans. My plan now is to just put the little cans of odd stuff there, like black olives, jalapeno peppers, tune, etc.-- the ones that tend to get lost among the taller cans. The egg carton is empty. I was saving it for starting garden seeds next spring but now I don't think that is going to happen so the carton will go in the recycle bin when I get to it. 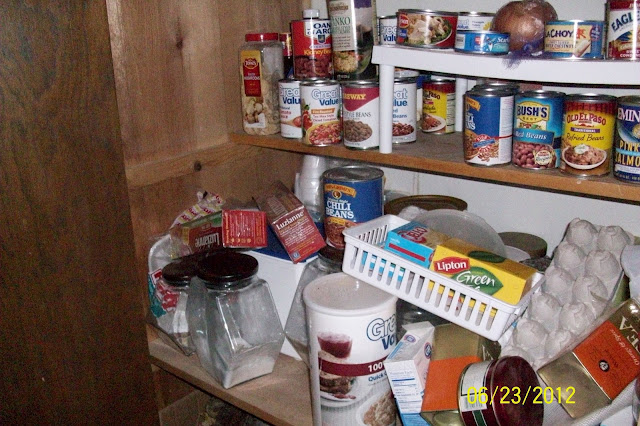 This angle shows better how deep those shelves are as the bottom one still has the front board in place. I am going to remove that one, too, and see how that will work. But I am afraid I will just run out of room for everything so may have to leave it there. You can see in the top picture that there is another shelf above the one That has the boxes and bottles. I cannot remove the front half of that one. There there is another narrow shelf way above that one yet. It is impossible to get things from there without using a step stool or small ladder so it has things I never use up there. But then, the question is, if I never use them, why do I have them? Maybe I would use them if I had easier access. Know what I mean? For me, if something is hard to get at, I just don't bother.

Once I get it arranged to my liking I will post another picture of the finished food pantry.
Posted by Lorita at 3:20 PM