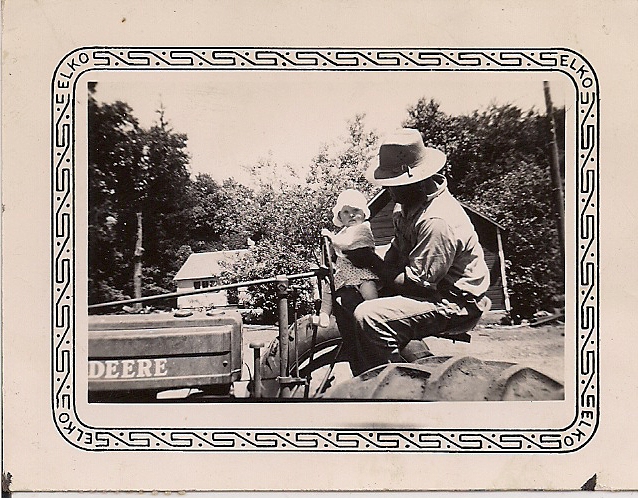 I started farming at a very young age! Here I am with my dad on the only tractor he ever farmed with.  I think it is a 1939 or 1940 John Deere B. I was told that Dad would take me out in the field with him and I would fall asleep with my head bobbing against the steering wheel. I guess he did that so Mom could get things done, or maybe she had to get groceries or had a Ladies' Aid meeting at church. When I got a little bit older I started helping in the field with the work horses, Daisy and Queen.
No, not really. I never learned how to work with the horses. I don't even know what this machine did. Maybe it is a cultivator?  I have several pictures where I posed on the tractor at various ages. I did learn to drive the tractor and helped Dad quite often with some of the field work as I got older. I often sat in the oats wagon when he planted oats, and made sure the hopper stayed full. And later, when a little older, I drove the tractor while Dad was on the oats binder at harvest time. This was the machine that made the bundles of oats, and it was called a binder because it formed the bundle and then bound it with twine. My dad had to operate all the levers to make it do its job. Nothing like the machines of today.
After all the oats was bundled, we walked the field and set 6 bundles on end and laid a seventh one across the top. This was done to aid in drying the oats before it could be threshed. I did learn how to set them up and did a pretty good job. I thought it was fun except for the straw stubble we had to walk on and scratched the legs.

Oat Bundles in Shocks stacked by Amish farmers.
Later, on threshing day, we walked the field with pitch forks, and using the fork we tossed the bundles into a hay wagon, or we called a hayrack. That was the kind of wagon that was used for hay rides too. It was basically a flatbed wagon with a high back and low sides that were not solid. A bit hard to explain.

This is a little bit like the wagons Dad had. His also had boards on the sides that were lower than the back and front, but open like the back and front on this one. And the sides sort of formed a triangle with the front/back. You can sort of see that in the picture below on the wagon on the right side of picture.

Someone would pitch the bundles, one by one onto the belt that took it into the machine (far left). The grain came out of a large 'spout' over the grain wagon (probably behind that pickup in picture). It was always my job to sit in the grain wagon again, and level the oats as it was augured in. Threshing time was always during the heat and humidity of the summer so I was all sweaty, and the oat chaff would stick all over me. Oh, that was so prickly and itchy! The straw was blown out the other side (right side, large, long tube where straw can be seen blowing out the end), forming a straw pile. The cows would eat from that during the winter. Straw was also used as bedding in the barn. You can see in the picture that it took quite a few men to get the job done, and that is why farmers formed threshing rings. Several got together and bought a machine, then they went to each farm in the ring, taking the threshing machine with them, and doing the harvesting as a group. My dad was the last one in his ring to continue threshing so he had to buy out the other farmers. Then my mom's brother-in-law from Illinois would come every year to help as he loved the job. And some of Dad's brothers or older nephews helped too, while I tended the grain wagon.

Here is a link that tells about a threshing demonstration done 3 years ago near Cherokee, Iowa, a town where we lived for 7 years in the mid '60s.
http://www.chronicletimes.com/story/1650424.html
﻿
Posted by Lorita at 12:30 AM