This 'n' That - Candy Parade

Our small town is home to The Foreign Candy Company. They import candies from all over the world, and then sell to stores like Walmart and many others, including smaller gift/tourist shops all over America. If you have ever bought Black Forest Gummy Bears, Warheads, bubble gum by the yard (looks like a yard stick) Toblerone chocolate bars, and the white Dutch Wilhelmina mints, you have had candy that has 'Foreign Candy Company, Hull, IA' written on the back of the package. Check it out sometime.

The owner of this company has been a big benefactor to many of the town projects by helping fund the new swimming pool that was built last year, getting 2 new industrial parks started so that he could build his business there, and in many other ways.

Each summer the town has a SummerFest event including a parade - advertised as the 'Best Candy Parade' around. It just so happened that my daughter and 8 year old twins came to visit the day of the parade, so of course we HAD to go, at least for the kids. We even made a stop at the Foreign Candy Outlet Store to buy some favorites before the parade.

The parade isn't so grand - not many floats, no bands (because it is summer) but there were 2 drum lines that marched, the town queen and Little Miss on a float, and lots of farm machinery, semis, fire department vehicles. Each one is tossing out lots and lots of candy. Plus every business has a pickup or cart and employees tossing candy, t-shirts, small balls, Frisbees, canvas bags, bottles of cold water. One lady who has a floral shop walked down the street with a flower cart and handed out single carnations. She knows me and walked over to where I was sitting and personally handed me one! She is the sweetest!

Needless to say, there were lots and lots of kids lining the parade route, and they all made a huge haul of candy. 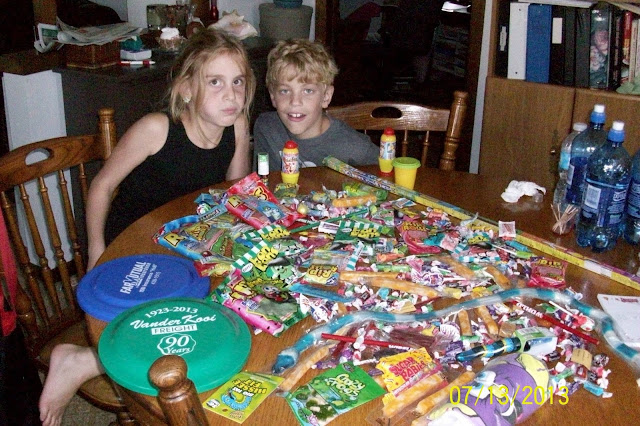 The twins and their parade haul. I don't know why they were making such goofy faces. LOL  This should last them until Halloween (maybe). They did share some with Grandma - the ones they don't really like.
Posted by Lorita at 12:30 AM