Did you go to your prom? I went to both of mine. I didn't have a date for the first one as a junior, but did have one for the second one as a senior. He turned out to be my first husband and we were married on September 2 of that same year. But that is another story.

Today I am writing about proms since this is the time of year when they usually happen. I know the local schools are having them about now. There was always a lot of excitement and expectation connected to prom. There would be a theme to decide on, and then figuring out how to decorate to fit the theme. It was custom when I was in high school to have the banquet, and then the dates could come for the dance if they were not juniors and seniors in the same school. There would always be a decorated set for having pictures taken with your date.

When the dance was over most of us would go to a bigger town 16 miles away where there was a big movie theater. They would be open just for us since we wouldn't get there until well past midnight. If there was a cafe open after the movie, some of us would go out for breakfast. Back in those days there were not many places that were open 24 hours as you can find today. I think some would congregate at someones home for breakfast, until dawn. If you were lucky you could then go to bed and sleep for the rest of the day.

Today in many of the local towns, the parents of the junior/senior class members, and other interested people and businesses, will set up an after prom party where the kids play games and there are donated prizes, more food, and lots of fun. That way the teens don't have to drive out of town when they are overly tired.

This is all leading up to the main reason I write about proms. I found the programs for the two proms my mother went to in 1926 and 1927! They don't give the themes for the prom, but the titles in the program are interesting! The menus are a bit different than what I think you will find today as well. I doubt that they were catered affairs. I am guessing that either the junior class prepared the meal, or maybe their parents?

This is the cover of the prom for Mom's junior year. i can see the junior girls sitting at a table, cutting the papers to size, and printing "MENU" on th front of each. The pencil guide is still faintly visible, and then filled in by hand with green ink. Then someone had to punch holes, thread in the ribbon and tie the bow. 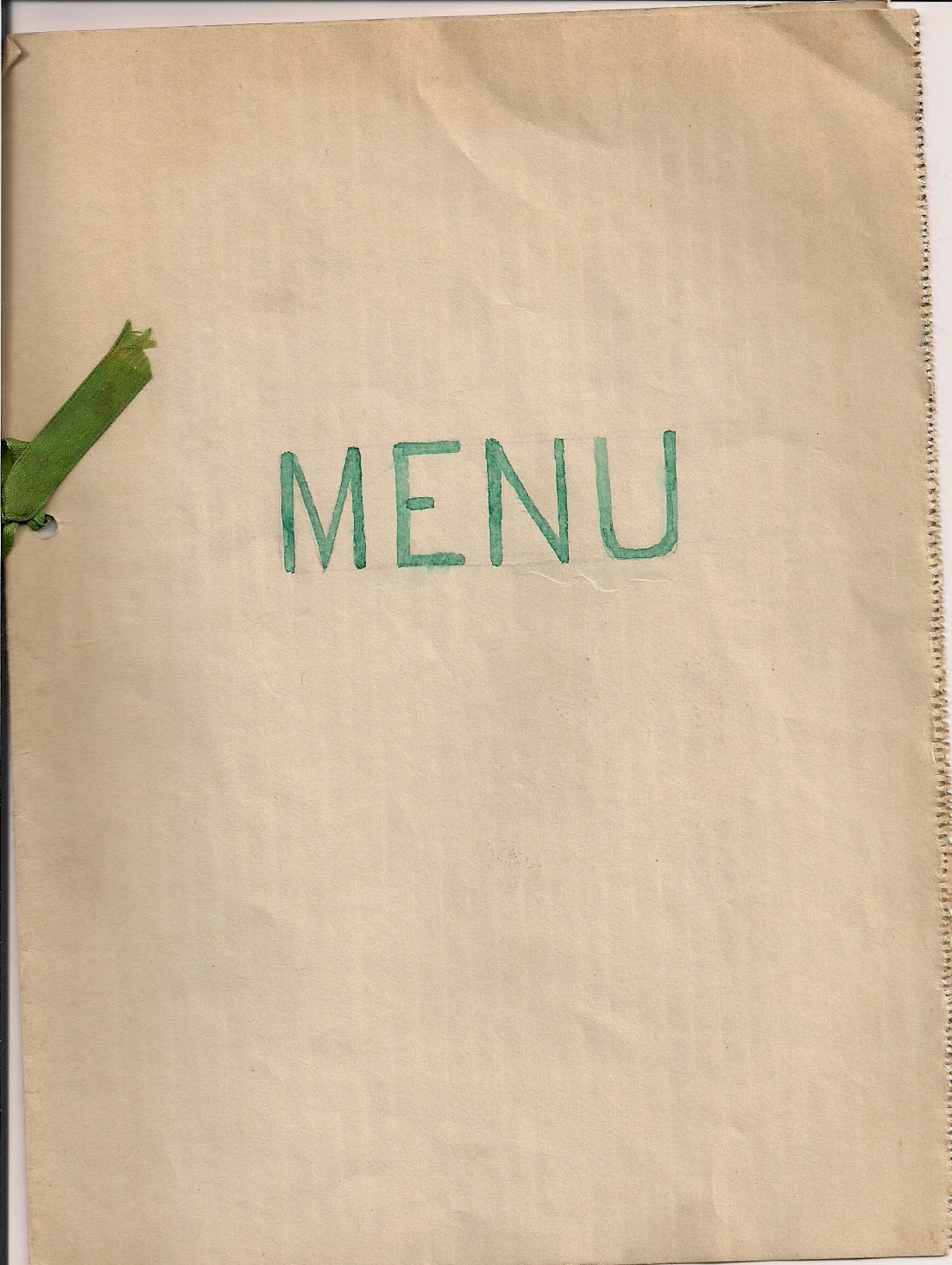 I like their class motto. "We will find a path or make one." 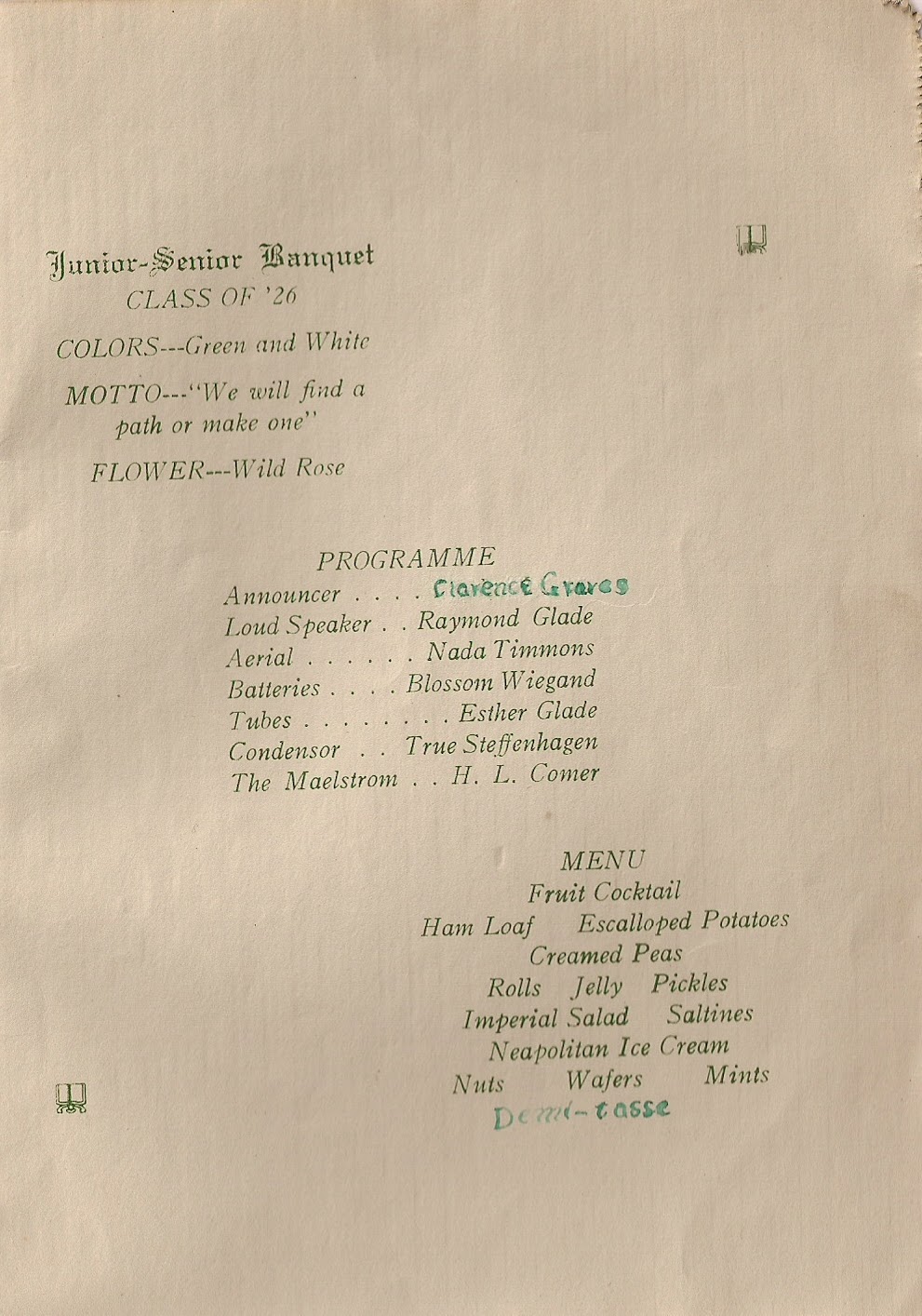 It seems their theme must have had something to do with a radio according to the program. Was that a skit?

I looked up the definition of a maelstrom ~~

A maelstrom is a very powerful whirlpool; a large, swirling body of water. A free vortex, it has considerable downdraft.

a situation in which there are a lot of confused activities, emotions, etc

a restless, disordered, or tumultuous state of affairs

Doesn't that make you wonder what was happening? "The Maelstrom" seems to be one person, so what was he doing? Was he doing some hyperactive activities?Was he whirling and twirling and creating a vortex around the other people who represented a radio? Inquiring minds want to know! I am guessing it was very entertaining!

How about that menu? It sounds like any meal one might have had at home and certainly nothing fancy - except for the Demi-tasse. Does anyone know what the Imperial Salad was like? When I googled that I got a huge variety of salads, and some sounded very gourmet. But the ones that sounded like they would fit this menu in that day and age, in a small farming community, I found here --
http://blogs.knoxnews.com/constantine/2008/06/imperial-salad-2-versions.html

The first one is made up of cabbage, carrots, radishes, celery, green pepper and mayo. The vegetables are ground together (though chopped and shredded sound better to me) with the option of boiled ham added.

I am sure the group had a great time.

Then there is the program for Mom's senior prom ~~