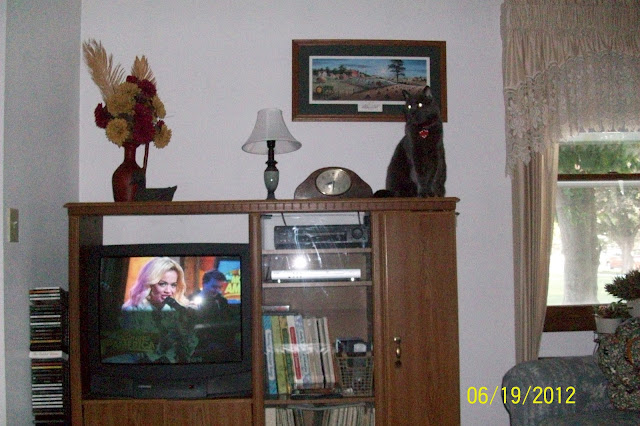 Do you see what is on top of the entertainment center? 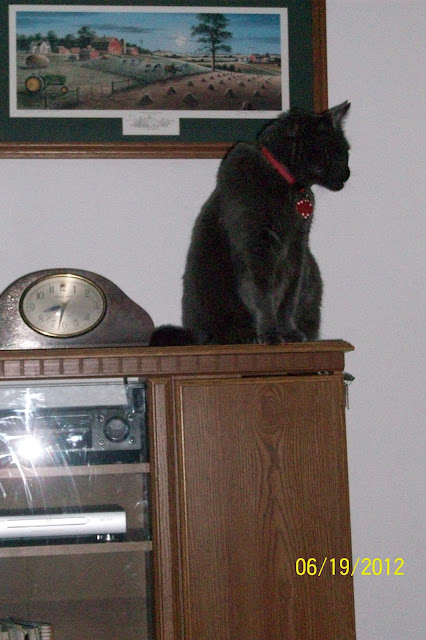 The King, watching over his realm.

He usually doesn't sit up there, but once in awhile I guess he needs a change of scenery. Usually he lays on top of the old upright piano on the other side of the room.

I really should remove that fall flower arrangement in the rustic pitcher, don'tcha think? Add that to my long list of things I should be doing. The mantle clock belonged to my parents. It used to chime. It is an electric clock. The picture above of the farm scene is a print of a painting done by a former minister of ours. He started as a graphic artist, then became a minister, and he was a very good one. But several years ago he decided to leave the ministry (after we had moved away) and there are only two reasons I can think why. He got a divorce a remarried another woman that had been married. Don't know the story but can only guess. I am thinking the denomination had a problem with what went on. Or, he just decided to spend more time on his love of painting. He has made a name for himself with his duck and other hunted bird paintings. His name - Jerry Raedeke. My kids gave me this print for Christmas one year, and Jerry did a remark at the bottom so it is special. Also, I wanted this print because the picture resembles the farm where I grew up. And my dad had the very same John Deere tractor. The field on the right is an oat field with the shocks set up. I put many of those together too, and I think I could still do it after all these years. Oat harvest was a highlight of the summer. Not exactly fun because the straw was scratchy and the chaff stuck to you like glue because it was hot and humid and everyone was 'damp with dew' - so to speak. My main job with threshing was to keep the grain wagon level as it filled. Ah, the memories.
Posted by Lorita at 4:43 PM