Guess what? As I was digging around in my closet I found another bag with some yarn! Actually, when I looked in it, it was a bag I had set aside because it had some granny squares in two colors and some skeins of yarn to match. When I was given this among a bag of other yarn, I thought I would continue making the squares and make something with them to put on the church auction, since it was a church member that gave them to me. 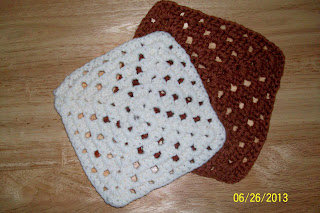 But as I was looking them over the other day, I realized that was not going to happen. Look at the next picture closely. 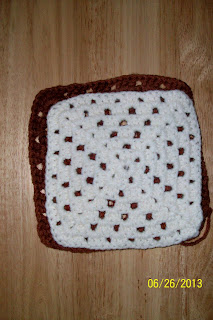 See the difference in size? They weren't all this bad. Most of the white ones were close to the same size, but the brown ones were different. Some were the same size as the white, some only slightly larger, and then a few like the one above. There is just no way I can put these all together into one afghan or table runner. So. . . . . take them apart and knit more caps. As I was unraveling them, I found that the majority were done left handed, which is great since I am also, and so they would have matched up quite well. But there were a few that were done right handed! So there had to be more than one person making them, right? This just shows that stitch gauge is important, especially for things like this. The size doesn't matter as much as it does for clothing, but these do have to be uniform in size in order to fit together. Now I have about 10-12 brown and white caps to add to the 120 I already had. I suppose I could have re-stitched each square to get them the same size, but making the caps was faster as I didn't have to sew all the squares together at the end.

I am wondering if this original project is just another UFO that someone decided she was not ever going to finish it, or if she just got discouraged because the squares weren't all the same size?
Posted by Lorita at 12:30 AM