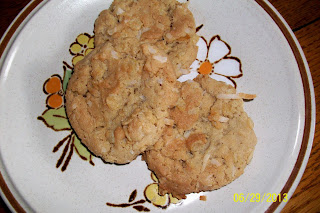 It is impossible to show you how good these cookies taste. Let's just say, you can't eat just one. At least I can't, but then I am a sugarholic. This is one of my favorites.
Now I don't necessarily like making cookies. I would rather make bars because the bars take a lot less time. Cookies are what I call 'putzy' baking. But I do love to eat homemade cookies. And I think I have solved my problem with making them. Make the dough, form into balls, and FREEZE them before baking! Call me a slow learner. I discovered this after joining an internet group of frugal women who do a lot of cooking and baking, plus reading several blogs. Isn't the internet wonderful? In fact, the day I made these cookies, my friend Rhonda, over at if you do stuff. . . stuff gets done posted about her cookie baking too.
Since it is hard for me to stand very long at one time, I can mix up the dough and make the balls all while sitting at the table. I did have to use my hand mixer, which isn't quite as efficient as the stand mixer, but it works, and much easier than dragging the heavy mixer out, plus the rheostat (or whatever it is called) seems to be going out as it doesn't keep the speed regular. All of a sudden it will take off like lightning, and then slow way up, or somewhere in between. That makes using a bit tricky! Can I say the mixer is old?
I put the balls of dough on cookie sheets and put them in the freezer until frozen, and then transfer to some square ice cream pails that I have. They fit in the freezer better than the round ones. If you are wondering where to get the square ones, Walmart sells a line of ice cream in them and is cheaper than the other brand in pails. I didn't want to use plastic bags for these as I can see them getting squished and broken with other stuff on top of them, even if they are frozen.
Now, when I want a cookie I can take a few out and bake in the toaster oven. The tray that came with the oven holds 4 cookies at a time. In the summer the toaster oven is nice as it doesn't heat up the house as much. It also uses less power than the big oven. I really hate to turn the big one on to make just a couple of little things, and it takes longer to preheat as well, so lots of electricity being used in the process. And this way, I am not tied to the kitchen while all the cookies bake, one cookie sheet after another. That can take 1/2 a day. And then I have all those cookies cooling on the table, too, and who can walk past without grabbing one or two each time? Not me.
Now for the recipe. My recipe calls them Ranger Cookies. In some of the other church cookbooks I have, very similar recipes are called Crisp Cookies, Krispie Cookies, Everyday Cookies. These are crisp cookies. And they can be called Krispie Cookies because they have Rice Krispies in them. 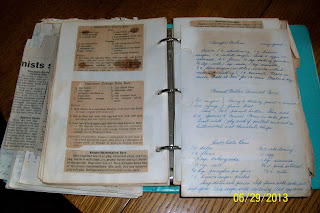 This is an old recipe that has been around for decades. The one I used came from the book above. Don't you think it looks well used and old? I had also written in the top right corner "Very Good" to remind me that this recipe has been tried and approved. I don't remember what year I started this book, but am thinking it was in the early 1960's, maybe even late 50's. My mom had one similar to it before I got married, so daughter does as mother does.
RANGER COOKIES
Cream:
1 cup shortening
1 cup brown sugar
1 cup white sugar
Add:
2 eggs
1 cup oatmeal
2 cups flour
1/2 teaspoon baking powder
1/2 teaspoon salt
1 teaspoon baking soda
1 teaspoon vanilla
2 cups Rice Krispies (or other cereals which need to be used up)
1 cup coconut
Mold into balls. Bake at 350 F. degrees for 12 minutes. Makes 6 dozen.
Some of the other similar recipes added raisins, chocolate or butterscotch chips or nuts. This is a good recipe for using up a little of this and a little of that, or whatever you have on hand. But the cereal, oatmeal and coconut are must-haves as far as I am concerned.
﻿ 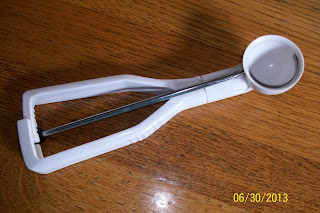 This is one of my favorite tools for cookie making. It makes a nice size cookie and all are the same size. It is easier to use than two teaspoons. I also have a larger one that makes Monster Cookies, or either can be used to make meat balls.
Happy baking!﻿
Posted by Lorita at 12:30 AM