In the last post I showed you page 9 of the account book, which was all expenses.  Several lines down it seems a new year - 1934 - is being recorded. And most of those entries were related to the farm and not the household, so it looks like they had most things they needed for the house.

This next page is the last page of expenses and ended in April. I wonder why they stopped recording expenses after April? 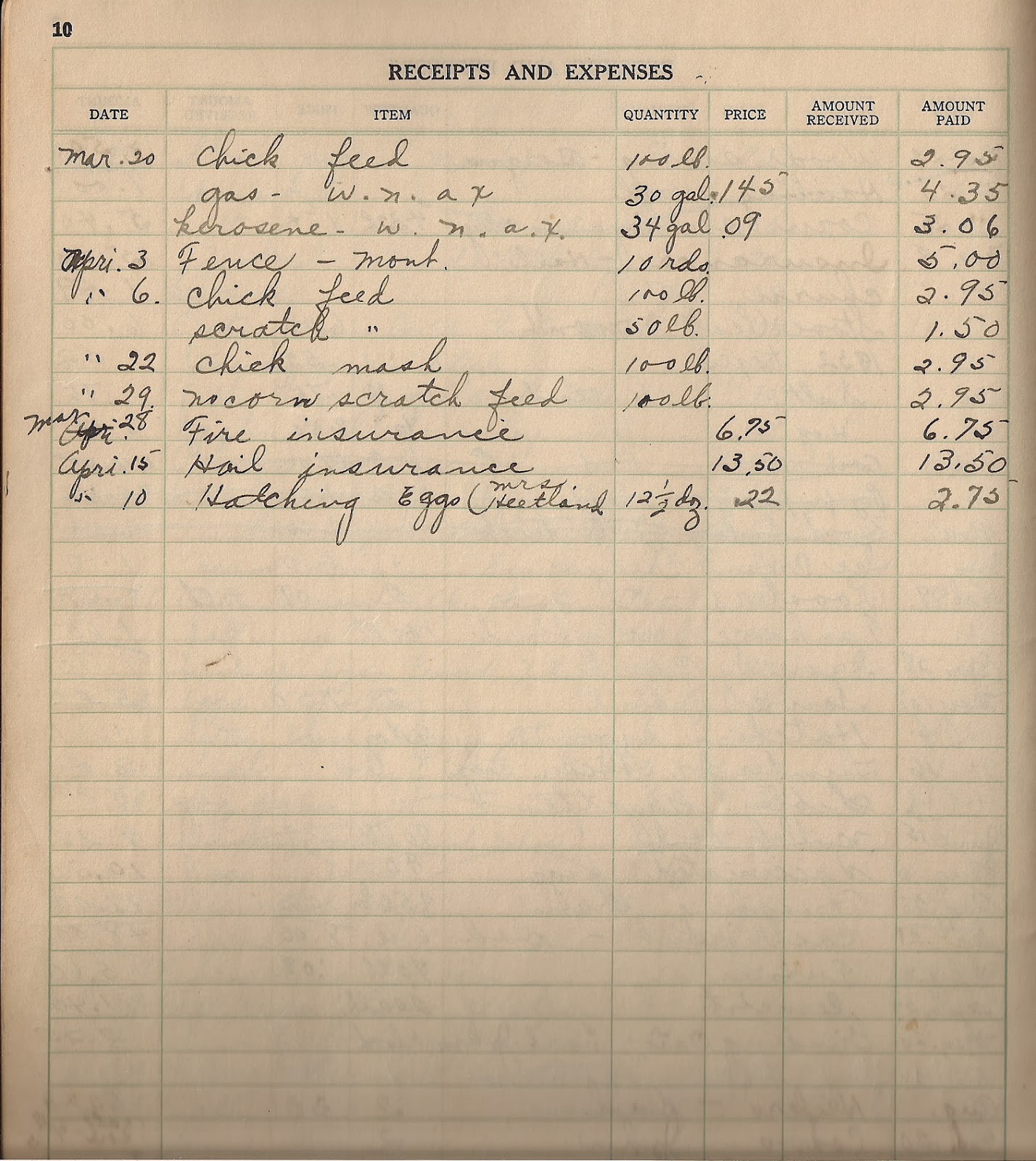 Some things to note here - gas - 30 gallons for a total of $4.35. We have paid almost that much for one gallon of gas a few months ago, and is still over $3 a gallon. I don't know what the "w.n.a.x" means. That is the call letters from a very popular radio station years ago, but I don't see a connection between buying gas and a radio station.

Farmers, you may want to note the cost of chicken feed. That would be "chicken feed" compared to today's prices for feed. (pun intended).

After several blank pages there are several pages of receipts like the one below. 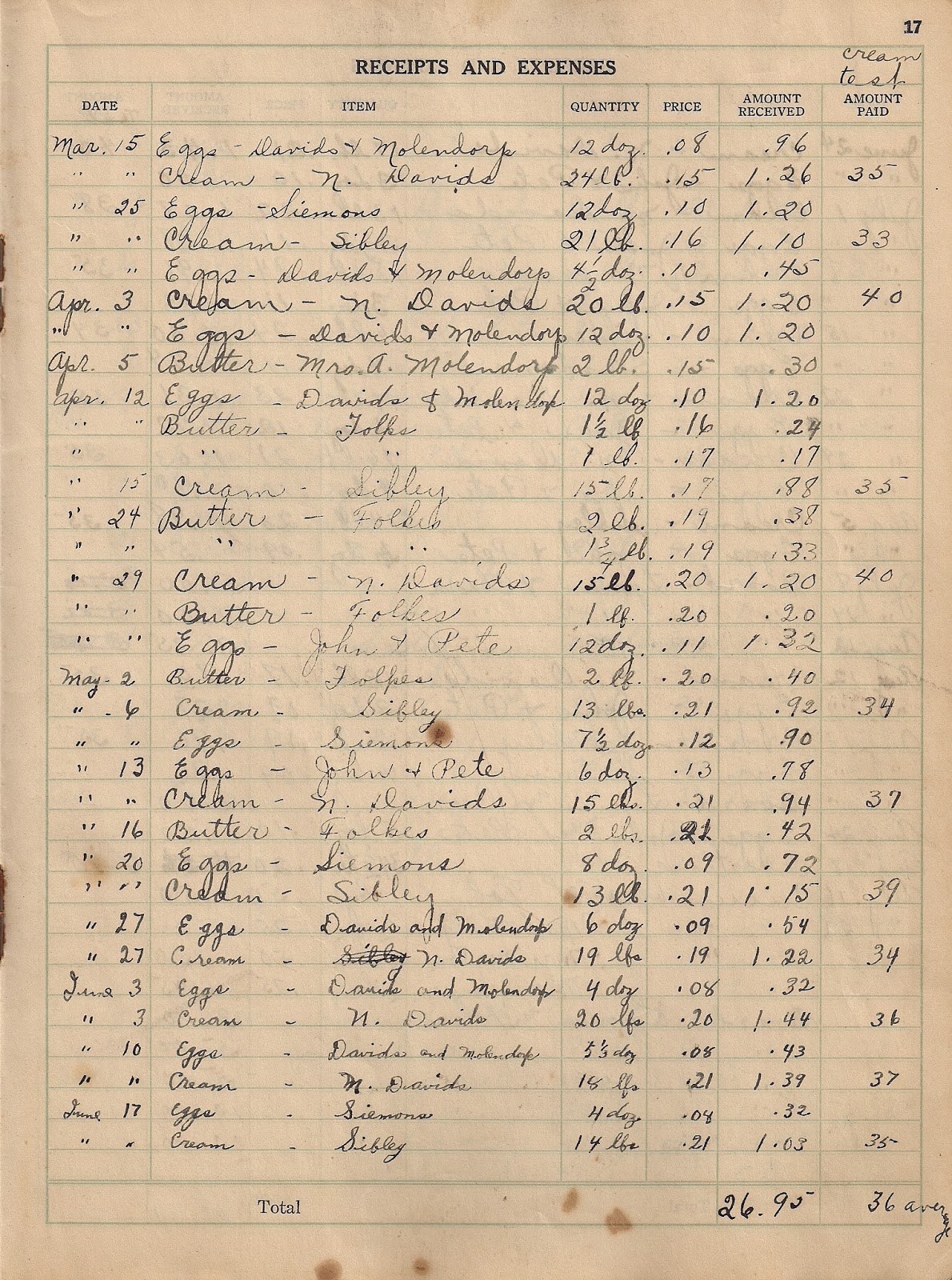 This is a record of all the eggs and cream they sold. The first entry - eggs - sold 12 dozen eggs @ 8 cents = 96 cents. I think I paid $1.89 for 1 dozen eggs in the store a week ago! Of course, they had been candled and sorted by size before they got to the store, and the ones Mom sold were not, thought they had probably been washed. What do I mean by candling? You can read about it here.

One of my chores growing up was gathering eggs and sometimes helping wash them. I hated both jobs! Even though I grew up on a farm, I was not a farmer. I like country living, but don't make me raise chickens please! Gathering eggs sounds simple enough, but sometimes hens would still be on the nest and they did not like a hand reaching under them to take their eggs, so they would peck. That hurt! And sometimes a hen would break an egg in the nest which then went all over the other eggs there. yuck!

Once those eggs were washed, they were put into large corrugated cardboard egg crates that held several dozen eggs, with paper pulp dividers, called flats, to hold each egg, similar to the bottom of egg cartons today. I think those crates must have held 12 dozen since I see that was usually the maximum listed. That is one thing I don't remember anymore. I tried to find a picture online but most were wooden crates or the small boxes a dozen eggs come in today.

One thing I have appreciated in looking at this book is that I have handwriting examples from both Mom and Dad. It is not hard to tell the difference. Mom's writing is that of a teacher, neat and larger. Dad's is cramped and small but readable.

On some of the next pages of receipts I see where Mom's sister and husband paid my parents for room and board several times. That tells me they stayed with my parents for awhile. They got married February 13, 1933, and the first note of paying room and board is July 8. This is during the Depression so maybe they could no longer pay rent because of losing a job. It seems like they paid any amount they could whenever they had some money, since the dates and amounts are irregular. And that was most likely to help pay for food more than anything else.

The other source of regular income was selling cream. I don't know why the milk wasn't sold too, and I don't even know what was done with the milk. Some of it might have been given to the hogs, and we did use some for drinking and cooking. Yes, raw milk, never pasteurized! And we lived to tell about it.

I just found the following online, telling why only cream was sold and how it was separated from the whole milk.

In the late 1800's milk fat or cream was the main reason for milking cows.  Cream contained most of the energy of the milk and was used to make butter.  Butter also was less perishable than fluid milk.  The separated skim milk was commonly used to feed livestock.  Thus before one could make butter the cream needed to be concentrated or separated from the milk.

Here is a picture of one something like what I remember. The one Dad had was electric but older ones were cranked by hand since people didn't have electricity for a long time. This is what they call a centrifugal separator. That big bowl held the milk and then it would spin, which caused the cream to separate, then the cream came out one spout and the skim milk out of the other one. 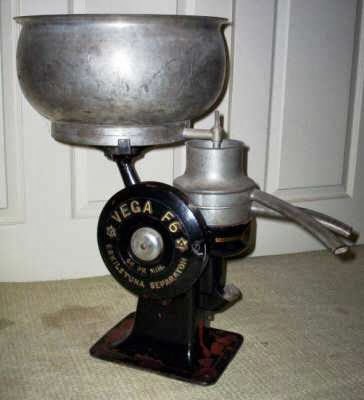 You can read more about cream separators and the different kinds of separators here.

Then the cream was put in a cream can. Dad's were like the large one, far left in back row. I still have one that came from our farm sitting on my patio. 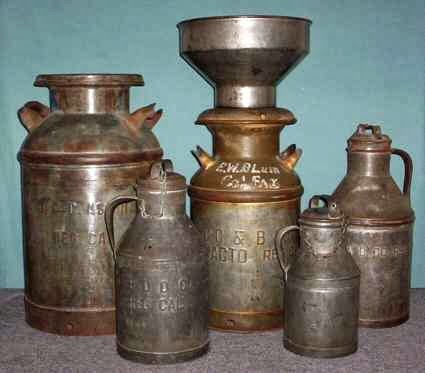