A Piece of History


I found this little piece of paper (approx 3x5 1/2"), with a few fold creases, to be quite interesting. This is an introduction card issued by the National Reemployment Service, introducing my dad in 1933, to someone who had asked for some help. I will let you read what the card says. 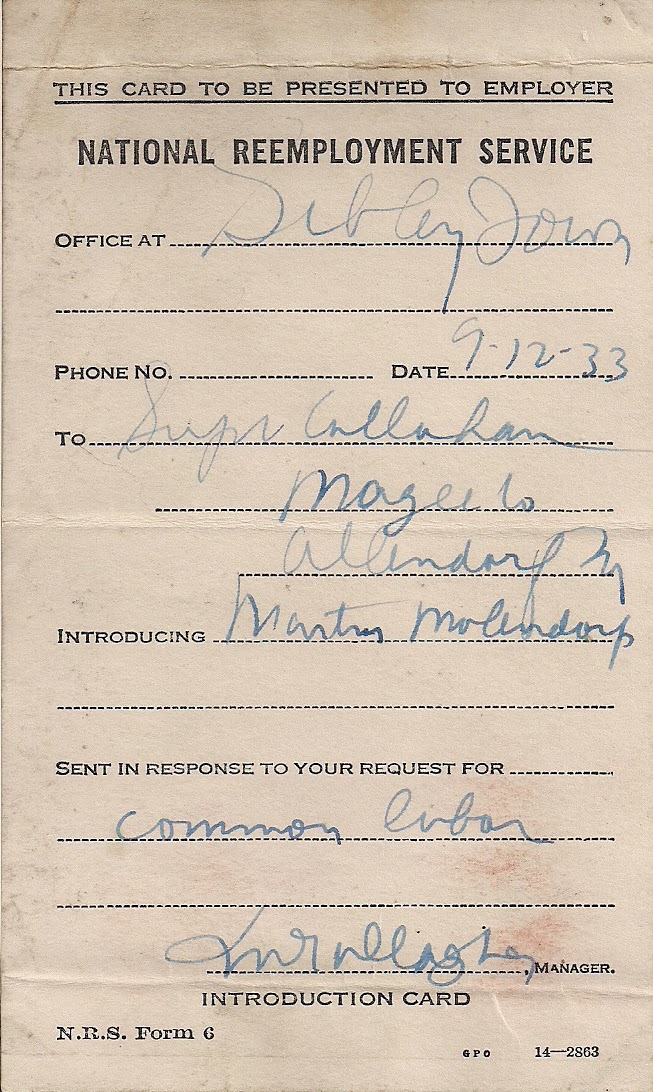 
The Wagner-Peyser Act came out of another period of high unemployment – the Great Depression. In the early 1930s, the need to develop a system in which unemployed workers could find and connect with employers looking to hire became increasingly important. With the support of Secretary of Labor Frances Perkins, President Franklin D. Roosevelt signed the act into law on June 6, 1933, establishing a nationwide system of public employment offices known as the Employment Service.
For the past years 80 years, the act has funded employment services that have helped millions of job seekers, Unemployment Insurance recipients, veterans, migrant and seasonal farmworkers, and people with disabilities find work – and businesses find a qualified workforce – throughout the country.
Today, as the nation recovers from the Great Recession, the act continues to serves a vital tool to help the unemployed get back into the workforce.
I am not sure what my dad did for work before then.  In September 1933 my parents had only been married 1 year, 7 months. I don't know if he was farming yet. I do know at one time he worked for a company that ran a gravel pit. He hauled loads of gravel. He mentioned once that he helped build the highway that ran past the farm where I grew up, but I think that was before they lived there. I don't know if he helped at the time the highway was paved, or before it was paved.
According to the copy of the farm title abstract I have, an easement was granted for use as a public highway on 8/29/31, but it seems the highway was already established at that time. Another easement was given for the highway on 4/30/49. I know the last one was for widening the paved highway or shoulder as I was 6 years old and living there. The highway was always paved as long as I can remember. So I can see my dad working on the highway in 1931, which would have been before my parents were married.
I do know they lived on a different farm before I was born, but I don't know the years they were there. I am fairly certain they did not move to the farm where I was raised until 1936 or later. That is when the previous owner handed the property over to my grandfather in a quit claim deed in which he gave up all claims to the title and interest in the property. That was because the former owner had gotten two loans from my grandpa in order to keep the land. Evidently he could no longer make payments on his mortgages, so Grandpa took it over.
I know my dad paid his dad rent for the farm until Grandpa died in 1957, and Dad inherited 1/2 of the farm that had the buildings on plus a large pasture, and his brother inherited the other tillable half. There was no way that Dad could make a living on the less than 80 acres, so he had to try and find a job. He rented out the tillable acres to the neighbor and quit farming altogether. I was a freshman in high school at the time.
If it weren't for this blog I don't think I would have processed all that and try to get a timeline of events. I wish my parents were here to answer the questions.
Posted by Lorita at 2:11 PM