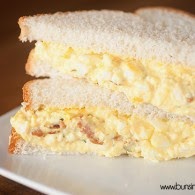 I saw this recipe on Pinterest a couple months ago. It had been laying on my kitchen table for at least 2 weeks, waiting for me to try it. The first week I couldn't make it because I only had one egg left in the fridge. After buying eggs, I got busy with genealogy again and basically did not cook. Period. Meals were peanut butter toast, frozen dinners, frozen pizza, leftovers, cheesy popcorn, yogurt.

And then I was sick of those 'sort of' meals, and so it was time to boil those eggs and fry that bacon that needed to be used or would soon end up in the garbage can.

If you like egg salad sandwiches I encourage you to give this one a try. I have to admit that it would be better with a little bit of onion in it, but then, I love onion in just about everything. I haven't added any yet, but I still have some egg salad in the fridge and I think I will be doing that shortly. This would also be good adding some cooked potatoes and making it potato salad, in case you get tired of egg sandwiches before it is gone. Another thing I like in either egg salad or potato salad is a little bit of finely chopped celery for that added crunch.

This recipe is found at Karly's recipe blog, Buns in My Oven. She has some other good sounding recipes there, too.

Add the eggs to a medium sized pot and fill with water to 1 inch above the eggs. Bring the water to a boil over medium heat. Remove from the heat, cover with a lid, and let sit for 15 minutes.

Run the eggs under cold water or place them in an ice bath until cold.

While the eggs are cooling, chop the bacon into bite sized pieces and fry until crisp over medium heat. Drain the fat and set aside the bacon.

Peel the eggs and mash them finely with a fork. Add the mayonnaise, mustard, vinegar, parsley, salt, and pepper and stir to combine. Stir in the bacon and cheddar.

Serve as a dip with crackers or between bread as a sandwich.

Using large eggs I found these instructions for boiling eggs worked very well. It seemed no matter what method I had used before I would get that ugly dark ring around the yolks. I think maybe part of the problem was I tried to hurry the boiling process and turned the electric burner on high first. I guess it takes the slower heating of the water to do the trick.

Now that I have this post completed, it is time to go add that onion and have myself an egg salad sandwich!
Posted by Lorita at 2:57 PM