I am a little tardy in getting these posts written but I still want to share, so I need to get caught up.

On June 1 a fellow group member suggested our group do a declutter challenge for the month of June. She suggested decluttering 5 items each day, plus work on an unfinished project. Since I have been trying to work at decluttering in a haphazard way, I thought this was a good idea. So that night, before going to bed, I avowed to start the morning out right, and not touch the computer until I got some work done.

I started out well, and made some progress most of the day. While I was heating my cup of water for morning coffee, I filled the kitchen sink and put dishes in to soak. I didn't have a lot of them like I usually do, so it didn't take long to get those done after I had my coffee and bowl of cereal. I even dried and put away right away. Now, I should have formed this habit decades ago, but I have stated before that I am one of the world's great procrastinators, especially when it comes to work. ;o)

My back entry/laundry room area was still a total disaster since the water heater started leaking. So that was my focus for decluttering and straightening up. As I worked putting things away, I also threw in a load of laundry since I was already in the room, and the laundry sorter cart was still in there.

Here is what I decluttered ~~ 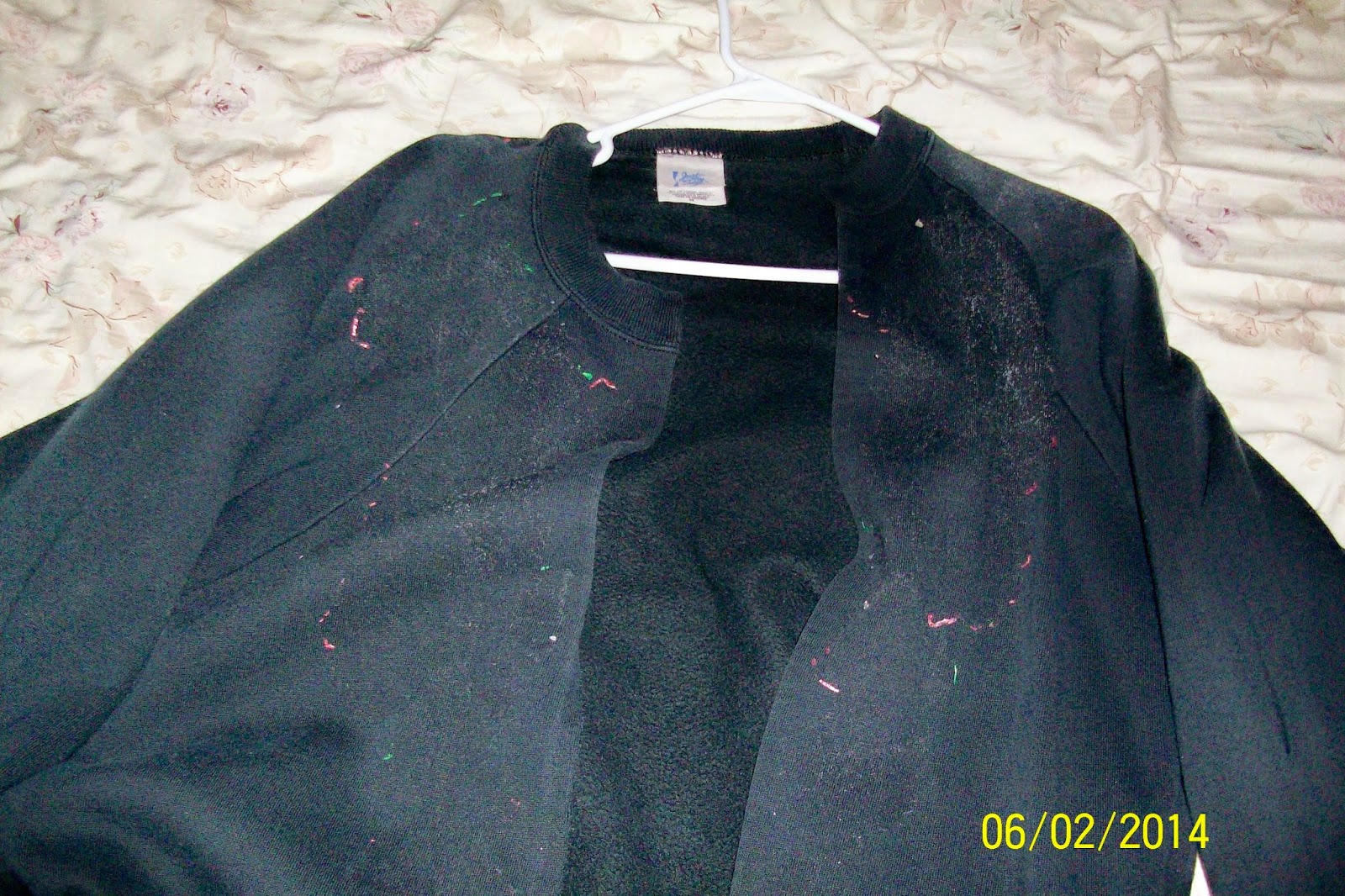 I had taken this black sweatshirt out of the closet the week before, but it hung on the door knob for several days. It is in good shape except for those pink spots. This was a pullover sweatshirt that I cut down the middle front, used bonding tape to make small hems, and then bonded a floral print fabric to fronts and back. That was a popular thing many years ago. Then I used fabric puffy paints to outline the roses, leaves and other areas. It was quite pretty. But I had used the wrong fusion stuff - using lightweight instead of heavyweight, so after several washings the edges started to come loose. I tried gluing them down but that just did not work well. After wearing it around home for awhile, I decided to just tear off the rest of the fabric so that I could still wear it. But as you can see, there are still pieces left, and there is some of the bonding residue left on the back. It just does not look very good in spite of being in good shape otherwise. It went into the donation box. Maybe someone else will try to do something with it, like figure out a cute way to cover all the bad stuff up, but I have no desire to try it. 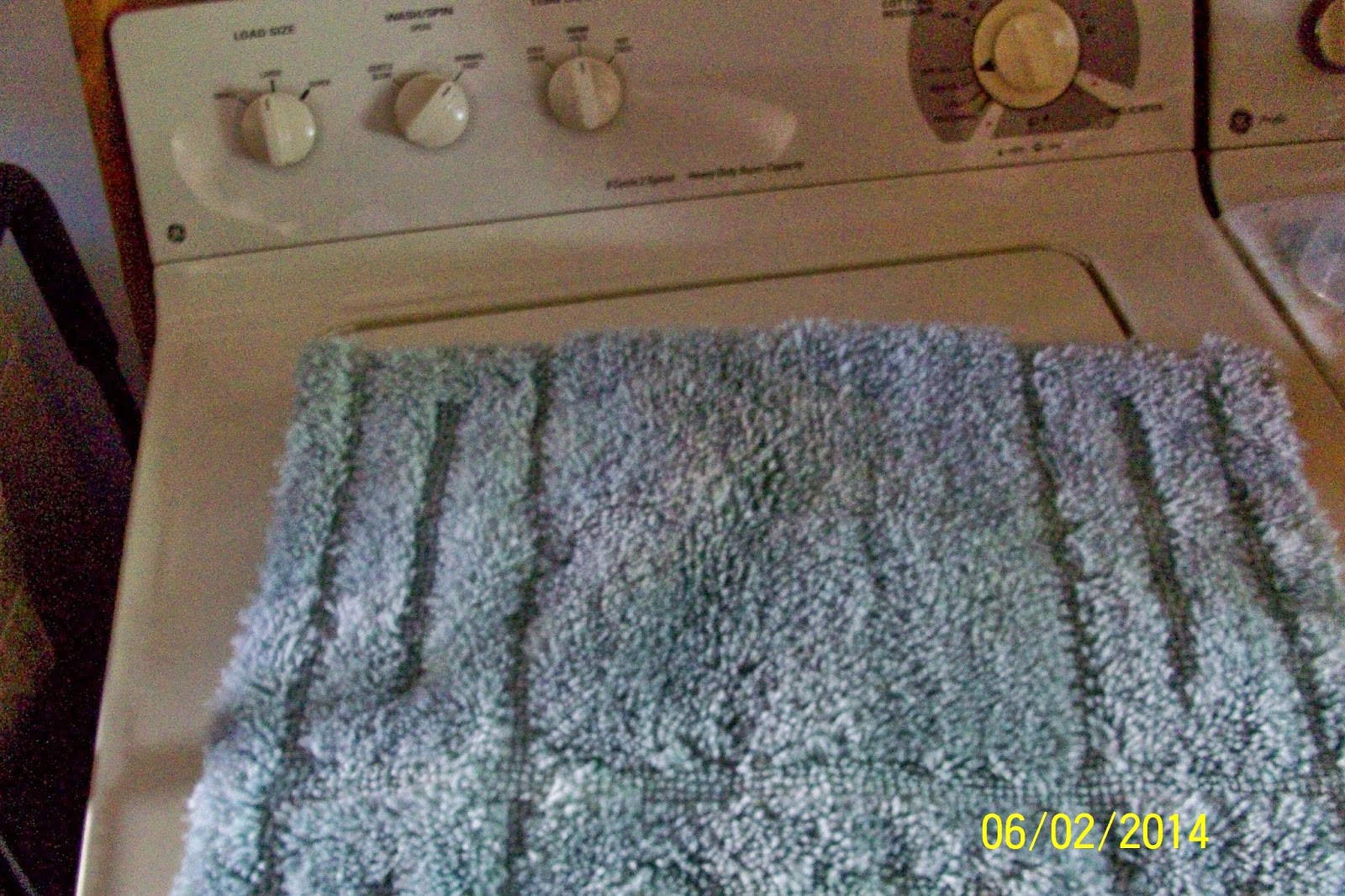 This is an old rug that looks good on the top yet, but it had foam rubber backing that had disintegrated. I had used it by the back door anyway, but then Felix decided it was there to pee on! No matter how often I washed it and sprayed it with pet deodorizer, he would pee on it. I put a plastic garbage bag under it for awhile but got tired of constantly washing and spraying. Plus that blue did nothing for the mottled orange/rust carpet it laid on! I have no other place in the house to use it, so it actually went in the garbage. I had gotten my money's worth of use out of it long ago. 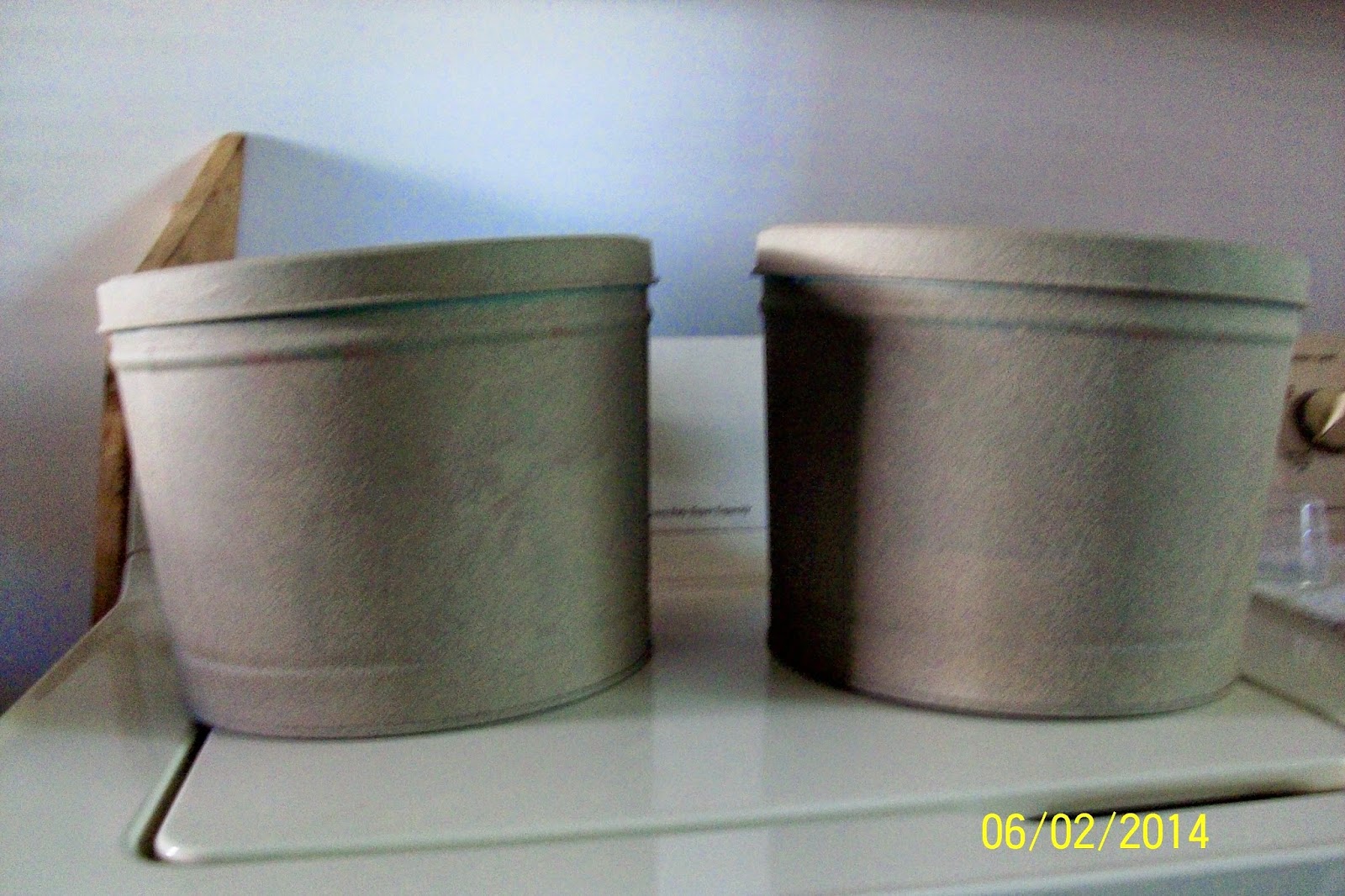 I counted these as 2 of the 5 items. These are popcorn tins with Christmas designs on blue background. A couple years ago I got the inspiration to paint them with sand textured paint to make them look more like planters, and use them to store all the plastic shopping bags that one accumulates. I had a spot in the kitchen for them as that is where I unload groceries. That worked for awhile - until I took the blue desk out of the kitchen and replaced it with a tall console table. That console table is longer than the desk, but not as deep, so it fit perfectly in the spot, but did not leave room for these tins. I put them in another space but they were really too big for that spot, and I kept knocking into them, and they became a nuisance. Donation. I will check with my daughter first to see if she has a use for them, otherwise Goodwill, here we come. 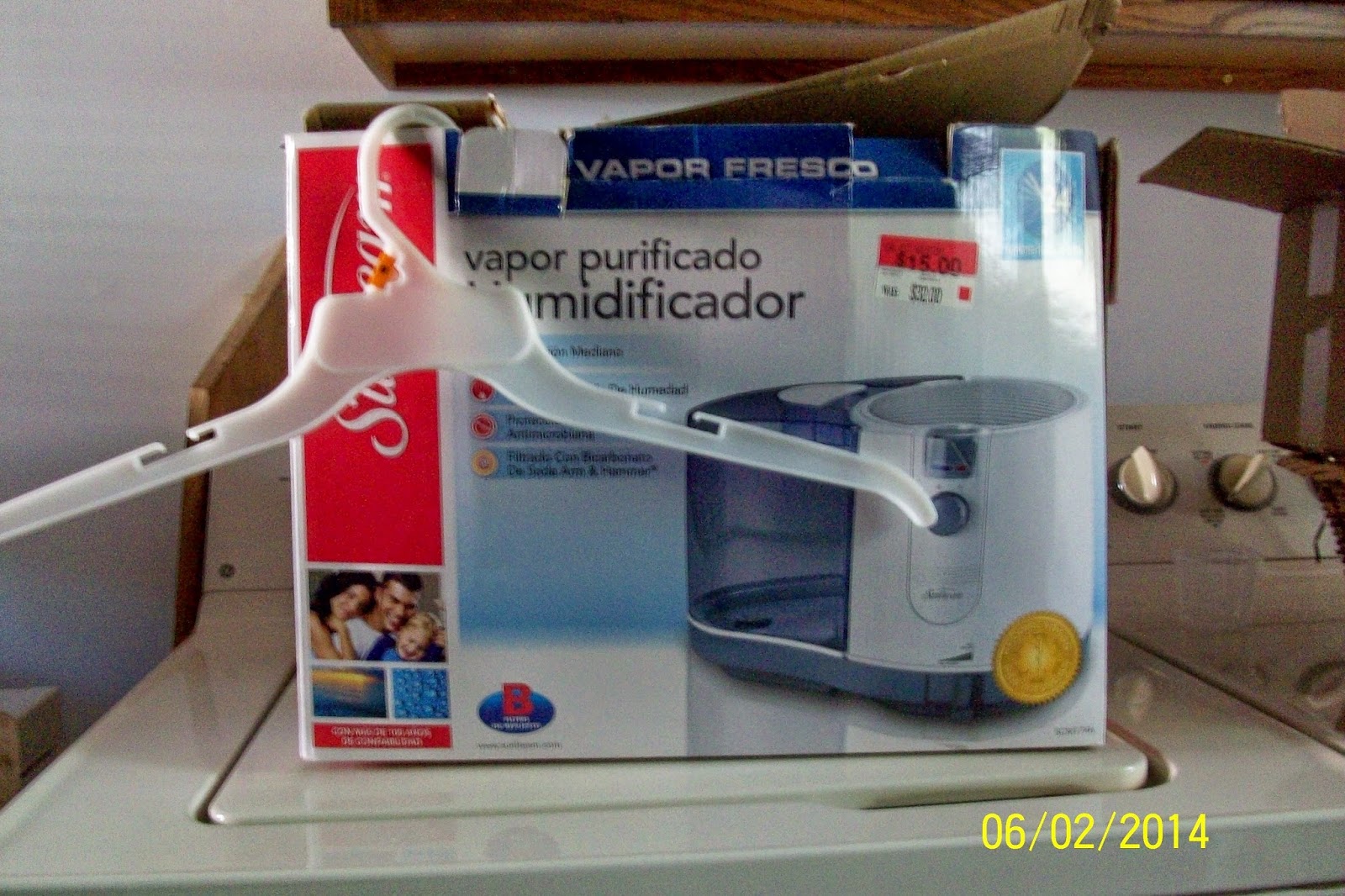 Here are the last items. An empty humidifier box and a plastic hanger that came with some clothes I bought. It is a sturdy one, so I kept using it. But when I cleaned out the bedroom closet I found several empty good hangers, so there is no need to keep this one. I had decluttered several other hangers that I never use and had collected dust on them! So this one is added to that group. I had been using the box to store the humidifier in during the summer. But it actually takes up more room than just the humidifier itself. I found a good place to store that now, so no need for the box. It was getting a little dilapidated anyway. So that will go out with the recycles.

So that is actually 6 items decluttered, and the laundry/back entry is looking much better. It isn't finished yet, but at least I can now walk through without weaving through the small path between the 'stuff'.

After I got all that stuff out of the house, I washed off the vinyl flooring remnant my son got down from the garage rafters, laid it on the floor where the litter boxes sit, after I vacuumed the area well. So that is a project finished.