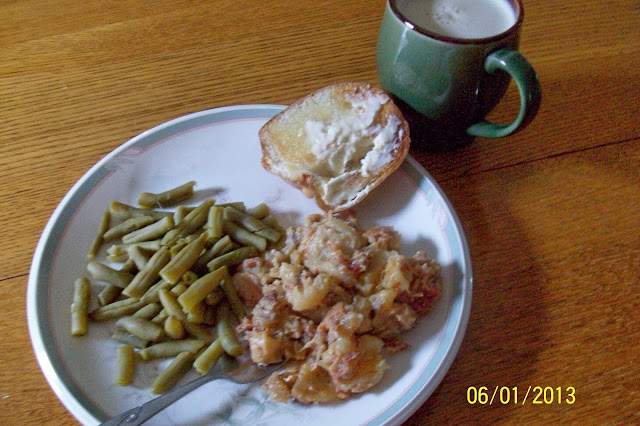 Maybe this doesn't look so appetizing on the plate, but let me tell you, it was delicious! The picture won't be appearing in any magazine food section. LOL (no, I didn't set it on the floor to take the picture - this is my table top)

scalloped potatoes and ham
green beans
toasted French bread with real butter
coffee with hazelnut creamer
Just good old Iowa farmer's meal. I had some leftover ham in the freezer that had been there long enough, and I ran across a recipe for crockpot potatoes and ham that sounded so good, and something I haven't had in a long time. The recipe is one I printed from an internet group that I belonged to for awhile. It was all crockpot recipes and now I have 2 big binders full of the recipes that sounded good to me. I will never get them all tried!
I found this one quite tasty. Next time  might add a little more cheese but it is good the way it is written too. Here is the recipe ~~
CROCKPOT HAM & SCALLOPED POTATOES
6-8 slices ham
8-10 medium potatoes
chopped onion - to taste
1  cup grated cheddar or American cheese (I used sharp cheddar)
1 can cream of celery or mushroom soup (I used mushroom)
paprika ( omitted -because I was too lazy by then to get it)
Put 1/2 of ham, potatoes and onions in crockpot. Sprinkle with salt and pepper, then grated cheese. Repeat with remaining half. Spoon undiluted soup on top. Sprinkle with paprika. Cover in crockpot and cook on low 8-10 hours -- or on high for 4 hours.
I would advise to spray the crockpot with something like Pam first, or the plastic crockpot liners for easier cleanup. I too often forget to do that until it is too late.  About half way through cooking﻿ I also stirred it up to get the soup to coat it all as it was just sitting on top yet.
﻿