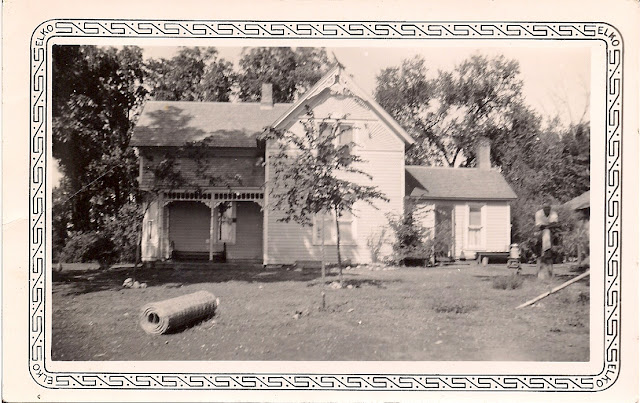 My Childhood Home on the Farm
﻿
My mother still cooked with the old cookstove on the farm until they moved to town in 1960. She also had a propane gas 'modern' stove as well, mostly for cooking in the hot summers. But in the winter Mom started a fire in the cookstove, partly for the heat in the drafty old farmhouse. But she also cooked on top of the stove, baked in the oven, and there was a reservoir on one end where water was kept warm. I don't know how she did so well with baking in that oven since it would seem, to me, to be very hard to keep the temperature regulated. But she grew up with that so had lots of practice. She also would heat the wash water for laundry in a big copper boiler on top of the stove. Then it had to be carried to the washing machine. Nothing was easy. They didn't burn wood in the cookstove, but used old corn cobs saved after shelling corn from the field. The cobs were stored in a building next to the house (the back end barely visible in far right of picture above), and the front part of that long building was the garage, then the cob bins and next to that was the chicken mash (feed). Sometimes when we brought a basket of cobs in the house, a mouse would manage to sneak in with them. Eeeek! They would climb out when least espected!

One of my memories about a mouse is when one ran up my dad's leg, under his overalls! That is the only time I ever saw my dad dance!

We had to carry that chicken mash to the chicken house in buckets, sometimes loaded onto a child's Radio Flyer wagon (mine, and still have it). We also had to carry large buckets of water from the well for the chickens. That well wasn't very close either. Hard work. Nothing was automated in those days. Didn't have a garden hose either as there were no faucets to attach one to. It was a hand pump, the kind with a long handle that we moved up and down.

That is also how we got our drinking water. We had a white enamel pail that was set in the kitchen, and it had a long handled ladle in it. We drank from the ladle. Yes, we all drank from the same ladle, and we did not get sick. If one had a cold the water was ladled into a glass for that person. That water had a very strong metalic taste, but since that is what I grew up with, I thought it tasted really good.

There was no indoor plumbing at all, except for a cistern pump at the kitchen sink - also hand operated. And there was a drain pipe that ran outside to a small sump hole. I am very thankful we had that otherwise there would have been a big bucket under the sink that would have to be emptied, or the dishpan that we washed the dishes in would have to be taken outside and tossed. That was sometimes done anyway in the summer if we hadn't had rain for awhile. The flowers needed watering, and Mom had lots of flowers planted outside. 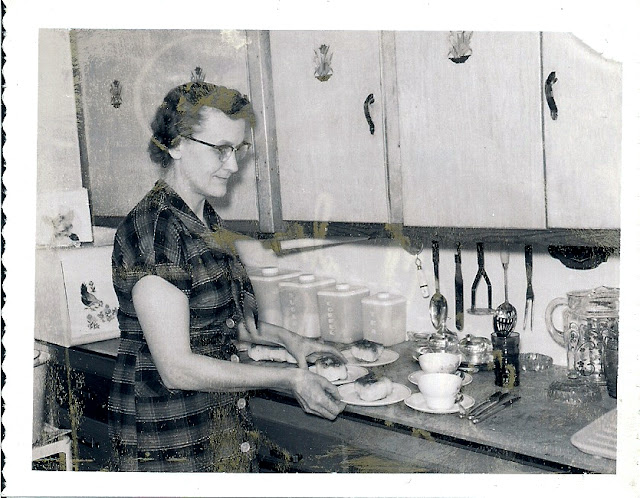 Since there was no indoor plumbing, that meant sponge baths and washing hair in the kitchen sink. All water had to be heated on the stove. We used a cup or small saucepan to pour the water on our head. In the winter the sponge bath was often performed next to the large kerosene heater in the dining room. The family had to be warned to stay out before starting! One year my dad bought a bathtub size galvanized tub that we would bring into the kitchen, next to the cookstove to take our baths on Saturday nights. We took turns using the same water. (gasp!) I am thankful I am an only child!