Do you think I have enough cook books? The binders on the lower shelf are full of recipes printed from emails and the internet. I have one with the title "Menus". I do have a few in there but had good intentions of making up more menus, and that hasn't happened yet. Some of those menus I have copied from others, including Menus4Moms group, but they no longer send them in email, and I forget to check the website. They would include recipes with the menus, and shopping lists for each menu. Nice if you use them. Laying on top of the binders is a stack of loose recipes that haven't gotten into the books yet, because I want to try them one day soon. And there is a file folder full of some taken from magazines and newspapers. 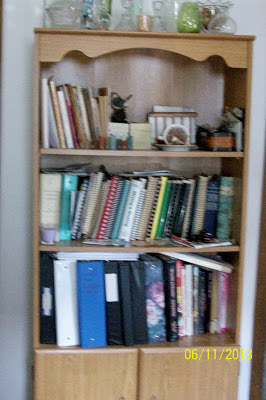 The middle shelf is mostly various church cookbooks from the area, or from areas where I used to live. Nice memories in those books whn I see the ladies' names. There is also one that was my mother's, and is the kind you write in your favorite recipes and paste in those that you clip from newspapers and magazines. She died early in 1971 so they are older recipes. Some of those made it into my own binder like that as they became our favorites as well.

Top shelf - left side is recipe pamphlets and those that came with appliances. Next to those are two recipe boxes - one is mine that I started when I was in high school home-ec classes, and the other one is Mom's. Then there are a few odds and ends, including an envelope along the side that holds my coupons, if I get them in there. I see there are some laying in front of the books on the middle shelf.

I think it is time for me to get those shelves straightened up and give them a good dusting. The same goes for the collection of glass and crystal vases and dishes that sit on the top. That really looks junky, but have no room anywhere else to store them, plus they should be on display, just a better one.

I should have opened the doors at the bottom as that looks even worse! And I know there are some things I can get rid of in there. When I get around to that part I will try to remember to take before and after pictures of that. And once I get back to the upper shelves, I will get an after picture. But this is it for now. I have been busy with genealogy and want to work more on that right now, and the decluttering/cleaning will have to wait.

Labels: before and after, home keeping