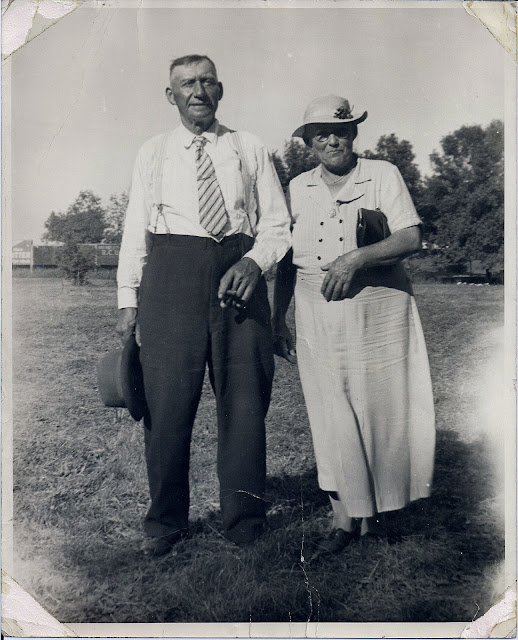 Opa and Oma
My Dad's parents - Aielt and Aleida
I don't know when this was taken, nor how old they are here.  I do know that Oma died April, 1939 at age 66, so I know this was taken in the 1930's. Since I was born in 1942 I never met her. And by the time I can remember Opa, he had some dementia, probably Alzheimer's, though I doubt that name was used at that time. If you look closely, you might see a cigar in his left hand. I do remember him smoking stinky cigars often, and sometimes smoked a pipe. The pipe smelled better. He used Prince Albert in the can. Any of you remember that old joke? Kids would call stores and ask if they had Prince Albert in the can, and if they said yes, the kids told them they better go let him out. I just remember my mom looking for that brand especially at Christmas time as that would be his gift.
Opa would give us younger grandkids a silver dollar for our birthdays and I still have at least 2 of them. Somewhere I have a picture of Opa and me sitting on a bench outside when I was little. I will have to do some more digging to find that.
I can see the similarity between my two aunts and Oma, and most of my uncles looked a lot like Opa. I wish there was a picture of him wearing that hat in his hand.﻿ 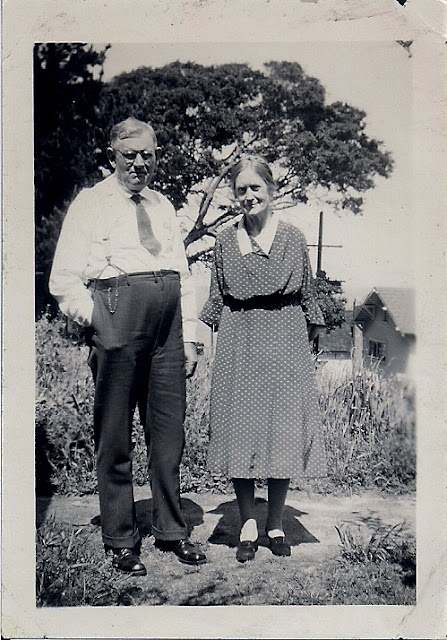 Grandma and Grandpa
My mother's parents - William and Ada
I guess we called the Grandma and Grandpa instead of Opa and Oma so we could tell which ones were being talked about. This picture was taken in 1945. Grandpa was 65 and Grandma was 60. I didn't know them very well either as they moved to California a few years before I was born. I guess they didn't have a lot of money as I don't think they ever came back to Iowa on a trip. I think I saw Grandpa once, and Grandma three times. Grandma did not hear well, and my mother also had to wear a hearing aid, so I am thankful I still have very good hearing.
I remember their little house, and remember this really odd smell there and I didn't know what it was. Years later I found out it was eucalyptus. I don't know if she had some in the house and using it for a room deodorizer, or if there was some growing outside. I still don't like the smell but it will always remind me of their home.﻿