Thanks to findagrave.com I was able to find my great grandmother's grave. I didn't know, or didn't remember, her first name so had no idea how to look her up in the genealogy sites. I had tried to find the grave where I remembered it when I went along with my mother to put flowers there on Decoration Day (what is now called Memorial Day). But walking all over the area I never came across it. And now I found a picture of it, with her name, date of birth and death!

And then, as I was looking through the picture album one more time, to find pictures to scan for the blog, I found this picture of her! Plus, today I found a picture of the gravestone in the book as well, but it is just of the large stone that has only the last name. 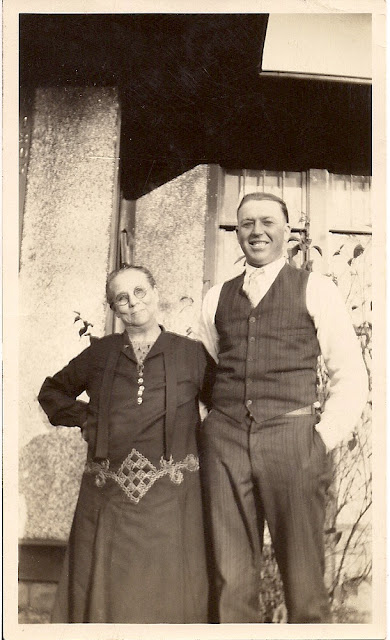 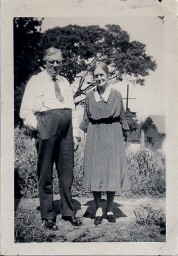 After finding great grandma's grave, I couldn't find a record of where my great-grandfather was buried, so that was another mystery. I think I found the answer today!! There is a small stone on the other side of the big one where great- grandmother is buried, but it just says "Father" above the dates. What threw me off was that the date listed on the findagrave.com site had the wrong birthdate. When I looked at the pictures again today I noticed the discrepancy and realized that was great-grandfather's birth date. So mystery solved! Goes to show that you need to look at information several times before things come together. This has all been very interesting but tiring as it takes so long. I wish I had a picture of great-grandfather. Maybe I will find one as I go through my pictures, but I don't remember having any.

One interesting fact I found by chance, is that this great-grandfather and several other Germans from Illinois moved to Iowa in 1883, and they started the country Lutheran church there. That church is about 3 miles north of the farm where I grew up. And, again thanks to findagrave.com I found the gravestone of his first wife, my grandfather's birth mother, is in that church's cemetery. She died in 1888 so that stone is really old and hard to read. I am so thankful that someone took that picture and put it on that site. I really had no idea where she might have been buried.

UPDATE: I have since learned my great grandmother's grave is not in the country church cemetery. Instead, she and an infant are buried in a very small cemetery less than a mile from the farm where I grew up! Most of the stones have been destroyed or disappeared, and it has been made into a nature preserve so it is not mowed. I didn't even know this cemetery was there. I stopped there and could barely see her stone from the road. I looked at a satellite view on Mapquest.com and I could see the shadow of the tower shaped stone!

I was able to find some of the census reports on a free website, and through scanning a lot of information I think I found my great-grandfather's middle name and the names of his parents. And I found the maiden name of my step-great-grandmother and the names of her parents. I haven't had time to look into that any further, but my mind is swimming right now. And time to end this. Several mysteries solved!
Posted by Lorita at 12:30 AM