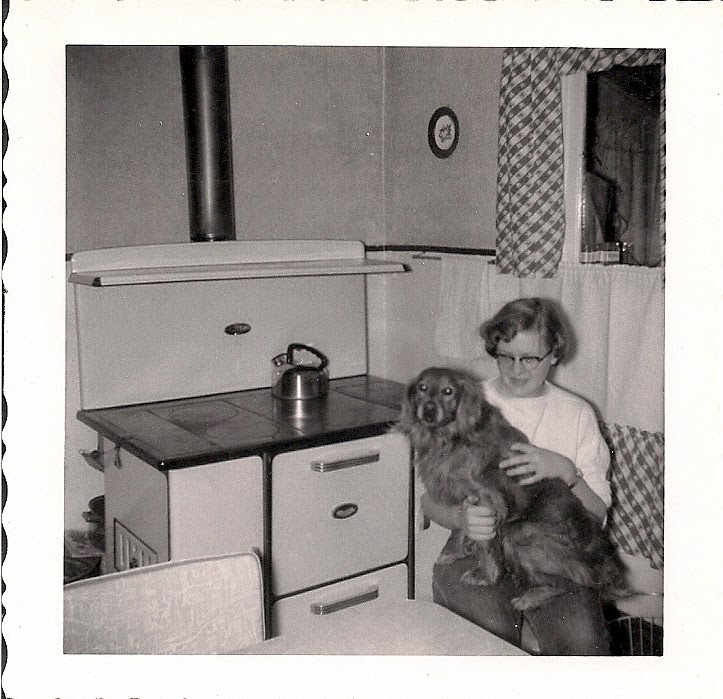 Going through some old albums I found this one picture of the old cob burning cook stove we had in the kitchen. Mom also had a more modern gas range on the other side of the kitchen, but she used the old cookstove quite often, especially in the winter as it warmed the kitchen up. There was no heat in the kitchen otherwise. The house had two large kerosene burning space heaters, one in the living room and one in the dining room. The stovepipes went up through the floor of the two bedrooms upstairs, then out through the roof. In the floor around the stove pipe was something like a register. It had holes in it that allowed the rising heat from the heater to come up into the bedroom and provided a little bit of heat up there. Not much, but it helped. They could be closed if the rooms were not used.

It still amazes me how women were able to bake accurately in these stoves. They had to know how many cobs or how much wood to put in the firebox to keep the oven at the right temperature. Mom heated the wash water for laundry in an old copper boiler on top of the cookstove. There was also a water reservoir on the right end, so as long as there was fire in the stove we had warm water. The reservoir is behind me and the dog, Taffy. That is the last dog I had on the farm before we moved to town in 1961. And Mom was still using that cookstove until then as well. She may have been the last one in the area to still use one.

On the other side of that window is an enclosed porch. That is where the old wringer Maytag washing machine and rinse tub sat. And there was a chest freezer at the other end. Before we got the freezer Mom rented a freezer space in the local town locker inside the butcher shop. They used that mostly when they would butcher a whole beef or hog. Town was only a couple miles away, but what an inconvenience having to run to town to get the frozen meat for a meal. That freezer also held the home butchered chickens
Posted by Lorita at 12:30 AM