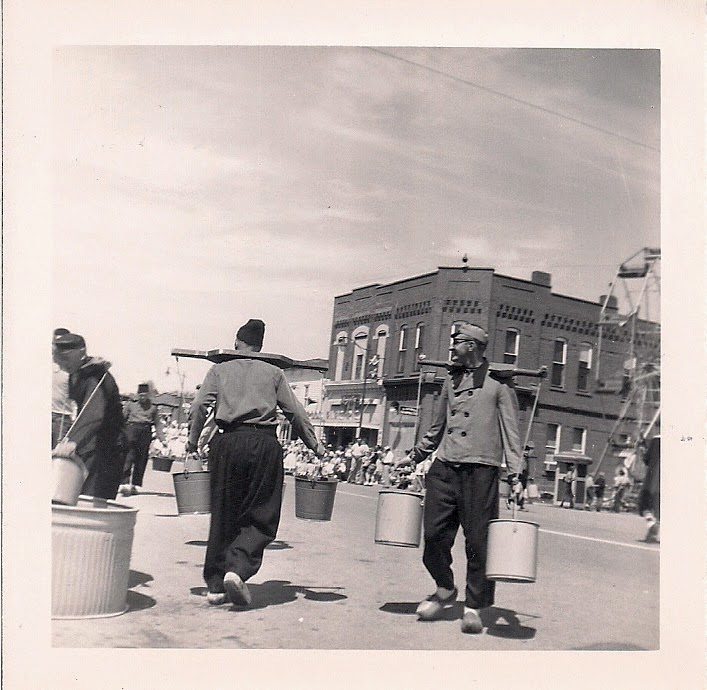 Tulip time. I should say, Tulip Festival time. Every spring a neighboring town, Orange City, Iowa, has a 3-day celebration called Tulip Festival. This year it is May 15-17.

Orange City is proud of its Dutch heritage and show it off during this time. The pictures I show here are not recent. I am not sure what year - late 50's or early 60's I am guessing. There are two parades each day, afternoon and evening. The parades start with street washing. You know, the Dutch are noted for their cleanliness! As the above picture depicts, the men, in authentic Dutch clothing, dip their buckets into the stock tanks filled with water along the parade route. They then throw the water out on the street. Even the little boys, and boys of all ages are out there with their small pails. 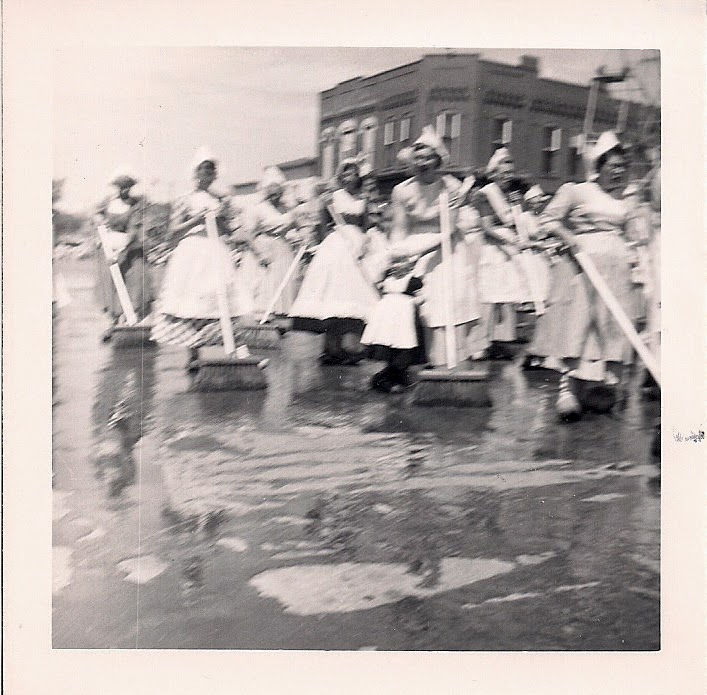 Then the women and girls come along with their big street sweeping brooms and scrub the street clean. They also wear authentic Dutch clothing. I almost forgot. They also all wear wooden shoes. Once the street is clean the parade can begin.

The event has changed a little over the years as new things are added to the festivities. And the city now requires each business building have a Dutch facade to make the town resemble a village in Holland. They had not done this yet when these pictures were taken. There are thousands of tulips planted all over town, and hopefully in full bloom during this time. Last year and this year the city fathers have been concerned that they would not be blooming in time because of our late springs. I know my few tulips are just barely showing a bud stalk, and a long time before they bloom. But there are early bloomers that might be ready in time.

The high school band is the only band in America that marches in wooden shoes. They have been invited to march in the Rose Bowl Parade twice now, and have done other traveling appearances over the years. The Rose Bowl Parade is long and those wooden shoes wear out before they are finished, so they have people along the route with extra shoes so they can switch them. They also wear several pair of socks - all at once - in order to prevent blisters and provide a little bit of comfort. It is NOT fun to march in wooden shoes!!

If you can't decide where to spend your vacation next year, you might want to plan to come to northwest Iowa and take in the atmosphere and fun of the Dutch Tulip Festival. It always draws a big crowd from all over the country.
Posted by Lorita at 12:30 AM